ZOMBIELAND: DOUBLE TAP Is A Warm Welcome To A Familiar World (Review) - Nerdist

ZOMBIELAND: DOUBLE TAP Is A Warm Welcome To A Familiar World (Review)

Ten years is a long time to wait for a sequel. So many things can happen in the interim: Social and political climates can change, humor can evolve, cast members can explode onto the scene in a major way or recede into the background of relevancy. But the alchemy was just right for another Zombieland, the 2009 breakout genre film about a troupe of zombie apocalypse survivors forced together by circumstance, who forge a mini family in the midst of their adventures. It turns out, hangout zombie films rarely age out of style, and Zombieland: Double Tap is proof that strong characters and writing are really all you need to earn another place at the table. The film isn’t reinventing the wheel or adding much to the zombie mythos, but it’s time well spent in a world you probably won’t realize you missed until you step back into it.

Director Ruben Fleischer and writers Rhett Reese and Paul Wernick (along with David Callaham) return, joining their impressive cast: Jesse Eisenberg as Columbus, Emma Stone as Wichita, Woody Harrelson as Tallahassee, and Abigail Breslin as Little Rock—so named for their home cities before a zombie apocalypse decimated most of the global population. In Zombieland: Double Tap, the team is still together, but time has worn at their group dynamics. Little Rock is nearing adulthood, and is itching to flee the nest. Columbus and Wichita’s romance is in a dry spell; he’s still hopelessly attached, while she frets anxiously, worried that their survivalist situation is dictating their love affair instead of natural desire. And Tallahassee is still the same old hardened soul, obsessed with his own self-interest and machoism, at the expense of the others. Things reach a turning point early in the film, as the group takes up residence in an abandoned White House. As they freely roam the politically sacred grounds—having their way with relics like a portrait of President Taft and the revered Hope Diamond—their dynamic shifts into its natural next phase. Little Rock and Wichita leave for greener pastures, leaving an anxiety-ridden Columbus and a disaffected Tallahassee to fend for themselves. 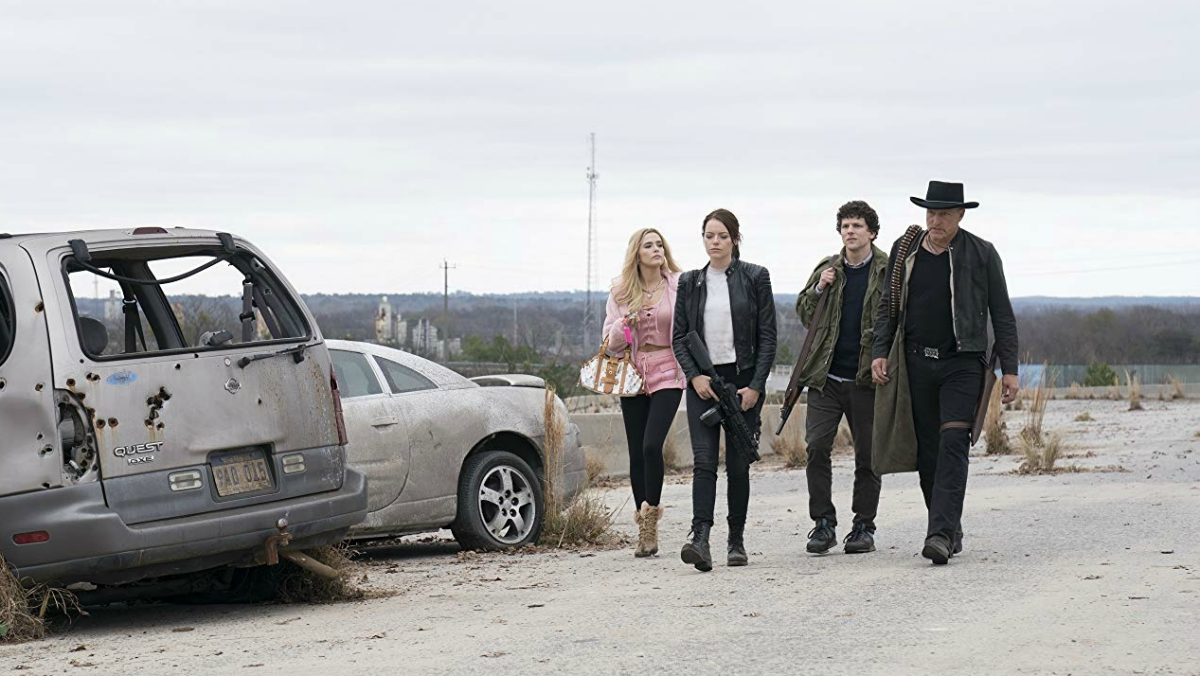 But, when rummaging through a nearby mall, the two soon stumble on someone else who temporarily fills the void: a scene-stealing Zoey Deutch as the glib Madison, a ditzy valley girl living in a refrigerator whose vocal fry could cook an egg. She adds a hilarious new element to the team, and it’s her presence that lends some interesting tension to the story, especially when Wichita returns and finds her ex deeply infatuated with a new woman. Like the first Zombieland, Double Tap then transitions into a roadtrip movie, with the gang on a quest to track down Little Rock—who meets a pacifist hippie named Berkley on the road (much to Tallahassee’s chagrin), and goes with him to a gun-free commune called Babylon. As you’d expect, their travels aren’t entirely smooth—a temporary pitstop in Graceland yields some stressful hilarity, for instance—but it’s the journey that gives the movie its soul.

Also, it wouldn’t be a zombie sequel without a little evolution. This time around, there are some new iterations of the undead: Homers are slow-moving and dull; Hawkings are scientist-smart but not quite on par with the living; and T-800s are a new, more capable strain of zombie, who aren’t so easily taken down. It’s the latter that present the biggest hurdle for our heroes, who have to outsmart the baddies in ways that challenge both their survivalist status quo and their relationship with those around them. It’s a zombie apocalypse, after all—and no one is immune from the plague. 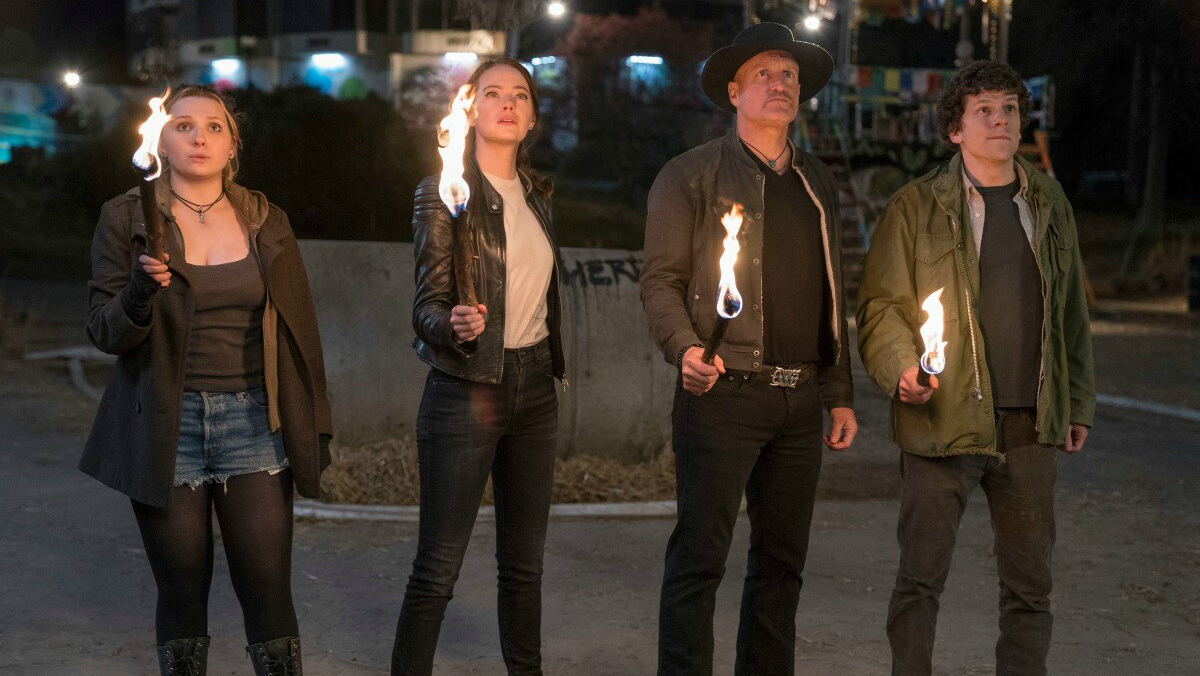 Zombieland: Double Tap doesn’t have to try too hard to win back audience affection. It’s clear within minutes—as Columbus ticks through his list of updated rules, which pop onto the screen in that bold, familiar font—that this is a nostalgic world, with an eager cast bringing their A-game to the new material. Without that sense of camaraderie, the sequel wouldn’t quite work, but everyone—from A-lister Stone to fan-favorite Harrelson—seems game to be back. Part of that’s due to Fleischer, who’s worked with most of the cast in other projects during that 10-year gap. That familiarity and comfort is evident onscreen; it never feels like these people spent any time apart, so natural is their chemistry. The new cast also blend in pretty seamlessly, from the aforementioned Deutch, to Avan Jogia as the immediately obnoxious Berkley, to Rosario Dawson as a roadside companion for Tallahassee, and Luke Wilson and Thomas Middleditch as a familiar-seeming duo who add a little bit of chaos to an already chaotic scenario.

The movie isn’t as funny or memorable as the original, and doesn’t have anything pressingly urgent to add to zombie lore. In fact, the zombie stuff feels pretty secondary, to the point that you almost forget the undead exist for large swaths of time. It’s hard to say if that’s much of a ding, since the story is more concerned with human drama, and rightfully so. But it’s noticeable, especially when things crank up in scale in the final act, and you start to realize that lack of connective tissue makes for a bit of an uneven ride. But ultimately, Zombieland: Double Tap operates exactly as you’d like and expect; it’s a hangout movie like the first one, with characters that have come to feel like family. For a late summer movie, it’s just as entertaining and escapist as it needs to be. Should Fleischer and the team conspire to return in another decade, they’d be more than welcome.