You're The Cultist In This 'Unspeakable' Cthulhu RPG: Sigil & Sign - Nerdist

You’re The Cultist In This ‘Unspeakable’ Cthulhu RPG: Sigil & Sign

Powered by Geek & Sundry
by Ben Riggs
Who doesn’t love to play the villain? 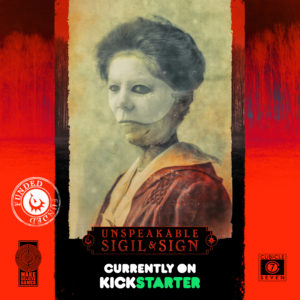 Mark Rein-Hagen, creator of the legendary Vampire: The Masquerade, is teaming up with Cubicle 7, publisher of stunning products such as Adventures in Middle-earth, to produce CA Suleiman‘s Unspeakable: Sigil & Sign, a Cthulhu Mythos tabletop role-playing game where you will play cultists with apocalypse on your mind.

Do I Get to Raise Cthulhu?

According to Cubicle 7, Unspeakable: Sigil & Sign asks players to be the bad guy.

“[P]layers take the role of cultists, members of an apparently evil organization, dedicated to the destruction of mundane reality. The game explores the multifaceted themes of what it means to be monsters, looking out on a world that is as disturbing and maddening to them as they are to it.”

Slavering like Shub-Niggurath in rut at the thought of this new way to play in Lovecraft’s universe, I contacted Sigil & Sign creator-developer CA Suleiman for more details. What he had to tell Geek & Sundry readers, like much of HP Lovecraft’s work, was damnably vague but tantalizing:

“I can tease a couple things here for your readers: One is that the Unspeakable setting is a place they think they know, especially if they’re familiar with the source material, but it’s also one that they don’t really know much about at all. Trust us, the Mythos-touched world circa 1930 looks a lot different from the other, hidden side. Another thing I can tell you is that players will not take on the roles of ordinary human cultists, nor will they be expected to roleplay fully monstrous entities (shoggoths, and so on). Rather, they will be playing something in between those two polarities, and therein lies the fun.”

There he leaves us, force to imagine what breed of shambling, half-monster, half-cultist abominations players will portray in Sigil & Sign.

Unspeakable: Sigil & Sign is the result of a partnership between Rein-Hagen’s Make Believe Games and Cubicle 7.

According to Cubicle 7 creative director Jon Hodgson, Mark Rein-Hagen, and creator CA Suleiman put the word out that they were looking for a publisher interested in a “classic era Mythos game where you play the cultists.” Rein-Hagen and Suleiman “wanted to focus on the creation side of things. Due to [Cubicle 7’s] success with the Cthulhu Britannica London Boxed Set, and our general rep for high production quality, our name came up several times as a recommendation.” Cubicle 7 arranged a meeting at Gen Con 2016, “and the rest is history, as they say.”

CA Suleiman said that the partnership between the two companies follows the design studio format. He said Make Believe Games “owns the game and handles creative development of the content; Cubicle 7 is publishing the game, which includes running the crowdfunding campaign and delivering the product to distribution.”

Hodgson added, “[W]e’re all huge fans of Mark’s work on games like Vampire. He’s a legend.”

After a long hiatus, Mark Rein-Hagen re-entered the tabletop role-playing game field with 2015’s I Am Zombie. Rein-Hagen said:

“[I]t feels great to be back. I do have this deep and abiding love for the art of role-playing. But this game is very special because of the equal passion I have for Lovecraft’s Mythos. I mean he literally taught me what horror was, he introduced me to… a cosmic sense of time and space. To be working in that space is not something I ever really expected to do— I didn’t imagine there would ever be an new idea so solid and profound to warrant it. Now that I am here, playing in his sandbox, I can’t put into words what a delight it is.”

Unspeakable: Sigil & Sign is Kickstarting right now. Bask in all its evil glory!