Everyone loves a good spy thriller with a bit of mystery—that’s why James Bond and Sherlock Holmes still mange to roll out movies every year. Beyond the fast cars, gun fights, and figuring out the last piece of the clue before the bomb goes off, we love these movies for the humor and romance that is thrown in there as well. These thrillers always have a classic vibe that rarely feels out of place in the modern area. So, if you love putting together clues or diving into danger with only a pistol and your wits, chances are that you’ll also love these anime picks.

Lupin III is the world greatest thief. He always sends a calling card to who ever he plans on stealing from. This never hinders him though, since he is the world’s greatest thief. He is joined by Daisuke, an expert marksman; Goemon XIII, a master swords man; and Fujiko, a femme fatale and Lupin’s love interest—who isn’t against using Lupin to get the loot for her self. They are all pursued by Koichi, a detective who has made it his life’s work to catch Lupin. The show is fast passed with adventure at every turn. Bonus? Lupin is charming and just as easy to fall in love with like that dashing double-o seven.

Jimmy Kudo is—well, was—a detective. During a case, the young detective is forced by The Black Organization to drink an experimental poison. Instead of killing him as it was meant, though, he is transformed in to a child. Jimmy hides his identity—going by the name Conan Edogawa instead—in order to help a CIA agent throughout the series in his new kid body. Every episode is a new mystery that’s solved by Conan while he tries to find a cure for the poison and bring them down The Black Organization. This show iteration was known as Detective Conan, as it couldn’t be called Case Closed for legal reasons.

Set is the city-state of Paradigm City, The Big O takes places in a distant future. The city is the only sign of human life in a vast desert wasteland and is controlled by the ruthless Paradigm Corporation. Forty years before the story, “the event” happened, destroying the world outside the city and erasing everybody’s memories. Roger Smith is a negotiator, some one who fixes Paradigm city’s problems. His personal assistant is Dorothy Wayneright, who some times helps him on his cases. Each episode deals with a particular job and getting closer to the truth behind the event. If you’re looking for a bit of action as well, Roger hops on his giant robot to take care of things when he needs more than his wits and a roundhouse kick. Who needs a solid lead when you have a massive mech?

Crime sweeps over the galaxy as humanity spreads from planet to planet. In order to combat this, the Inter Solar System Police (ISSP) legalizes bounty hunting. The show follows the crew of the spaceship Bebop—Spike Spiegel, a former hit man; Jet Black, a former ISSP officer; Faye Valentine, a con-artist; Edward Wong, a skilled hacker; and Ein, a welsh corgi with human-like intelligence—on their adventures to try and catch various bounties on the heads of criminals. Beyond catching crooks for big bucks, the series dives head first into their dark pasts in order to uncover what has lead them to bounty hunting. Dark, sad, and sometimes funny: Cowboy Bebop brings the perfect mix for whatever you are looking for in an anime.

Chiko, Heiress of the Phantom Thief 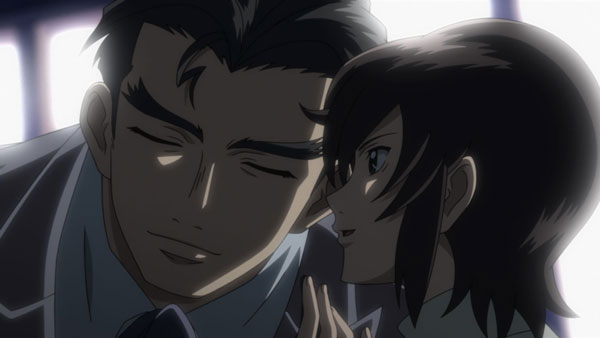 After her parents die, Chizuko Mikamo is forced to live with her relatives. Her aunt is slowly poisoning her in order to steal her inheritance—a priceless ruby. After 20 Faces—a thief who also wants to steal the ruby—sees the condition Chizuko is in, he takes her with him to protect her. Chizuko, an intelligent girl who loves detective novels, also becomes a thief alongside 20 Faces and his gang. Two years later and now a master thief, the mystery begins for Chiko. After being “rescued” by her aunt (who still wants the ruby for her self), and with 20 Faces thought to be dead, Chiko must not only attempt to rid herself of her aunt, but also solve the mystery behind 20 Faces maybe-death, maybe-disappearance. This story is the darkest on this list, but well worth it.