One of the hidden strengths of Dungeons & Dragons Fifth Edition is the ease in which material for older editions can be used. Whether an old adventure is downloaded from Dungeon Master’s Guild in PDF form or reclaimed from the basement after years of being stashed away, the stinginess of the current edition’s release schedule is softened by the idea that old material just takes a little time to be brought forward. Wizards of the Coast has gotten in on this activity through the most recent Dungeons & Dragons Fifth Edition release, Tales From The Yawning Portal. That book converts a sampling of memorable adventures from across several editions of Dungeons & Dragons to give new players a sense of history and old players some guidance on how the pros handle converting older material. There are hundreds, if not thousands of dungeons from the 53-year history of the game, and two of the most popular ones will soon be joining the adventures in Portal for being updated to Fifth Edition rules.

This weekend at GaryCon in Lake Geneva, Wisconsin, Wizards of the Coast announced another project bringing classic D&D content up to date with the current edition. They announced a partnership with Goodman Games to print collector’s editions of classic D&D adventures which not only reprint the original material but also add additional material to allow fans of the current edition to experience them as well. Goodman Games is an excellent choice for this partnership, as its Dungeon Crawl Classics line has dozens of adventures keeping the feel of old-school dungeon crawling alive. 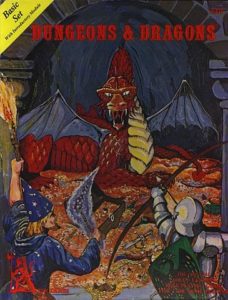 in the history of D&D: B1: In Search of the Unknown and B2: The Keep on the Borderlands. These adventures were the first experience for millions of D&D players because of their inclusion in the 1977 and 1981 Dungeon and Dragons Basic Set boxed sets. Gamers mentioning Zilligar the Unknown or the Caves of Chaos in the right company are likely to get their fill of tales talking about low-level characters dying awful deaths or unexpected magic items somehow saving the day.

The Goodman Games releases will go above and beyond reprinting and updating these classic modules. The announcement at the show positioned them as collector’s editions of classic films released on Blu-Ray. The books will feature digitally restored scans of each module, including the multiple versions of The Keep on the Borderlands that appeared in different printings. Original In Search of the Unknown author Mike Carr contributes and interview, plus commentary from other contributors to the game.

The first hardcover collection in this series combining these classic adventures is slated for a Gen Con exclusive release in August with a general September release to follow.

What is your favorite classic D&D dungeon? Let us know in the comments.