You'll Save The World With Strategic Bluffing In 'Guardian's Call' - Nerdist

Bluffing games tend to be pretty polarizing.  They’re not just about luck or mechanical strategy. They include a variable element that no game designer completely accounts for: the personalities of the people around the table, and their knowledge of each other. Sometimes that means the games can get boring, or worse still, socially complicating. Thankfully, there’s a game that offers a more refined take on the bluffing mechanic, while also avoiding those awkward social situations.

Guardian’s Call, currently on Kickstarter, offers a layered experience to that simple bluffing mechanic, adding in transparent and competing motivations (in the form of character roles), and a complex (but not complicated) scoring system. At the heart of the game is the offer phase, where players offer sets of cards to their players, telling them, but not showing them, the nature of the items of the offer. Outcomes are determined by whether or not players accept or reject the offer at its face value. It is the means by which cards, representing resources can be gained by being offered (by accepting honest offers or rejecting deceitful ones), or by making offers (having your opponents reject honest offers or accept deceitful ones). Curses throw a snag into the mix: they must be bluffed when offered, and they add negative effects to the player who gains them. It increases the stakes of the bluffing phase significantly. 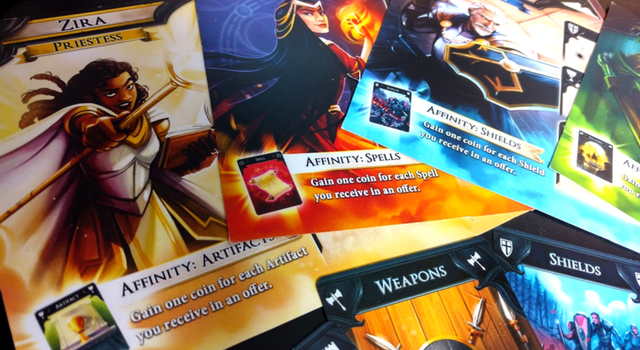 There’s also a currency structure that allows players to gain cards and grow their resource in addition to the offer stage, as well as remove curses (and gain points). Players earn coins by making offers and gaining cards that match their affinity (which is known to all players and adds a level of motivation), as well as being duped by their opponents. Playing to your own motivations as well those of your opponents’ opens up an entire layer of strategy that elevates this game above lighter bluffing game fare. There are other additional mechanics that add more strategic opportunities into the game, including open quests that allow players to collect additional victory points (essentially making players compete to fulfill them) which any and all players can score if they fulfill the requirements. The mix of quests also adds a layer of replayability. 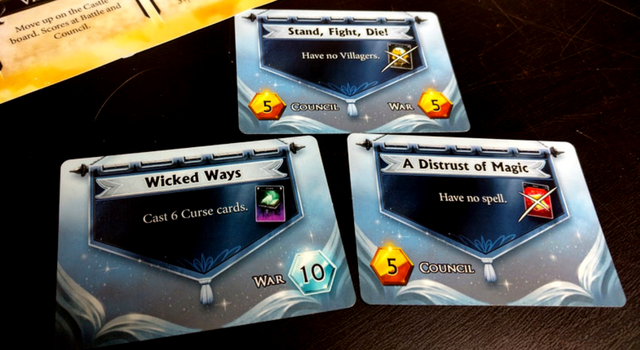 Different resources score differently at various points in the game, meaning that as a savvy gamer, you’ll adjust your own strategy for which cards you’ll want to collect in response to the cards your opponents are gaining. For example, only the 2 players with the most Weapons cards will score any points for amassing weapons as a resource, whereas Shield cards are scored based on the number a player has.

This shifting dynamic harkens to games with card-draft and reveal structures, and mixed with the bluffing mechanics, the adjustment of one’s own strategy (as well as the responsiveness of your opponents) is a sophisticated dance on the table.  The end is randomly determined by the revelation of the War card, in which players then account their resources they’ve gained in preparation for battle. Because you never know when the end is, there’s a tension that remains throughout the play experience. You hope to see the War card to end the game when you’re in an advantageous position and avoid it when you need to turn things around. 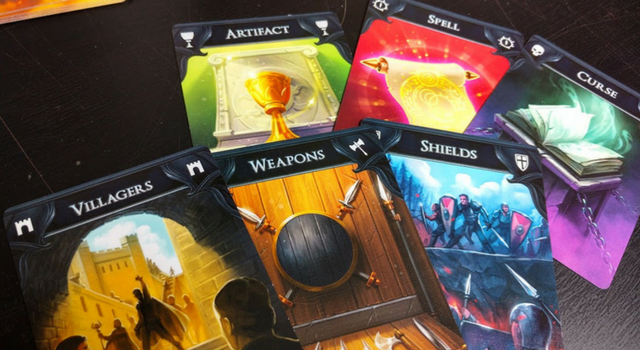 Beyond the game experience, Guardian’s Call offers a worldview that facilitates competitive gaming while also letting each player be the hero of their story, adding a layer of family friendliness to a game style often combined with more sinister themes. Because each player takes on a character, each of whom is trying to save the world and is thus magnanimously motivated, there’s a distance from personal social dynamics around the table.  The competition is to be the best Guardian of the realm. It’s both epic and also low-stakes from a social relationship standpoint.

This game has all the elements to appeal to both family gamers, with its straightforward mechanics and accessible theme, as well as hardcore competitive gamers, with the layers of strategic opportunity continually revealing themselves. With bluffing games, the level of sophistication is as much determined by the players around the table as it is in the mechanics themselves, and as such, Guardian’s Call can appeal to a wide variety of player levels.

You can learn more about Guardian’s Call on their Kickstarter and back the project to secure yourself a copy – but you’ll have to hurry as the Kickstarter ends on October 13th.