Build A New World in Yamatai This March - Nerdist

Build A New World in Yamatai This March

We’ve been ever so envious of those who were lucky enough to attend BGG Con in Texas last Fall. They got some precious hands-on time with this game. Very soon, though, Bruno Cathala’s latest creation will be available for all. The designer has made Days of Wonder fulfill the promise of its name from a different angle, once more, returning to an era where myth entwines with history.

The lost kingdom of Yamatai is both a point of fascination and a bone of contention among historians. The country would have existed in the Iron Age, when Japan was still known as “Wa” and its culture mixed much more fluidly with China and Korea’s. Most memorably, of course, it was said to have been ruled by the mysterious shaman queen, Himiko. 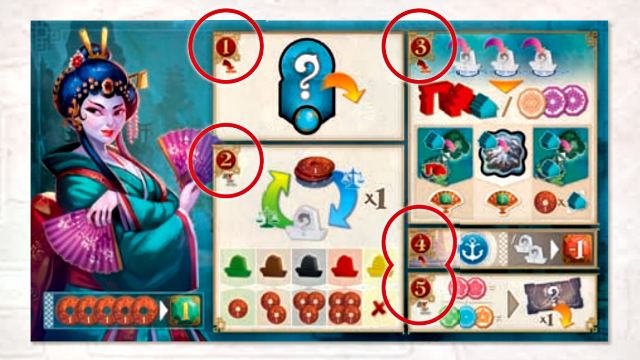 In this game, two-to-four players assume the roles of master builders vying for Himiko’s approval. The queen has issued an open request: build a city impressive enough to be her wondrous kingdom’s capital. Those rising to this challenge must manage chests full of coins and shipments of precious resources–gold, wood, bamboo, clay, and stone–as they try to assemble an assortment of palaces and torii (“standard buildings” and “prestige buildings”) which will please the shaman queen.

Ships factor into all aspects of the game. Players manage shipments, as mentioned, then command fleets, and the board encompasses an archipelago where they can sail from island to island, remaking each spot into something grander. Not surprisingly, it does carry a bit over from Cathala’s last creation, Five Tribes, too. While players do compete about the order of turns in each round, much is actually shared on the board. Ship trails are made as a group, and the ships themselves can be swapped, opening up plenty of delicious opportunities for crafty backstabbing. 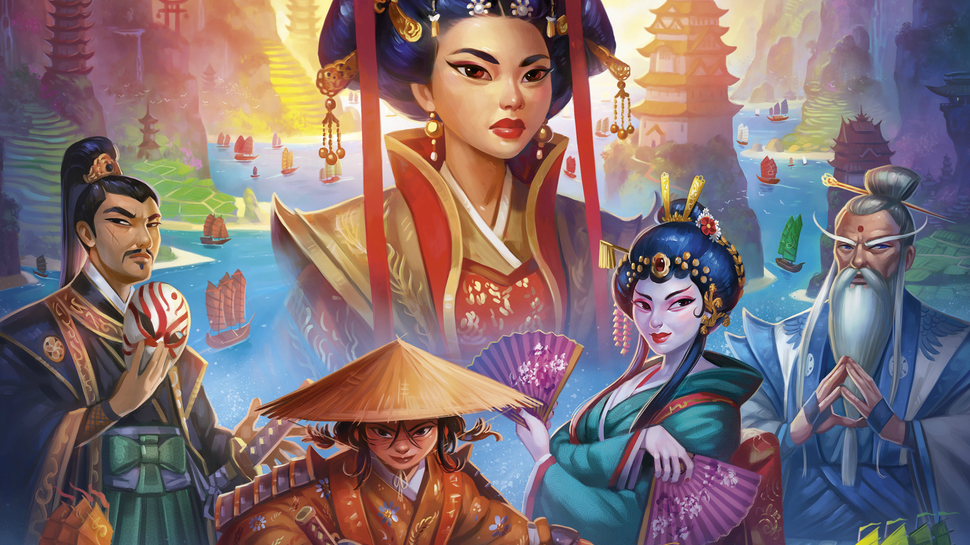 Of course, describing a game with mere words can never fully convey the fun of actually playing it, so Days of Wonder have put together a quick video showing how Yamatai works on the table top. With “For Queen Himiko’s Smile” as a sub-title, it really stresses the whimsical sense of enchantment and grandeur that Cathala and his co-designer, Marc Paquien, are striving for in the game.

The preview also puts plenty of focus on the lush, painterly illustrations which artist Jérémie Fleury has contributed to the overall ensemble. Look closely, in particular, at the stats cards he’s drawn of the “powerful specialists” whom players can call upon during the game. You may recognize the sun goddess Amaterasu along with other big names from the Shinto pantheon like the fishermen god Ebisu and the venerated couple, Izanagi and Izanami. With a true depth of research behind it, Yamatai‘s blend of myth and history extends even into the mythologies of the era.

The game comes to Europe in March, then America in May, so expect many rivalries to be stoked and friendships ruined this Spring. Of course, if the wait is still too frustrating to endure, Days of Wonder has made Yamatai‘s rule book available, so you can learn all that’s left to know about the game well ahead of its release.

Will you be making a sojourn to ancient Wa? What other games are you looking forward to this year? Share all your thoughts in the talkback.