Rogue may have the ability to suck a superhero’s powers dry, but in three-dimensional form, she also has the power to suck all our attention towards the great work the artists at Sideshow Collectibles have done. Here’s your exclusive first look at their brand new maquette of Anna Marie in action. 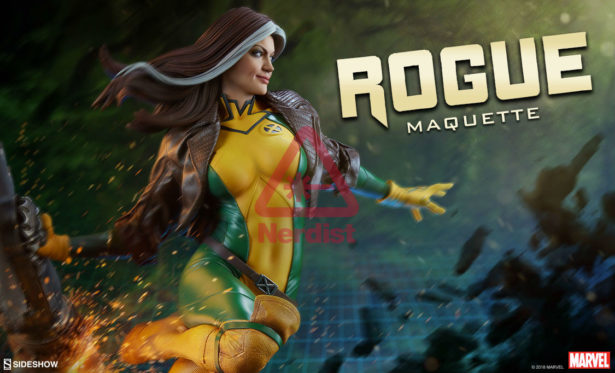 Like many of Sideshow’s recent Premium Format figures, she has also inspired a fine art print by Ian MacDonald, based on the pose the collectible figure is in. This also gives you a sense of what the figure might look like from another angle, and reveals she’s battling some kind of robotic buzz-saw arm. In a behind-the-scenes video that focuses on the first two X-Men characters in this premium line–Wolverine and Magneto, because of course–Sideshow’s designers reveal that they’re particularly inspired by ’90s comic and cartoon designs, which became iconic in pop-culture. But what they also make clear is that literal adaptations of drawings into large 3-D pieces leaves a lot of room for added detail, which they provide in spades (and capes).

Rogue’s jacket will be tailored fabric. You’ll see in the video the degree to which tailoring played a part in Magneto’s cape.

And how about that shadow at the end? Looks like they’re teasing a whole lot of “coming next.”

Are you excited, sugah? Let us know in comments.