Wrap Up Your Gaming Experience With These RPG Aftercare Tips - Nerdist

Wrap Up Your Gaming Experience With These RPG Aftercare Tips

GM Tips is our series to help Storytellers and Game Masters improve their craft and create memorable roleplaying experiences. Last week we talked about the delicate art of shopkeeper craft, and this week we talk about tips for a better post game experience

Diving head first into a character role for an extended period can leave a mark upon our fragile minds. One day we are a mild-mannered zombie employee and the next we are slaying (or chatting up) vital NPC’s for the sake of our alter-ego’s character development. When it the experience comes to an abrupt end there can be an almost fiendish desire to return to the role—or carry those emotions into the real world.

The discussion of bleed (carrying emotions from the game to real-life) from a players perspective has been covered in some amazing articles before. I find there is a shortage of discussion regarding storyteller aftercare. Game masters spend days in preparation for the games and are also burdened with the aftercare and wrap up. In the worst cases, storytellers deal with player emotions and negative fallout from factors such as a plot gone astray or player-vs-player. When games are off-the-hook amazing, that exciting energy can sometimes send us storytellers blitzing off into la-la-land and neglect our own real life obligations. With these thoughts in mind, here are some storyteller focused tips on post-game aftercare.

This often repeated rule is used in many creative industries from writing, editing, to art—take a break. While it can be tempting to pull up your notepad and start crafting the most important parts of your campaign right after your game; we should resist this urge. A cool-down period helps settle the results of the event while giving us the added benefit of additional time for inspiration. If you’re worried about forgetting critical elements of your game or specific details ask yourself this question: If you can’t remember them in a day, are they truly critical?

Twenty-four hours also allows the storyteller to separate themselves from their players. A true post-game sabbatical would include a “no talking about the game in any capacity” clause. Hang out as friends first, players second. A storyteller may have to put up a strict boundary here as many players will ask a question under the guise of “real quick question” that sparks a two hour conversation. These innocent conversations can spiral negatively in the chronicle. For starters, only players who have this access to the GM are granted this privilege, which can lead to resentment among other players. Additionally, if here was some player driven drama afoot, the emotional drain on the storyteller can prevent them from making clear and concise calls needed. So do yourself, and your game a favor—take 24 hours.

Take An Active Role Against Bleed 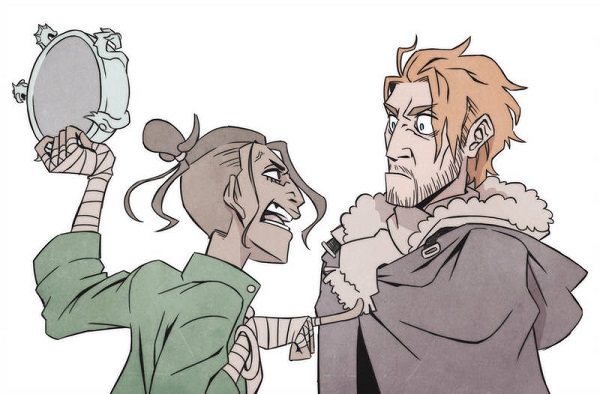 Storytellers have the bird view of the game and should be able to spot the mood of their players on a fly. While we aren’t mind readers, if a character death happened, or a massive in-game argument took place; chances are your players will need some decompression. This would be a fantastic chance to invite your players into your 24-hour game-free bubble and drink as friends. If that’s not possible, when your own sabbatical is finished, reach out to players of your game for feedback and issues on a one-on-one basis.

In tabletop, this allows you to explore new house rules as your players offer up brilliant suggestions. If one character is feeling particularly useless or underpowered, it’s a great chance to get that feedback so you can work uplifting content into future sessions. Hearing feedback that your players think the Druid class is useless and they regret having chosen that, gives you a chance to add survivalism or even alter the class entirely to suit your chronicle. In LARPs, you might find the need for additional staff members to on-board new players or have serious conversations on player related problems. Since the players are the most important part of your game, touching base with them should take the most immediate priority after your game break.

We’ve taken care of yourselves and we’ve touched base with our players; everyone is on the same page and feeling great so it’s time to write and plan ahead correct? Maybe. One bit of RPG aftercare that has helped elevate games is the act of hunting for artwork. Pick a night, toss on some music related to your game and start finding pictures of NPC’s, locations, villages, upcoming monsters and the like. There are many wonderful artists and sources to locate image and you may even discover new and favorite RPG artists.

Artwork helps set a mood for both players and storytellers and while writing content can be productive—a picture does indeed say a thousand words. Instead of just mentioning a Hill Giant and relying upon everyone to recall the picture from the Monsters Manual, a cool custom piece of art might add more gravitas to the encounter. Rather than RPG prep work, I place the hunt for artwork as game aftercare for us storytellers because we often work better once the player direction for the game has been decided. Since there is no global storyteller who runs for us, turning to artwork helps storytellers reconnect with their world and get joy from it. Art is meant to inspire, so let it do its job.

What kind of RPG Aftercare do you perform as a GM? Let us know in the comments below!

Featured Image by: In A Tavern They Met by Hugo Cardenas. Art and animations at: Takayuuki.deviantart.com and Youtube