Recently Le Creuset’s new line of Star Wars cookware let fans bring the galaxy far, far away into their own kitchen. Now Williams Sonoma wants to help you hit hyperdrive on making your meals. The home furnishing and kitchenware store has announced their own collection inspired by our favorite space opera. Soon you’ll be able to whip up your dinner in a flash with officially-licensed Star Wars Instant Pots. They celebrate some our favorite villains and droids, along with one beloved wookiee.

Each of the “high-performance all-in-one machines” come with seven cooking functions and 14 smart programs that can “expertly handle everything from pressure cooking, sautéing and slow-cooking to making yogurt.” They also feature an advanced microprocessor Williams Sonoma says “speeds up cooking duration by two to six times, while using 70% less energy than average.” That might not be enough to power Starkiller Base, but it still sounds pretty good.

The smallest pot in the set is the BB-8 decorated Duo Mini three quart machine ($79.95). It also doubles as the cutest piece in the collection, as is always the case when BB-8 is involved. 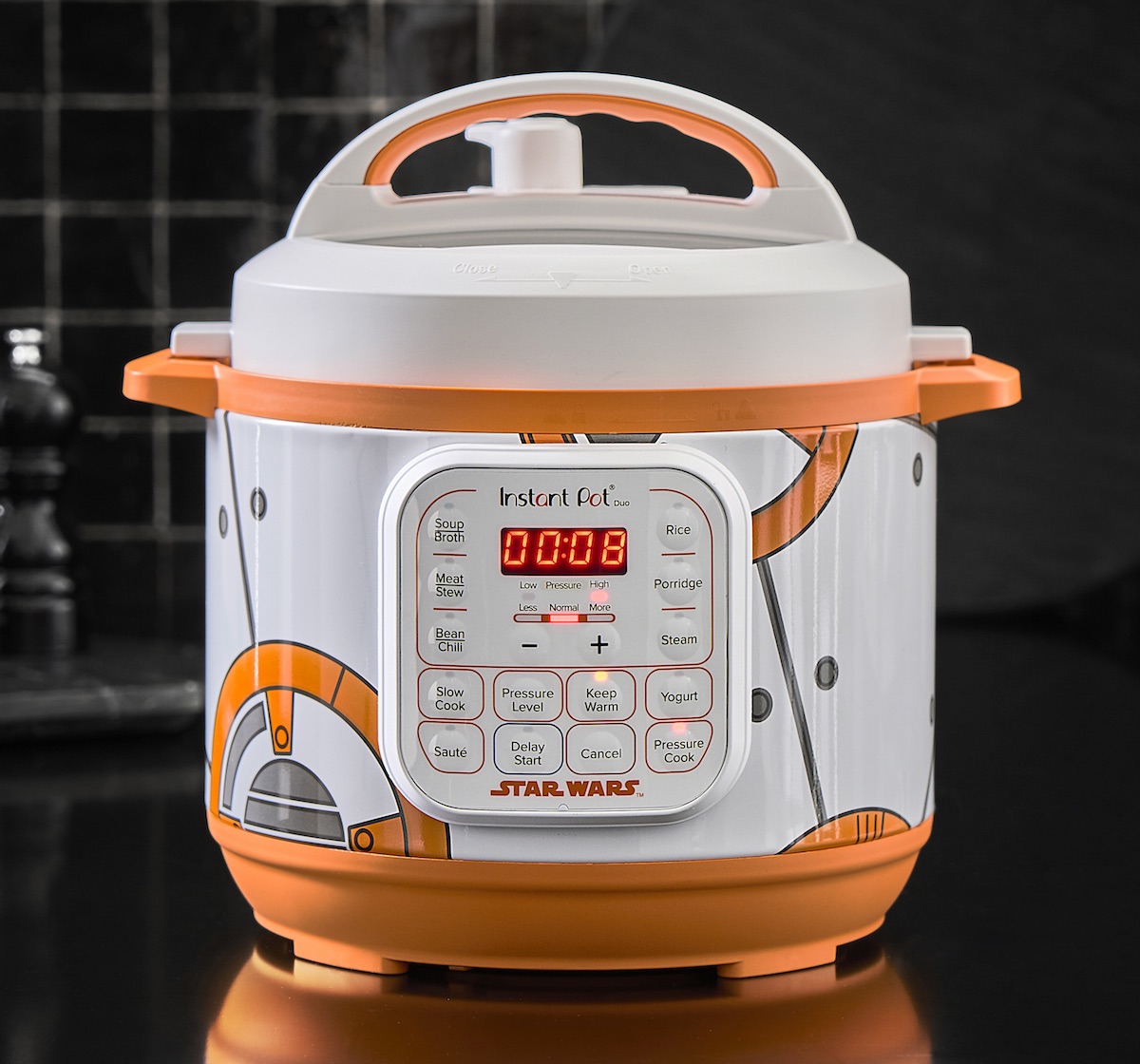 Three of the Instant Pots are Williams Sonoma’s Pot Duo six quart machine ($99.95). That includes the black Darth Vader model, which comes adorned with his visage on the side and the Death Star on the back. 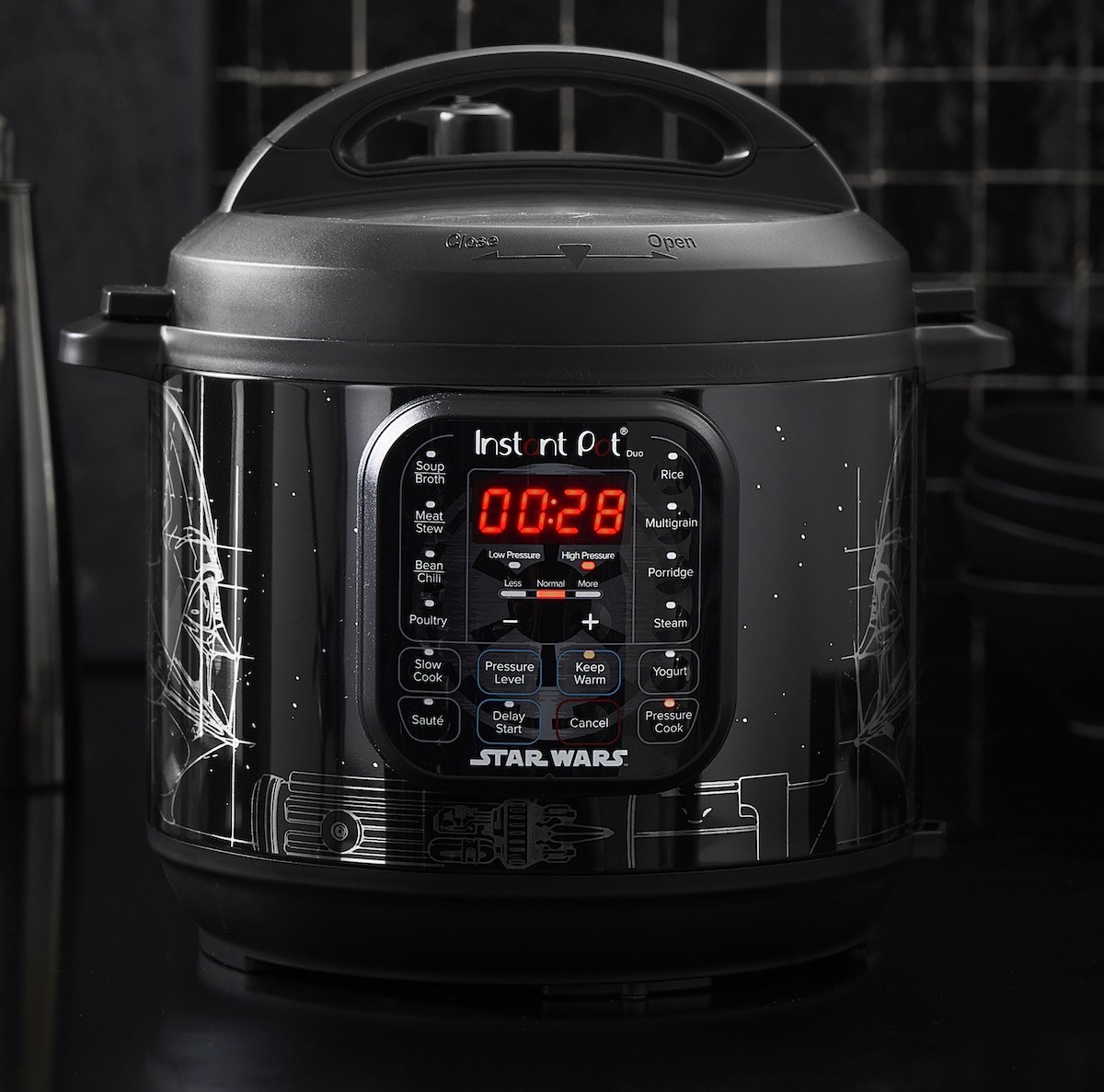 The six-quart white stromtrooper pot also features blueprints for both the iconic helmet of the group a rendering of the Death Star on the back. (This might also be the most elegant looking instant pot in the set. And yes, we say that even though it includes the Empire’s logo.) 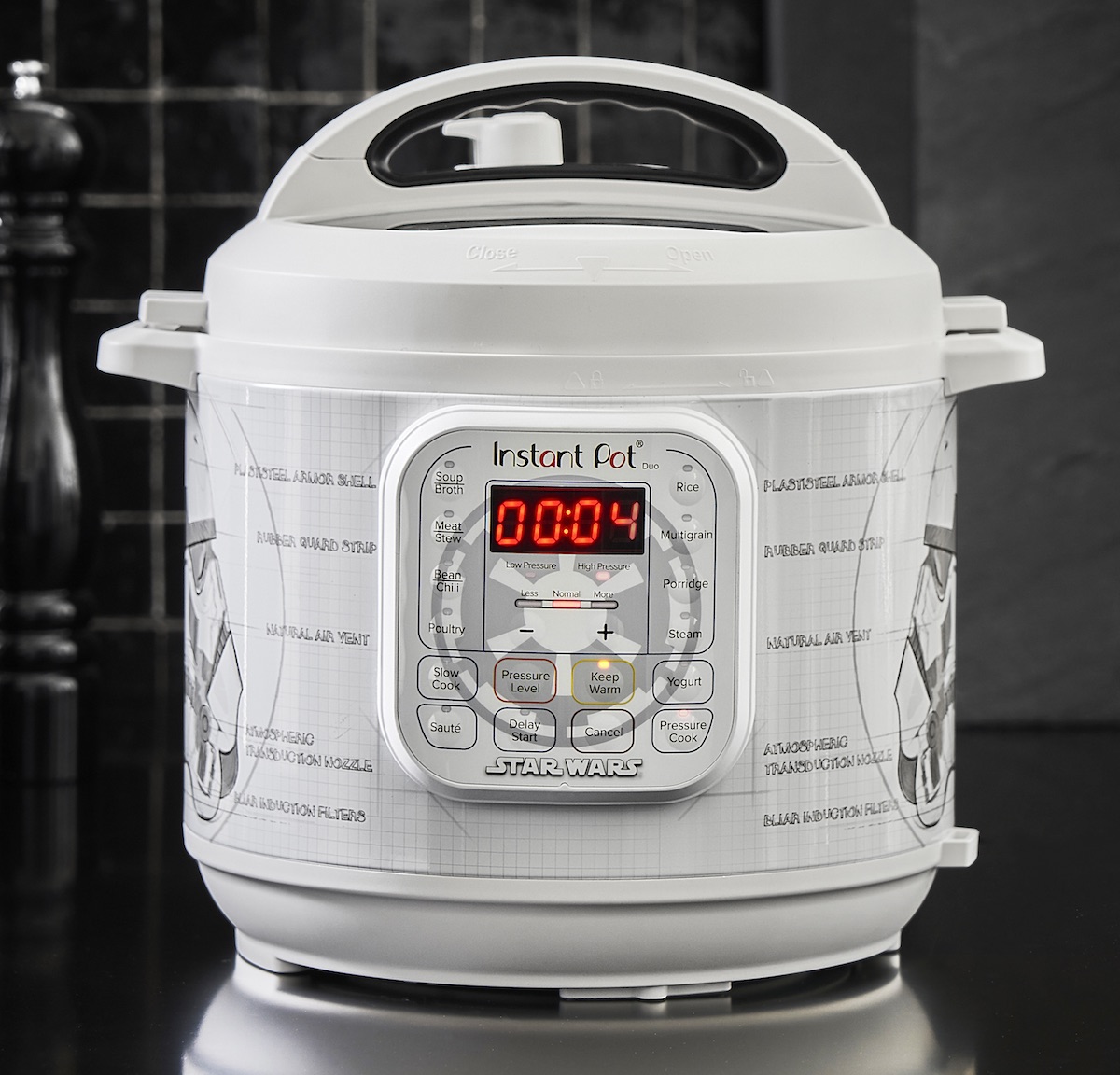 The last of the three six quart pots pays tribute to Luke Skywalker’s loyal droid, R2-D2. This is also the Instant Pot that most looks like it might come to life and start beeping at you. 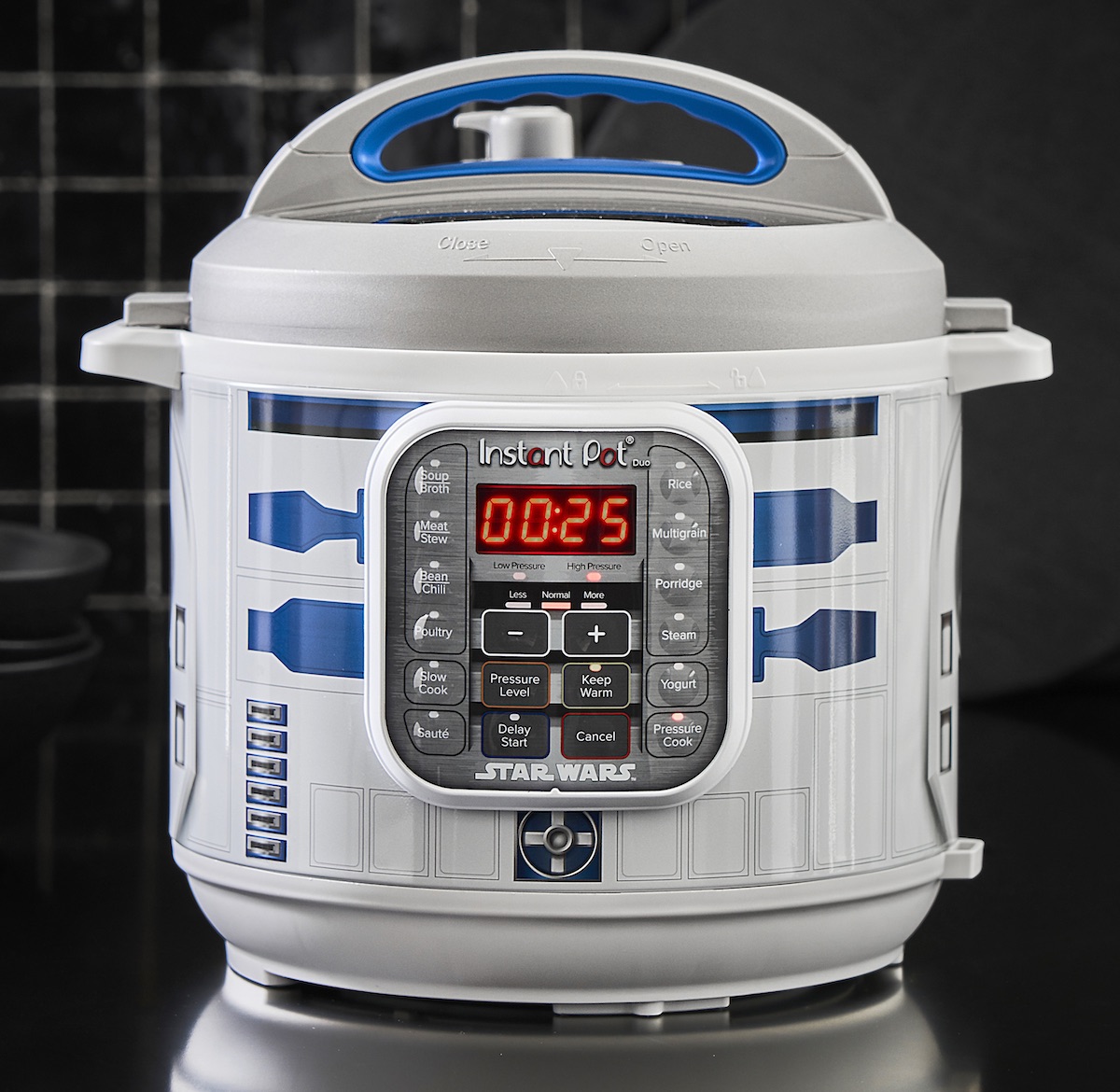 (Are we sure that R2-D2 instant pot isn’t actually a functioning droid? Good luck forgetting that when you go to your fridge at three in the morning in half a daze.)

The largest piece in the collection takes its inspiration from one of Star Wars biggest (both literally and figuratively) characters. This brown Pot Duo eight quart machine ($119.95) is a fitting homage to the larger-than-life Chewbacca. In addition to matching his shaggy brown hair, it also features his bandolier on the side. 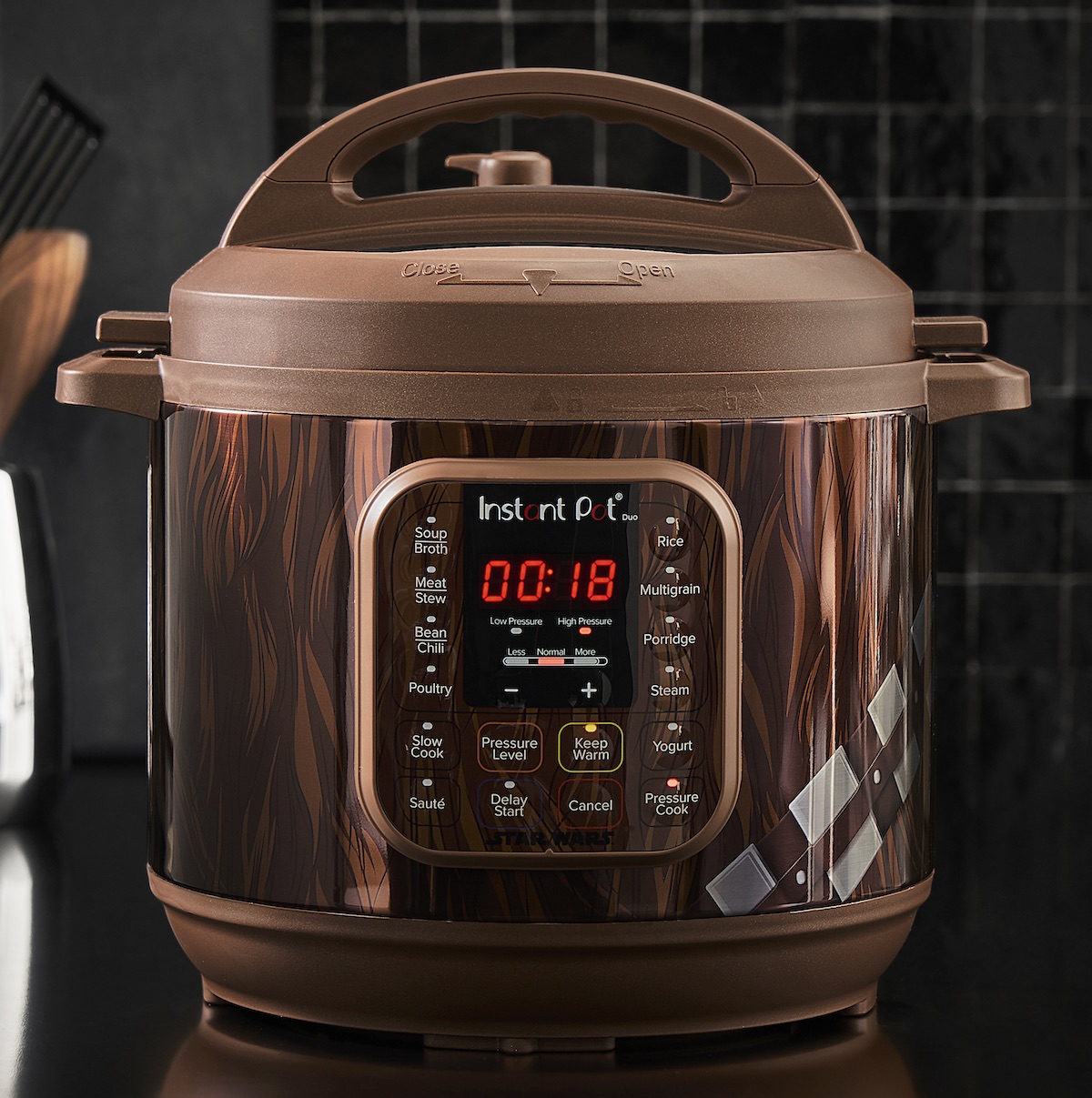 Each of the five Instant Pots also comes with Star Wars-inspired (kinda) recipes. They include:

You think Chewie’s Chili calls for porg meat or…..? What? Too soon? Well, it’s not like he ate them. He just murdered a few in front of their porg families and cooked them. If he had used an Instant Pot to make those porgs though the rest might not have had enough time to guilt shame him into not eating them.