Why We're Excited For Paranoia's All New, All Traitorous Edition - Nerdist

Why We’re Excited For Paranoia’s All New, All Traitorous Edition

Since the earliest days of Dungeons & Dragons, unspoken rules have evolved to shape the play experience. Dungeon Masters should be tough, but fair. Encounters should be challenging but surmountable. Players should try to work together with minimal intrigue and drama to keep the story flowing. Everyone should know and follow these rules. It was only a matter of time before a game came along to upend these ideas.

That game’s name was Paranoia.

Paranoia takes its inspiration from dystopian fiction like 1984, Logan’s Run or Brazil. The game is set inside Alpha Complex, a futuristic enclave run by an all-knowing Computer. The players take on the roles of Troubleshooters trusted by Friend Computer to root out threats to the safety and security of Alpha Complex. These traitors include Commies, terrorists, mutants and members of secret societies. To throw characters right into the dangerous mix of intrigue and violence, one of the great secrets of Alpha Complex is revealed during character creation; everyone in Alpha Complex is a mutant, everyone in Alpha Comples is part of a secret society, and therefore, everyone is Alpha Complex is a traitor. That puts all the players at odds with each other trying to reveal other people’s secrets while protecting their own.

Upon its release in 1984, Paranoia was a breath of fresh air compared to the dozens of class-and-level offshoots D&D‘s popularity spawned in the early 80’s. Characters have multiple clones to absorb the backstabbing and deadly missions Troubleshooters partake. The GM is encouraged to be capricious and unfair by using Friend Computer to ask uncomfortable questions and catch players in unwinnable situations. High tech devices are dangerous and unreliable. Even a mission as simple as repainting a hallway to match its color-coded security clearance will turn into a bloodbath. 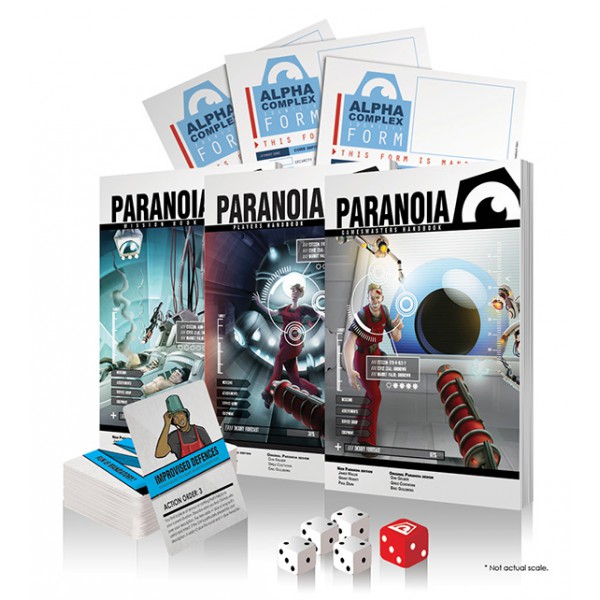 The game has gone through several editions since its premiere over 30 years ago. The first edition featured several classic adventures such as Me and My Shadow Mark IV where the very tiny and very squishy clones are assigned to a giant robotic tank that makes an AT-AT look like a scooter. The second edition incorporated a metaplot involving the death and rebirth of Friend Computer and several missions that were parodies of popular RPGs at the time. A third edition, calling itself Fifth Edition for laughs, pushed gameplay in a cartoonishly violent direction.

Mongoose Publishing brought the game back in 2004 and created content for the different styles of play that had evolved from the different editions of the game. Zap style adventures echoed the Wile E. Coyote antics of the third edition. Classic style tried to balance coherent stories with Adult Swim absurdity, like assigning the players to guard an invisible stealth train that might not actually be there, but anyone pointing that out would be branded a traitor. The company also supported Straight play as a throwback to the original edition where the humor was toned down to be darker and more subtle and the horrors of Alpha Complex were turned up. The company launched a Kickstarter in 2014 to launch a new edition of the game and the fruits of that Kickstarter are now available for pre-order.

The new edition comes in a boxed set featuring rules that mix dice and cards together. Skill rolls are made with a pool of six-sided dice where successes are counted as 5s and 6s rolled. Every roll also adds the Computer Dice, which has the 6 on it replaced with the icon of Friend Computer. The Computer takes note of a player’s actions whenever the icon comes up, which usually means some embarrassing explanation is forthcoming from the player. The cards contribute to a small, Coup-like mini game played for combat rounds. Cards determine in what order the players act, but they are played face down. Players can claim any initiative they want, but if they are caught bluffing, they lose their card. If the card played is correct, the accuser loses one of their cards instead.

The new edition is expected later this year. Until then, remember the most important rules of Troubleshooting: Stay Alert! Trust No One! Keep Your Laser Handy!

What is your favorite humorous game? Let us know in the comments.