Why Batman’s Anarky is More Relevant Than Ever - Nerdist

Why Batman’s Anarky is More Relevant Than Ever

If you hadn’t noticed, America is kind of a mess right now. With a looming presidential election, domestic and international threats of terrorism, police brutality, and constant political corruption, there’s a lot to think about. In times like these, getting lost in a comic book looks mighty tempting. However, instead of a superhero solving all our problems, what if we turned to look at an anti-villain, someone who blurs the lines between good and bad, someone like Batman’s Anarky.

For those unfamiliar with Anarky, he first showed up in a 1989 issue of Detective Comics. Created by Alan Grant, Anarky was the expression of Grant’s political and philosophical ideologies at the time.

Originally, Anarky’s focus was his namesake, anarchism: exposing political corruption, fighting for social justice, and advocating for an anti-civilization where the oppressed could be free. In theory, he was much like Batman, although he chose to take the law into his own hands because he didn’t believe in government. As such, he was labeled an anti-villain for his noble causes, but questionable methods.

When Grant became involved in the Neo-Tech philosophy (much like Ayn Rand’s objectivism) in the 1990’s, so too did Anarky. While anarchism and neo-tech share a similar anti-authoritarian attitude, Anarky’s focus shifted to rationalism, free market tactics, and achieving full-brain consciousness rather than rallying the common man. In both cases, however, Anarky proved an extremist, whose motives fell into a gray area of morality.

So how does such a divisive character fit into the world as we currently know it? 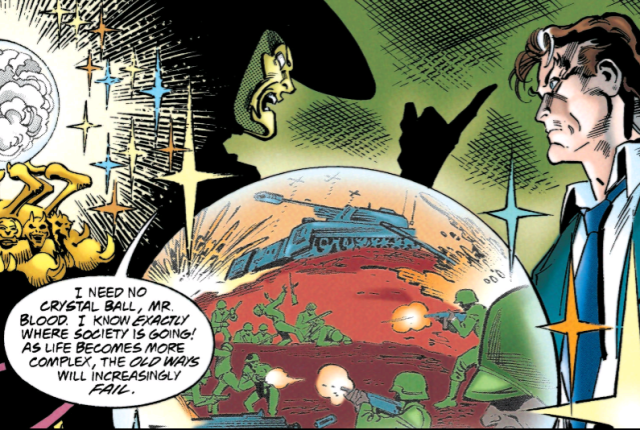 First, let’s go back to who he stands for and against. Anarky is all about the common man, the 99%. Even during his first appearance in Detective Comics #608-609, Anarky protests the building of a commercial bank on a vacant lot, which is currently being utilized by the homeless. He consistently challenges the greedy elite in favor of helping the poor and homeless, even befriending one man in particular, Legs, a Vietnam vet who acts as his spy on the streets.

Because of his neo-tech philosophies in later stories, he also seeks to bring justice to the world for all those who died in the name of something other than themselves. In Anarky #1 (1997), he kneels at the foot of the Washington Monument musing, “To all the innocent dead, I say this–you died for ideals. For politics. For religion. Because somebody told you that your country means more than you do–that ideas matter more than life.”

In short, Anarky shows that even one person can make a difference when they stand up to authority, and question what they’re being told. He tries to be the voice of the people by inspiring others to take their individual power back and reject complacency. While he often takes things too far, like poisoning a chemical plant owner with his own toxic waste, he ultimately believes his actions are for the greater good.

Comic books, like other forms of media, are a kind of escapism. With the amount of social frustration and discontent seen in movements like Occupy Wall Street and Black Lives Matter, people need to have a safe outlet of catharsis. Anarky stands for those who question the status quo and say “enough is enough.”

Secondly, aside from his obvious association with social causes, Anarky’s relationship with information makes him a relevant figure in comics today. In Detective Comics #618-621, Anarky shows how hacking can be utilized for social justice. Using his Moneyspider pseudonym, Anarky acts as a modern-day Robin Hood, stealing money from corporate accounts and transferring them to third world countries.

While modern day hacking groups like Anonymous aren’t necessarily redistributing wealth, they are aligned with anarchism and spread information using the Internet and social media. They, along with people like Edward Snowden and WikiLeaks founder, Julian Assange, expose corruption, government surveillance, and violent radicals with their vigilante style activism. Although Anarky had less to do with his namesake in later comic stories, he’d likely align himself with these people today, since they denounce the irrationality of lies largely found in the political and religious sectors.

Although his peak was in the late 1990’s, Anarky continues to be an impressive DC character who proved that comics could be both entertaining and inspire philosophical conversation. As our country becomes more and more divided, fueled by the media and politicians, we may start to see an increase in well-intentioned extremists, like Anarky, show up in both pop culture and real life.

Do you agree that Anarky is still a relevant character for the DC Universe in his original incarnation? Leave us a comment below!

Feast Your Eyes on this Awe-Inspiring Zelda Quilt

The Scott Pilgrim-age Guide to Toronto