Warning: Plot spoilers ahead for Peter Dinklage’s Avengers character. Do not read on if you don’t want to know.

Go ahead; say it. We were wrong. Our sources were legit, but Peter Dinklage is not Corvus Glaive. Marvel Studios managed to fool us with their smokescreen, and it was a genuine surprise to see Dinklage, and hear his familiar Game of Thrones English-ish accent as Eitri, the giant king of the Dwarves. Now here’s what you may not know: movie Thor has encountered Eitri before, and been to Nidavellir, the home world of the Dwarves. However, this all happened in the various official movie prelude comics, which, as we know, are only canon until movies contradict them.

But let’s back up a bit. Nidavellir is one of the Nine Realms, on a similar level of Yggdrasil as Midgard, a.k.a. Earth. It is not a big techno-planet with robotic rings around it in the comics; rather, it has a medieval level of technology and is known for its more old-fashioned but powerful forges. Here we see it under attack by trolls in The Dark World‘s 2-part prelude comic. (Amusingly, in the same story, Iron Man makes Game of Thrones jokes to Thor–“It’s like you, but instead of a magic hammer, they have dragons and sex”–which suggests the actual Peter Dinklage exists somewhere in that reality.) And here we see Nidavellir as a more Asgard-like floating city in the official The Dark World video game:

The prelude comic to The Avengers, meanwhile, also features Thor rescuing the dwarves of Nidavellir, and unlike Eitri in the movie, they are not gigantic relative to humans and Asgardians. Dinklage’s onscreen look almost resembles the trolls more. 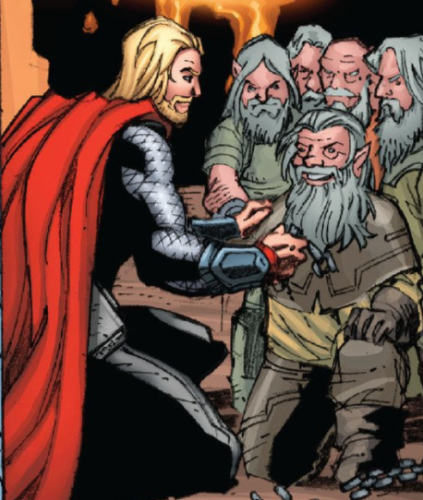 Eitri and Nidavellir serve the same story purpose in the Marvel cinematic universe: it’s where many of Asgard’s mystical weapons are forged, including Thor’s classic Mjolnir and the brand spanking new Stormbreaker. Wakanda has vibranium; Nidavellir is the exclusive home of Uru, a highly durable metal that gains extra power thanks to its exceptional ability to absorb magic. Eitri was one of three dwarves who forged Mjolnir from Uru over the course of seventeen weeks (seen in Thor Vol 2 #80, the first in a miniseries entitled “Ragnarok”), in a process that caused a star to explode, which might possibly have been responsible for the extinction of the dinosaurs. In comics, Eitri has also made an Uru suit for Tony Stark. If Iron Man makes it out of the next movie alive, it’s totally possible this could happen next.

Eitri does appear in the Dark World game, and you can see that his planetscape looks very different.

Thanks to Thanos, Eitri is the only dwarf left, which is a dick movie even for the big purple guy, who usually only kills half the population. Combine that with the fact that most of the remaining Asgardians have been blown up, and Thor‘s future as a cinematic franchise looks either really dim or wide open for possibilities that don’t include any of his usual associated characters.

And to whoever leaked the rumor last year that Eitri would be the creator of the Infinity Gauntletin the Cinematic Universe, and that Peter Dinklage would play him…congratulations. That’s a pretty significant change, but one that makes total sense given the gauntlet’s power.

What do you think the future of the Marvel movies holds for Eitri? Let us hear it in comments, where we forge and we know things.