Which "One Night" Game Is Right For Your Group? - Nerdist

Which “One Night” Game Is Right For Your Group?

The Kickstarter has been fulfilled and the latest game in the “One Night” series is reaching the hands of eager gamers everywhere. One Night Ultimate Alien marks the fourth in the series that previously consisted of Werewolf, Daybreak, and Vampire. All of them can be mixed and matched in various ways, but each is also a standalone experience.

More than that, though, each seems to cater to a somewhat different play style. Everything from shrewd and subtle maneuvering to wacky chaos can be found somewhere in the series.  Here’s how they shake out and which might be right for your group. 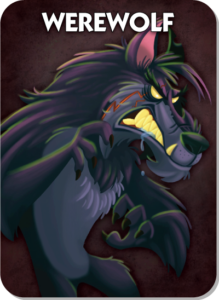 The first set takes the classic idea of village vs. wolves and puts the now signature “one night” twist on it. The main innovation of this game is not that there is a village hunting werewolves. It’s that you don’t necessarily know what role you have. Everyone gets a role at the start, but during the single night phase, several of those roles wake up and do things. And some of those things even include switching the player identities around.

So when you wake up, you have a double deduction challenge. You have to first figure out who you are (and therefore what team) and only then try to decide who should be killed so that you get a win. It’s not uncommon for werewolves and villagers to trade sides and everyone has to be careful not to give too much information out too quickly. Telling the complete truth might be helpful for the village, but you can’t be too sure you’re still on the village team when its time to play.

Werewolf is the best version of the game for those looking to take the classic hidden role game and tuck it into a far briefer package without player elimination.  If you enjoy the lies and uncertainty, as well as strange gambits from players who think they may have been swapped, then this is the one to try. 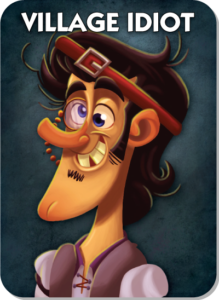 Daybreak continues the Werewolf theme and adds a ton of new roles. Unlike the original, now even the wolves get special powers. The Alpha Wolf can convert someone to the wolf team or the Mystic Wolf who can look at another player’s card.  This gives the wolves some serious strategy to consider as they try to avoid detection.

But many of the cards dramatically increase the chaos. There is also the paranormal investigator who can be turned into a wolf if he sees one, the Curator who can randomly assign a player a new role, or even the village idiot who can shift all cards one player left or right. With Daybreak, you can really maximize the uncertainty. You get an experience where calm and rational deduction is made far more difficult – so bluster and personality shine through all the more.

If you like to point fingers and make baseless accusations, then this is the One Night title for you. It allows you to enhance the boisterous party-like elements and then have a fun semi-surprise reveal at the end. 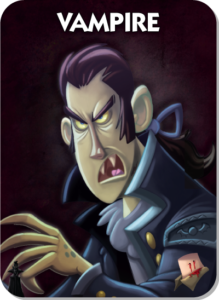 Vampire includes the new “Mark” system. Every player starts with a plain Mark but those can be changed during the night. For instance, a player might receive the bitten mark and join the vampire team (no matter what role card they have); someone might be targeted for assassination; or you might even have lovers who want to ensure that they both live no matter what.

The really interesting thing about Vampire is that you don’t have too many opportunities to switch roles. If you start as the Count, you’re very likely to end as him, too. Instead, what changes are your motivations. Maybe you start as the Pickpocket. So you want to kill a vampire. Then you are turned into a Lover and fall in love with a vampire. Suddenly, it becomes important which vampire is killed and you need to defend your paramour. In this way, your role usually stays the same, but your win condition is manipulated.

One Night Vampire gets to a deeper level. Your actual character card is far less important than the mark you end up with. Determining what marks are available, and why the players are acting the way they are, is critical. This is definitely the One Night title to try if you enjoy more subtle deduction or if your group is already well versed in the genre. 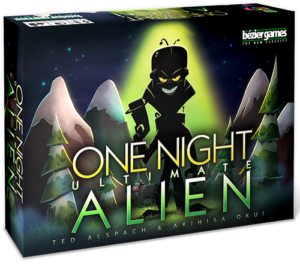 Alien builds from the Vampire mold. Like its predecessor, you see very little role switching – there’s only one character that can swap your actual card. But it avoids Vampire’s use of marks. Instead, what a player wants to do changes depending on who else is in the mix.

For example, there are two named aliens on the alien team – Groob and Zerb. If only one is in play, then they act like normal aliens trying to avoid getting killed. But if they are both in play, they win only if the other dies. Suddenly, you have a blood match between two players – and the unnamed aliens are stuck in the middle. And you have the Blob and the Mortician who win or lose based on whether adjacent players live or die.

This provides a fun and interesting challenge. Everyone seems to want a particular person dead (or to stay alive), but it isn’t always clear why. Only by drilling down on the possible motivations – along with some randomized encounters in the app – can you figure out who is who. Although Alien requires an app, it is otherwise a great title for any group that likes to read into the motivations of the players and work backwards from there to the identities at the table.

Which One Night games are your favorite?  Tell us about it in the comments.