Board games can draw inspiration from many different aspects of life. So it’s not especially surprising that video game ideas often find themselves in an analog format. But it’s undeniable that video games – able to process calculations much faster – are capable of higher order number crunching. So when you see a first person shooter or MOBA in board game form, it’s something to note. And here are three games that make the transition from console to table top exquisitely. 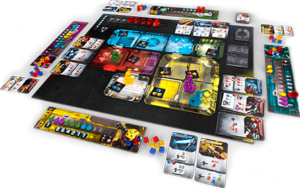 Adrenaline is the first person shooter of the board game world. It’s not the first to attempt this goal, but it’s certainly the best. In most FPS titles, you get a character who runs around the map collecting guns (or camping the body armor) and then tries to kill the other players. But can a genre defined by precision movement and fast reflexes translate to turn-based gaming?

In Adrenaline, each player gets a character who runs around the map picking up different weapons and ammo, and then uses them to kill the other characters. To make up for the lack of the fast-twitch experience, it adds instead a layer of strategy.

Instead of merely gunning players down, you want to add wounds in particular ways. In fact, you generally want to add the most wounds to a player in order to score the most points when they die. But you also get bonus points for the kill and for the first hit. Spreading out your damage appropriately is key to winning the game. Increasing the strategic considerations not only makes up for the loss of the realtime element, but it also creates a wholly innovative experience. Adrenaline effectively brings the FPS genre to the table in an interesting way. 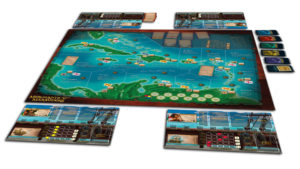 Compared to their digital counterparts, most board games seem very much on rails. You can only go around a certain track or move through the five predefined phases. But the idea of an “open world” where players can do anything is not unknown. In Merchants and Marauders, you sail around the Caribbean, follow up on rumors, raid ships, gain infamy, and generally do a ton of other stuff in this open-world title.

Merchants and Marauders is one of a select few truly open world games. You can sail all around the Caribbean going from port to port. You can buy and trade, sure, becoming a merchant. But you can also raid NPCs and players to become a marauder. You’ll get a bounty on your head and may even draw the attention of NPCs that hunt pirates.

The amazing thing is how well the open world concept works in a board game. You really do have the freedom to act however you want. I’ve seen players focus hardcore on piracy as they smash through merchants and board ships. Others are content to simply buy and sell as they corner various markets. Some players even focus on missions and rumors, gaining glory through adventure.

Merchants and Marauders is a fantastic game that weaves historicity with some healthy romanticism. And does so in a way that allows the players to go off in essentially whatever direction they want. It proves that the open world design can work outside of the console. 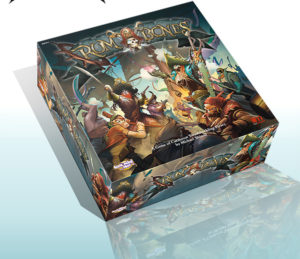 One thing that video games do rather well is simulate NPCs – especially those that can attack the players or take actions of their own. That’s why the MOBA (multiplayer online battle arena) made its home online. Video games are just more capable at having the “creeps” run around and do their thing with little involvement from the players. But this is yet another arena where digital ideas have gone cardboard.

In Rum and Bones, the MOBA experience goes analog. Set as two pirate ships attack one another, the game uses deckhands and bosuns as the creeps that more or less mindlessly rush forward using preset rules. The players, meanwhile, take control of powerful heroes. And the heroes are quite different. Some are ranged assassins, others are melee brawlers, and still others are more defensive. Working together as a team, they try to storm onto the other ship.

The most amazing thing about Rum and Bones is how well the concept works. Of necessity, the players need to move the creeps around and take care of a few things that the video game would do for you. But otherwise it delivers an exciting taste of MOBA on your tabletop – with friends in the same room – and without an internet connection.

What other board games are lifted from video game genres?  Tell us about it in the comments.

TAGGED: adrenaline, merchants and marauders, rum and bones, Board Games