A Player Asked For Healing. The Cleric Handed Them This. - Nerdist

A Player Asked For Healing. The Cleric Handed Them This.

You’re in the heat of battle. A dragon has your party trapped in its lair. Saving throws are failing left and right, everyone is injured, and things are looking dire. You barely dive out of the way as a breath of fire shoots at where you just were a moment ago. You’re not sure how much longer you can go on. If only you had a few more hit points.

The cleric is huddled behind a rock with you now. Thank Sarenrae! You beseech your friend to heal you so that you might defeat the beast next round. The cleric replies, “Certainly!” She hands you a scroll and adds, “I’ll just need you to fill this out first.”

You unroll the parchment and read it. “What in the nine hells is this?!”

I don’t know exactly what happened to Imgur user vanellopecruz’s encounter that required healing. but they were kind enough to share this image when their cleric whipped out a sense of humor instead of a restoration spell:

“My friend came into our weekly session with a new cleric. When I asked him to heal me, he handed me this” 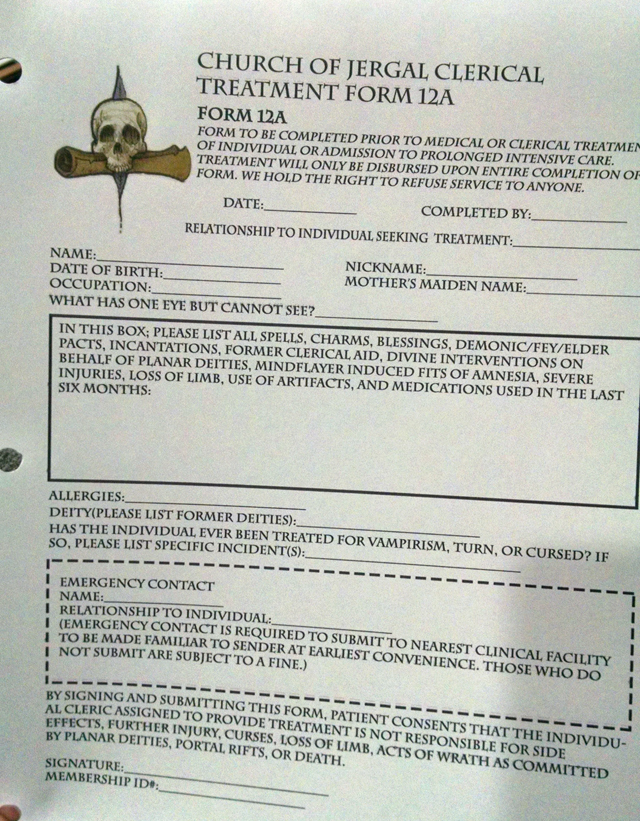