What The Heck Is Kingdom Death And Why It Matters - Nerdist

What The Heck Is Kingdom Death And Why It Matters

If you’re a Kickstarter gaming nerd, you’ve probably heard of Kingdom Death. If you haven’t, when you put Kingdom Death into Google now, you’ll likely hit their current Kickstarter for Kingdom Death: Monster 1.5 which reached its funding goal of $100K within minutes (or one of the many articles about the game by mainstream outlets like CNBC reporting on this funding feat).  As of this writing it is sitting at over $6M with over a month left before the Kickstarter closes, with projections for the game smashing records for funding and backers possibly waiting as long as until 2020 for their game due to the massive success of the funding drive. But what’s driving the game’s success? What makes it remarkable?

Kingdom Death Is a Cinderella Story 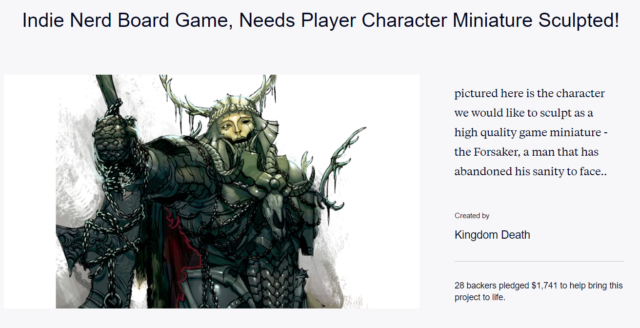 The game started out with a small idea by Adam Poots, who was inspired by the game Warhammer Quest and conceived of the universe and game in 2008 while awaiting jury duty. Poots worked on the mechanics drawing from his own backgrounds in app development, and pulling from the framework of his inspiration and improving the mechanics for both thematic play and character development.  His first Kickstarter was to raise funds to sculpt a specific miniature, had a funding goal of $1500 and finished funded with a total of about $1741 and 28 backers.  How far Poots and his small idea has come?

The Game Itself is Great (In Both Play & Scale)

With an average rating of 9.1 on BoardGameGeek and a weight rating (which describes a game’s complexity) of 4.1 . this isn’t some novelty card game for casual gaming, as this is a campaign game that can be played long-term with friends, with the game and universe unfolding over many, many sessions. Beasts of War did a (lengthy) Let’s Play of Lantern Year One which gives a good sense of the legs this game truly has (and not just the shapely, sculpted ones.) The Kickstarter is promising a 30 Lantern Year campaign, so this is a meaty affair.

This is also exemplified with the pledge levels, which start at $60 for the 1.5 updates only (and intended for people who already own the KD core game, likely having acquired it from the 2012 Kickstarter) to a pledge level of $1,666 for the single game and it’s plethora of expansions and bonuses, which roughly translates to a number of components so vast that collectively they could potentially trap small children and animals and pin down a grown man. (If you don’t believe me, check out this photo of just the core box next to a small child.)  It’s telling that they’re anticipating such large boxes for this game that they can’t deliver to PO boxes, and when they advertise the core box as “17lbs of gaming”. It’s so big they measure the game in units that are comparable to cases of fruit. Talk about hobby value.

If you had one or two friends who backed this game, even if you didn’t know about it when the original Kingdom Death: Monster was released, you probably knew about it after. Why? Because their backers did a lot of legwork, showing off their pretties to their friends, who would then envy them (I might be speaking from personal experience on this one.)  Those envious friends likely jumped on the bandwagon as soon as the new Kickstarter launched. I mean, when your Facebook feed is filled with images and descriptions like this, it’s hard not to want in on the action: 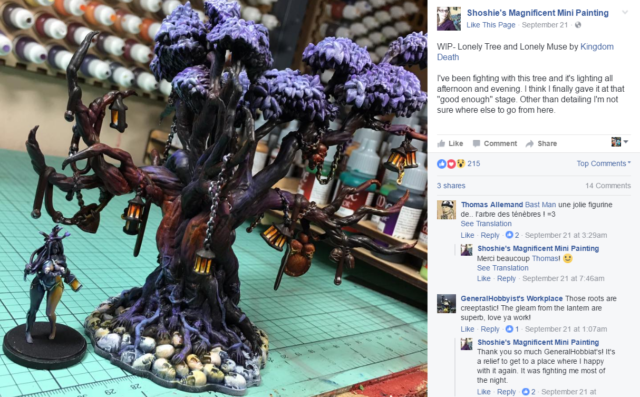 I’m a huge fan of the sculpts, and even I, as critical as I’ve been of their pinup minis (which aren’t game components), can’t help but feel massive FOMO when it comes to this game. It looks beautiful, is very fun to play and if backers will be waiting until 2020 to get their games in full, it might be a lot longer before it hits the shelves at my FLGS, which might be too long for me.

What do you think? Are you tempted by a game that could potentially crush your pet? Let us know in the comments!

Teri Litorco is lucky to have talented commission painters as friends like Liz and Shoshie to make her want to back KD, as well as willing to let her use their photos for articles like this. She’s also written the book The Civilized Guide to Tabletop Gaming. You can follow her gaming adventures on social media: Facebook, Twitter, Instagram and YouTube.