by Matthew Hart
Facebook, the social media platform on which you’re probably reading this article, is a monolith. As of this writing, the company’s total market value is $432.28 billion — on one especially good trading day, it went as high as $629 billion. In terms of reach, 2018 saw the company lay claim to 2.32 billion monthly active users. Total time spent by user population per day in the same year? 50 million hours. Total time in a year? 8760 hours.

All these gigantic numbers, which continue to grow, illustrate that Facebook is a huge part of human life. And because the future keeps coming faster and faster, and because speculation is fun, here’s a guess at what at least 50 million hours of daily human life will look like five years from now. Using Facebook’s business model, acquisitions, and product announcements as our basis for prediction, near-future Facebook could be a full-on virtual world full of socializing, dating, human-NPC interaction, and of course, highly targeted and extraordinarily subtle ads.

Facebook needs as many human eyes to stare at it for as long as possible so it can deliver ads to said eyeballs. Investopedia notes in an article titled “How Facebook Makes Money” that 99% of Facebook’s revenue comes from ads. It’s not an absurd way to make money — T.V., radio, newspapers, etc. have been doing it for a lot longer than the internet has — but Facebook is augmented by artificial intelligence, big data, and  hyper-targeted ads that focus in on their consumer like a swarm of armed assassin drones on a mission to sell things.

In 2018 digital ad revenue finally took 51% of net ad revenue in the U.S. when it hit a total of $106 billion. In the same year, Facebook’s annual revenue, which is made up of 99% digital ad sales, was about $56 billion. It’s this business strategy that’s going to guide Facebook over the next five years. The behemoth revenue engine needs constant attention, and the more people live in Facebook’s digital ecosystem, the more Facebook thrives financially.

According to TechWyse’s complete list of Facebook’s acquisitions, Facebook acquired Oculus VR in 2016 for $2 billion. Since then, Facebook has released the Oculus Rift and Oculus Go and acquired numerous companies focusing on machine vision. There are a lot of them on the list, such as Surreal Vision, which bolsters Oculus’s “scene reconstruction,” and Facebook either bought them for tens of millions of dollars or an undisclosed amount.  Along with those purchases, Facebook also bought up companies like Two Big Ears, which focuses on surround sound audio for VR and gaming.

Zuckerberg has said himself that “VR is the next platform, where anyone can create and experience anything they want.”

It’s possible that in five years Facebook is going to be almost wholly experienced in the VR world. Of course there’s a chance that it won’t catch on; VR has been a technological white what for a long time. But if it does catch on, it could come online as fast as video did for the platform. And once the tipping point is reached, too many people will be interacting in the virtual world to ignore it. We’ll move past the event horizon without knowing it, and eventually job interviews, visits with the in-laws, office meetings, and any other face-to-face communication done at a distance, will be done in Facebook’s virtual world.

Because Facebook settles for nothing short of worldwide dominance in the social media space (at least), it purchased the app WhatsApp for $19 billion in 2014. Five years on, WhatsApp, a messaging application that allows for text and video exchanges, as well as options like “stories,” has 1.5 billion monthly active users.

Facebook made this purchase not only to prevent the growth of a competitor, but also to introduce another possible revenue stream. Lots and lots of revenue from — you guessed it — showing people ads as they message each other. This acquisition helps demonstrate Facebook’s intent for growth: the company plans on integrating WhatsApp, Instagram, and Facebook messenger to make one super, streamlined messaging channel that works across all three platforms. (As of 2016, Facebook messenger and WhatsApp combined daily message count already dwarfed number of messages sent per day via SMS 60 billion to 20.)

But despite that gargantuan global messaging service, Facebook is still missing out on an enormous chunk of life that is firmly in the realm of digital social interaction: romance.

The company announced its foray into online dating at its own F8 Conference in May, 2018, and since then has rolled out its dating service to multiple countries such as Canada, Thailand, and Colombia. The Financial times recently noted that Facebook’s dating app “suggests dates based on your Facebook behaviour and interests…” and that “users can also use Facebook’s Events and Groups to find a match.” 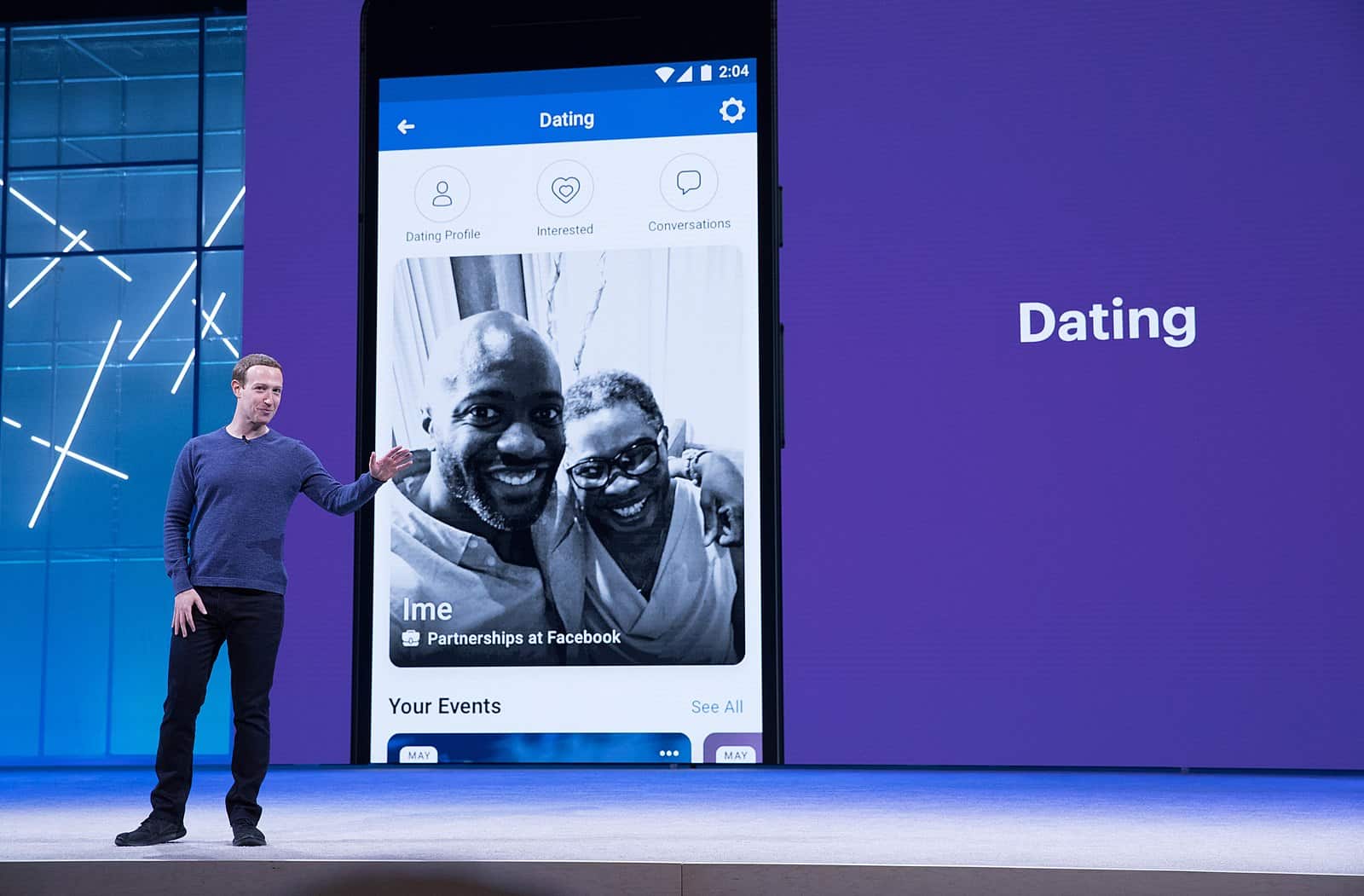 If trends hold, in five years, Facebook will have hundreds millions more users, and with WhatsApp, quite possibly the whole world. Coupled with a probable invasion of the dating sector, it’s reasonable to think that in 2024, Facebook will have its hand, its brand, in every aspect of every person’s online social life, from first virtual kiss to last virtual goodbye. Meeting in Facebook’s virtual world before meeting in the real could be the norm.

And while the dating sector is only projected to be worth $3.2 billion by 2020, Facebook could obviously grow this number with its enormous global reach.

Five years from now, instead of waking up and checking their Facebook apps on their phones, people will wake up, strap on their Oculus Go Gen III headsets, and be transported into Facebook’s virtual world. Like some surreal combination of the Miiverse and Ready Player One, the Facebook world will be everybody’s first bright stop in a universe populated with the digital avatars of Facebook users.

If two people want to, they can be transported into the same “area” of the Facebook world instantly. And thanks to Facebook’s dating A.I. that suggests dates based on user profiles, as well as WhatsApp’s enormous global reach, people can be sure that they’ll be going “out” with the most suitable person in the world.

When somebody can’t scare up a real date, they can go out with an NPC that emulates a person well enough to pass as one most of the time. Not only used for dating, the NPCs, which could be morphed to look like anything or anyone, will be the virtual faces of companies, religious institutions, museums, clubs, every type of organization that’s currently on Facebook (i.e. all of them).

And the ads will be everywhere. Some of them with be obvious and expected, but others, will be so clever, so subtle, you’ll never even be sure if they’re really ads or not. As you flirt, chat, talk, and play games with friends, there will be ads everywhere — just like now, except far more integrated. Maybe you’ll go on a driving adventure with a Ford NPC friend or skydive out of a United Airlines plane.

This will be Facebook in five years if trends continue toward the revenue-driven virtual world that grows ad infinitum within our own. Hopefully whether or not we choose to “like” it will matter.