WEREWORDS is Back With a New Deluxe Edition - Nerdist

WEREWORDS is Back With a New Deluxe Edition

Everyone knows 20 Questions. It’s a classic activity that’s amusing and appeals to just about anyone with a pulse. You know what makes it better? Toss in a traitor and kick on an aggressive countdown. This is Bezier Games’ Werewords.

The intriguing combination of a word game with a social deduction experience is completely rad. While potentially blasphemous, I’d even go so far as to say this is a superior experience to the ubiquitous Codenames. It relies less on intimate player knowledge and it rides to its satisfying completion with virtually no downtime. Indeed, better than Codenames and I’m sticking to it.

One of the shortcomings of the 2017 release of Werewords is the lack of roles. You get Werewolf staples like the Seer, Wolf, and Minion — but that’s really about it. The deluxe edition of this game is here to rectify this niggle.

The best way to classify these new characters is through a tiered approach. At the top are the Apprentice, Fortune Teller, and The Thing. The Apprentice is one you will likely include in all of your plays. It’s a failsafe for when the Mayor – the player answering with yes or no to player’s questions – happens to also be the Seer. The app calls out the Apprentice and has them peek, revealing the word to them if the condition triggers.

This is a satisfying inclusion because it avoids a situation that often saps energy from the game. It does have the downside of making it easier for the wolves to nail the Seer at end game, but that’s a cost you can assess based on player count and your desired experience.

Sticking with riffing off the Seer for a moment, The Fortune Teller is a neat option as a low-calorie replacement. She doesn’t know the entire word, but rather is shown the first letter of each keyword. This is, of course, a bit unpredictable but it’s gnarly as it allows for a lightbulb moment when they piece the clues together. It’s also very useful in tailoring difficulty to your group as it softens the effectiveness of the Villager team.

The final entry in the most useful of roles is The Thing. This dude – who’s really just a maimed hand – must touch another player on the shoulder. This is hilarious because it makes people uncomfortable while allowing you to yell “NO TOUCHING!” and reminisce upon when Arrested Development was actually legit.

There are of course strategic considerations. If a player knows you are The Thing it can be used to aid or hurt you later in the round. Imagine a situation where you tap a Werewolf. Later if the village team guesses the word, the wolves will know that you’re not the Seer or Fortune Teller. Whoops.

Now, if instead you happen to tap a Villager on the shoulder – well, then you’re golden. You can leverage that information to inform the hanging that may later occur. This role comes with a bit of risk, but it can spice things up and change the dynamic. That’s really all I want from new options. 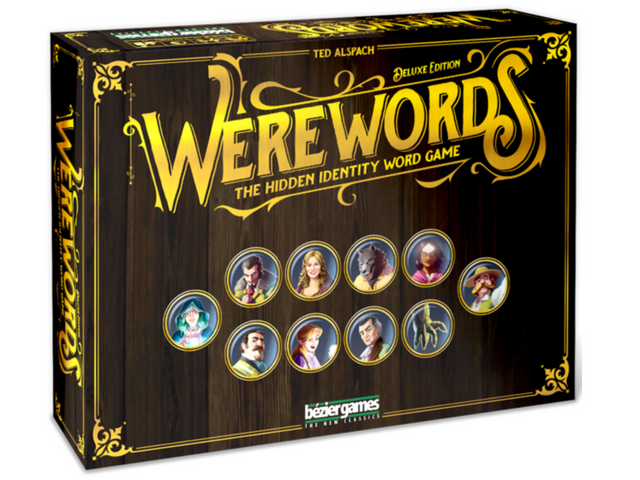 The challenge with the other two roles is in their usefulness. The Masons do what masons do and wake up at night to see each other. I love this application in One Night Ultimate Werewolf, but it feels a little less useful in Werewords. Since roles cannot get swapped or manipulated, the information provided is substantial. To mitigate this they really should only be included in games with large player counts. With this perspective, they do work fine and have utility. The difficulty is that it you will rarely need them and they’ll sit uncomfortably in the bottom of the box waiting for a better day.

The Doppelganger likewise is a bit of a toss-up. This is a power that is really all over the place. You wake up and look at another player’s card, then mimic the action of the role. Occasionally it will produce moments of wild amusement or hectic drama, other times you will see the wolves multiply and balance will be thrown out of whack. Again, it’s most effective in larger games where the swings in power are naturally minimized.

And that’s it. If you anticipated Werewords Deluxe as a significantly expanded product with a glut of new content, it’s not quite that. However, as an upgraded version of the base game with some neat additions, this release totally delivers.

Provided alongside the expanded roles are larger tokens, massively improved artwork, and new game modes. I especially appreciate the cute “WAY WAY OFF” token that the Mayor can slap in the middle of the table. Sometimes the group will be on a tangent concerning toiletries when they should really be focused on snack foods (don’t ask how we got there).

The new modes are a mixed bag. Speedwords is a nice breakneck way to play the game and one most will find useful. The two player option, on the other hand, is a bit flat. That’s not a particularly huge loss as I can’t imagine wanting to play this with only a single partner. You’re better off just tossing on a hard difficulty with a short time limit and just seeing if you can get the word.

Nevertheless, we must judge Werewords Deluxe as a complete package. While the new content isn’t sprawling, it’s certainly interesting and offers a nudge to an established group metagame. The price at retail is extremely affordable and this release offers extended depth and hundreds of plays. If you’ve managed to avoid this title thus far, now is the time to hop aboard the wagon and grab a pitch fork.

Have you played Werewords? Let us know in the comments!  And be sure to join host Becca Scott on Game the Game every Thursday here on Geek & Sundry to watch the best boardgames played with fantastic guests!