I Made My Own FRIENDS Eat Rachel's Beef Trifle - Nerdist

I Made My Own FRIENDS Eat Rachel’s Beef Trifle

When I made Chidi’s Peeps and M&Ms chili from The Good Place, I didn’t make anyone else eat that vile, nightmarish concoction. That didn’t spare my wife from the horrible smell that permeated our house for two days, but it did likely save our marriage from its own existential crisis. However, no one should go through life by themselves and no one should have to suffer through an atrocious meal created by a fictional person alone. Life is meant to be spent with others, and that kind of culinary horror should be a communal experience where everyone comes together at the end. Even if it’s coming together to hate the chef. So with Thanksgiving around the corner, what better way to accomplish that than by forcing the people I love to eat Friends‘ Turkey Day disaster dish, one of the most infamous culinary mistakes in TV history.

That’s right, I made my own friends eat Rachel Green’s beef trifle.

I prepared the half traditional English trifle, half shepherd’s pie dessert monstrosity and served it to some of my nearest and dearest.

Spoiler: it was not pleasant to eat. But don’t worry, I rewarded them all with a “good” version so they wouldn’t disown me.

I know others have done this before, including the great YouTube channel Binging With Babish. But I did not watch or read anyone else’s instructions or attempts. My only guide was Rachel herself. She told Ross and Joey what was in hers, layer-by-layer from the bottom up: 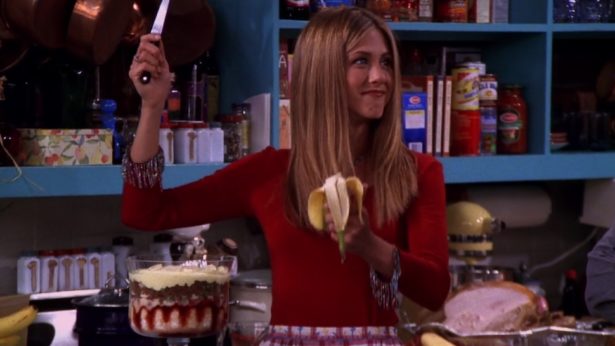 I did take a couple of shortcuts. I didn’t make custard from scratch and used instant vanilla pudding. That’s also Cool Whip instead of homemade whipped cream. For the beef portion I chopped a medium onion and threw it into a pan with a pound of ground beef (85/15 lean to be specific). I also tossed in a cup of frozen peas, which are much greener than canned ones and easier to cook.

My biggest debate was whether or not to season the beef. Salt and pepper would make this taste even grosser, right? It would bring out the beef flavor, which is bad, but not doing so seemed wrong. Cooking ground beef without salt offends my soul. (I wish this was an exaggeration, but this was the internal debate I really had while cooking.) So I added salt and pepper. Less than I normally would have, but more than I should have for this stupid thing. 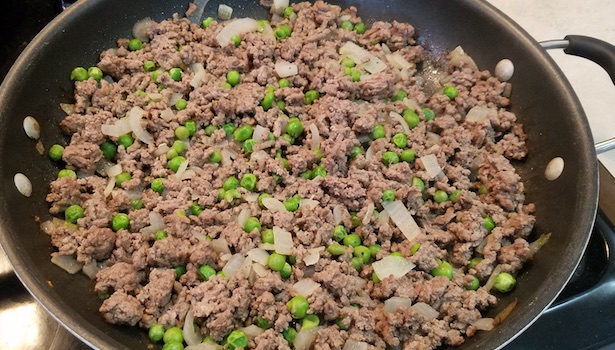 From there, it was pretty easy to layer everything. I used about six to eight ounces of jam, and the trifle looked and smelled really good. 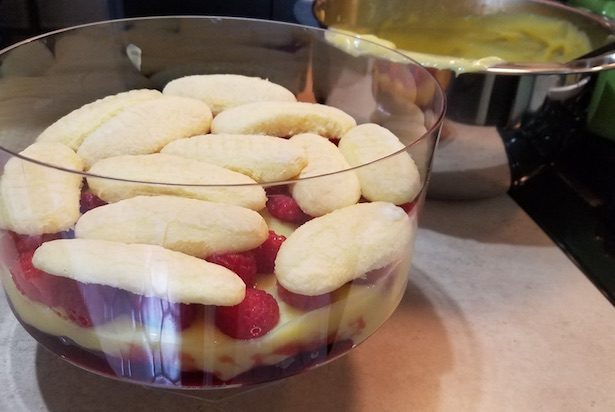 Yeah, that’s the instant pudding. LEAVE ME ALONE IT WAS EASIER TO USE INSTANT.

Next, I took the beef mixture out of the fridge and that was the first time things got weird. Merely adding the onion-smelling beef to the room was far more bizarre than if you had both your meal and dessert out. As though my nose was desperately trying to convince my brain not to do this.

The beef spread easily ruined everything. Then I topped it with bananas, which somehow made the peas stand out even more. Finally I topped the rest with Cool Whip before putting it in the fridge. 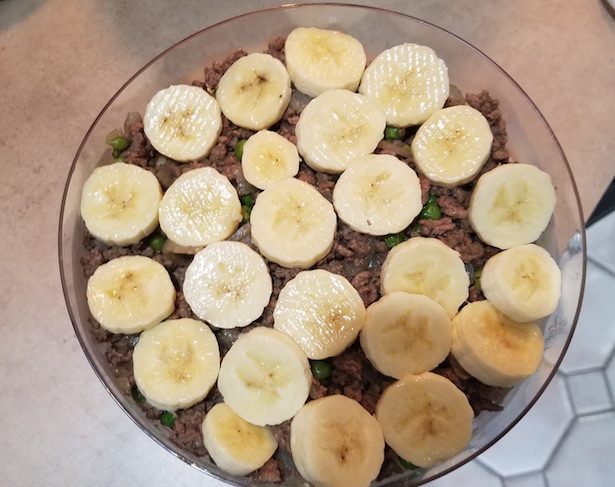 The bananas really brought out the peas. Unfortunately.

“So no one told you life was gonna be this way…”

I took my two trifles (we’ll get to the second one later) to my friend’s house to watch football. They knew I was bringing dessert, but I didn’t mention any specifics. I’m not history’s worst monster, so I didn’t trick them into eating it. I warned everyone what I’d done and how they were all going to be famous for eating it. That was an obvious lie. My friends—let’s call them Jenn, Patrick, James, and Josh because those are their real names—thought they “had” to help me for work (lie number two). So they were all good sports who agreed to eat it with minimal disgust and complaining.

This despite James and Patrick not knowing anything about the Friends episode. This will be incredibly important shortly. 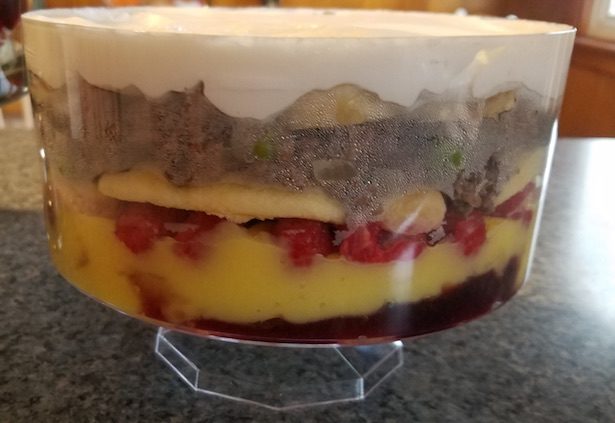 Yup, that’s it. I have some regrets. Almost all of them really.

I served everyone a scoop-sized serving and told them they had to finish it if they wanted to eat the second “good” version. It was a lie. I wasn’t going to deny anyone the tasty dessert, but I needed some feedback so this column would work. Yes, I lied to my loyal friends for you dear readers, because #content.

So how was it? Rachel’s beef trifle is freaking weird. But maybe not for the reason you think. It’s unpleasant, but slightly less gross than you’d guess, because the beef is easily overcome by both the jam and the whipped cream. The loose meat does make the whole thing uncomfortably chewy, prolonging every bite far more than you’d like. However, some bites were even good so long as you had enough sweet stuff to ignore the beef.

Ultimately almost everyone got it all down, but it wasn’t pleasant. It wasn’t even funny because we were all suffering—except when Josh pulled a Ross and sped through his as fast as possible. 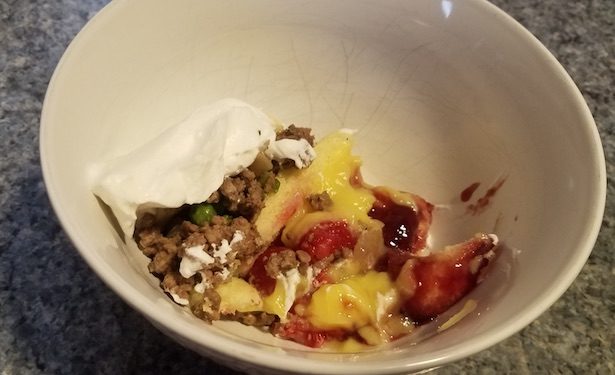 It smells as weird as it looks.

The real problem was that any bite with peas or onions was vile. The trifle didn’t taste like “feet” the way Ross described it, but any bite with a pea, which would explode with an overpowering flavor, or any bite with onion, was sort of feet-like.

Then something incredible happened. Something we thought was a joke until we remembered he had never seen the episode: James asked for seconds. I swear I am not making this up. James was our own real-life Joey Tribbiani. “What? It’s not bad and I’m hungry,” said James. He had some regrets during his second serving however. Maybe he didn’t get as many peas and onions in his first scoop, but within seconds he seemed to agree with the room’s general assessment that this is not something you should voluntarily eat. 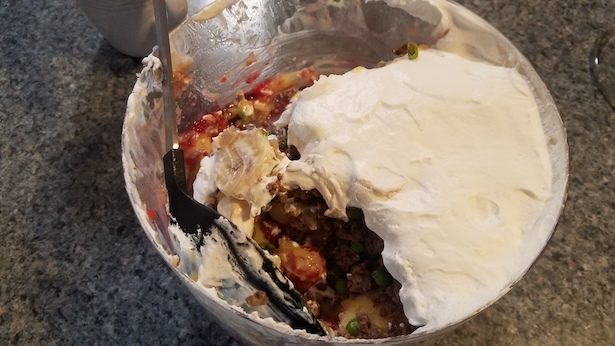 I’m amazed we ate that much.

Here were some of the best reviews from the room:

“It’s the surprise onion and pea that gets you.” – Patrick
“When you get a beef heavy bite it’s really funky.” – James
“Not as bad as I expected. The beef was disgusting. If you don’t chew it it’s fine.” – Josh
“The beef needed more seasoning.” – a DEADLY SERIOUS Patrick

Last year we wrote about a “good” version of this recipe created by Bren Did, which replicates the look of Rachel’s trifle without using meat so it’s an actual dessert. To reward my friends for doing this I also prepared that version as an actual dessert for us to enjoy. The “beef” is shredded coconut with Nutella. The “peas” are balled pieces of kiwi, with sliced pieces of pears as the “onions.” 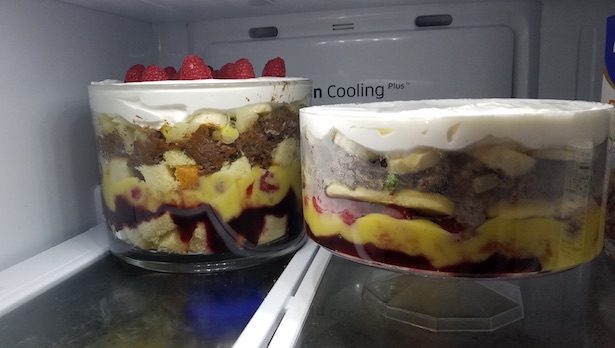 I made the good one much bigger. Think you would have known which was which?

The recipe replaces ladyfingers with pound cake, and I mostly followed it. Once again I used instant vanilla pudding and Cool Whip. (I eat way too much garbage to deal with any of your nonsense complaints.) Everyone enjoyed it. Some people didn’t love coconut, some weren’t huge fans of bananas, so everyone had a tweak they would have made, but no one disliked it. 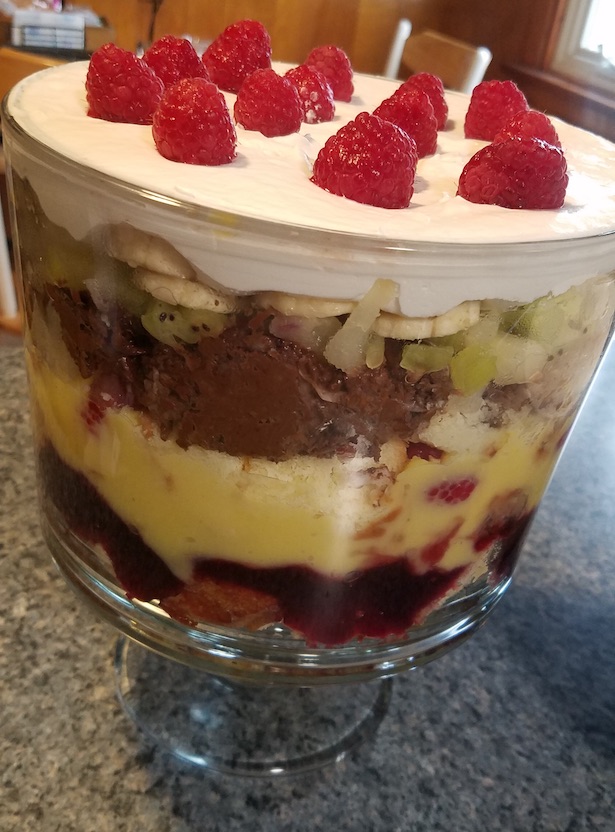 It looks bad intentionally, but it tastes good.

If you attempt to make one for your own Friendsgiving (and it’s a simple, super fun, perfect recipe for that), my advice for you is to follow the instructions when it calls for unsweetened coconut. As a coco-nut who loves the stuff, I used sweetened, but the dish doesn’t need the extra sugar.

Try jam with less sugar, too. Also, “balling” the kiwis with a straw was a disaster. Either be far more patient than I was or come up with another green foodstuff to use. I would also make sure your raspberry layer is really full too, for more freshness. 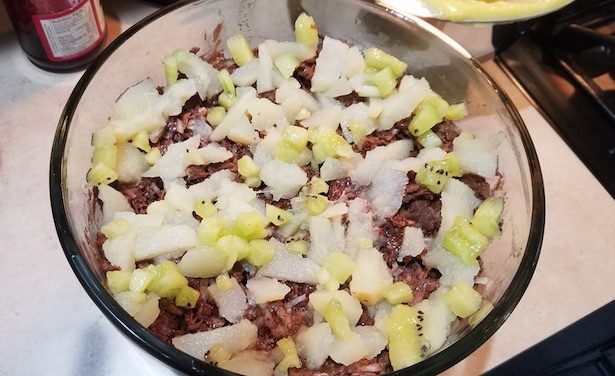 You can really see where I gave up on the kiwi “peas” and just started chopping them up – almost immediately.

Custard (a.k.a. pudding)? Good. Jam? Good. Meat? Good. But not together. Never together.

Ross was sweet for eating his entire plate so he wouldn’t hurt Rachel’s feelings. Joey was a monster for genuinely enjoying it. The are only three scenarios for a human to voluntarily consume Rachel’s beef trifle: 1) You were starving and desperate. 2) You are really drunk. 3) You’re a good enough person you’d do something stupid to help out your idiot friend who successfully pitched a column about feeding his own friends garbage before he asked any of them to actually eat it.

And really, isn’t that what Thanksgiving and friendship is all about? No, seriously, isn’t it? I’d like to keep my friends so I’m hoping they’ll swallow this saccharine crap and not hold this trifle thing against me, since, unlike Rachel, serving it to them was no accident. 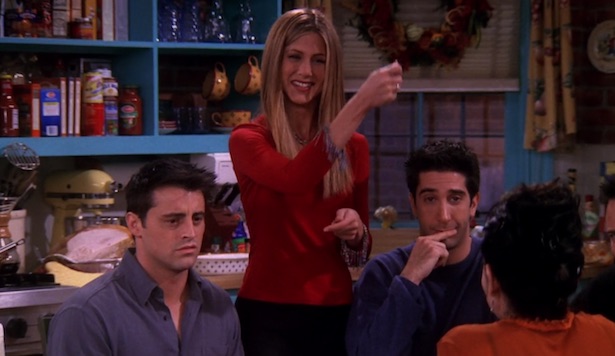