In every DnD game, there are Chosen Ones.

They alone will stand against the vampires, the demons, and the forces of darkness.

They are the PCs.

That’s right. We made a second round of Buffy character sheets just for you!

Anyanka, the Patron Saint of Scorned Women, would definitely be a warlock with D’Hoffryn as her fiend patron. To reinforce her demonic connections, we’ve made Anya a tiefling in this sheet. Since Anya has a love of money, commerce, and business, we gave her a background as a Guild Merchant. Anya’s power stemmed from fulfilling the wishes of scorned women in disastrous ways, so most of her spells focus on charming people and messing with people’s heads. Anyanka has been around for a millennium and has gained much knowledge of the world through that time (although she still misses a lot about modern day cultures) so we gave her a high intelligence. When RPing as Anya, make sure that your character is proficient in history but is awkward in her daily interaction. 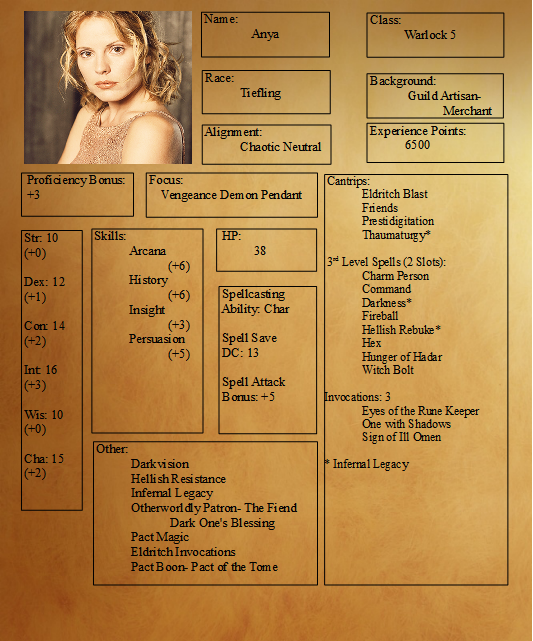 Daniel “Oz” Osbourne is everyone’s favorite werewolf bass player. Unfortunately, werewolves aren’t listed as PCs or NPCs in 5e’s Player’s Handbook or Monster Manual, so here we based Oz on his human stats. Many DMs incorporate were-creatures in their campaigns so, if you want to RP as Oz, talk to your DM about how to incorporate were-stats into the character. Given that Oz is the bassist for Dingoes Ate My Baby, it makes sense to have this loveable hair-hopper as a bard and entertainer. When RPing as Oz, remember that his smarts are on par with Willow’s (they were the only two to score on a placement test at a level that a secret agency wanted them). Many might not understand giving Oz Vicious Mockery, since he’s known for being a man of few words, but when Oz does speak he gets to the heart of the matter. Oz’s way with words means he could easily hurt through words alone, though it’s not in his nature to do so. 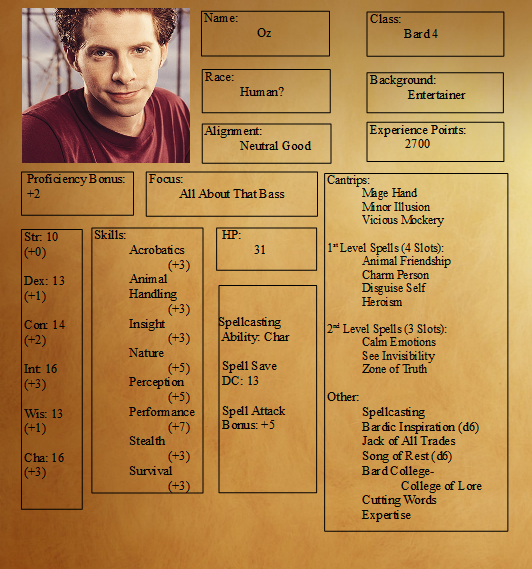 Oh Dawn, the little sister Buffy suddenly had in season 5 who turned out to be a mystical ball of energy known as The Key. Dawn is not known as a favorite among Buffy fans, but there are those who would want to RP as the little sister of the slayer. For this sheet, we’ve made Dawn a low-level sorcerer with a Wild Magic origin as a nod to her mystical origin. Dawn’s spells mainly focus on disguise and defense. Given that the entire Scooby Gang didn’t know Dawn was The Key, and Dawn’s trouble with stealing things and acting out, we’ve given her the Charlatan background. Dawn’s a teenager and doesn’t exactly have the best moral compass, usually aligning with good because that’s where the rest of the Scoobies fall, so, in true teenager fashion, we’ve made Dawn neutral. This way, we can explain why she sometimes follows the law and sometimes breaks it, sometimes has a moral compass and sometimes doesn’t, and allow her the potential to grow as a person. When playing as Dawn, remember to channel your teenage angst and enjoy the fact that you can take this character almost anywhere. 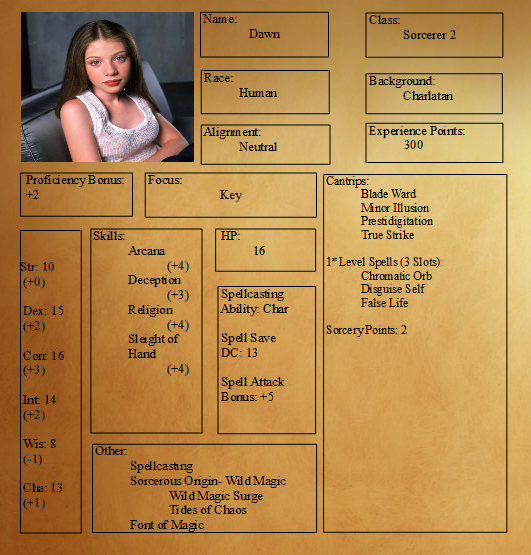 Now this is a tricky sheet. Most people consider Angel and Angelus as separate entities when RPing (usually Angel’s a PC and Angelus an NPC), but it’s important to remember that they are actually two sides of the same coin. For this reason, we gave Angel a level as a Warlock with The Fiend Patron (Angelus) before multiclassing him as a fighter. Since Angel is a vampire, we actually did some customization of the Vampire Spawn NPC found in the Monster Manual, mixed with regular PC rules, to create this sheet. The vampire traits and weaknesses listed are those that are found on the Vampire Spawn, but make sense in the BtVS universe. Since vampires gain a bit of juice when they become undead, we added an additional ability score improvement to the character. This improvement should help counteract the pretty strong vampire weaknesses so that the character remains balanced. Since Angel and Angelus are the same person and a moment of happiness is all it takes to switch between the two, we left the alignment open here. 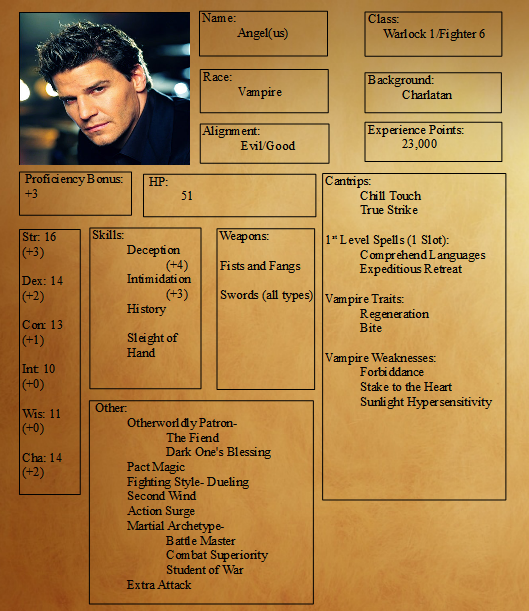 Our final character sheet is for the vampire that breaks all the rules; Spike aka William the Bloody (Awful Poet). Just like with Angel, Spike’s an adaptation of the Vampire Spawn NPC mixed with regular PC rules (same ability score improvement boost). Spike has always been more of a brawler than martial fighter so we’ve made him a Barbarian here. Although William was never a Noble, he was part of the upper class of Victorian-era London so we’ve made his background Noble to represent that upbringing. Many might argue against making Spike a Chaotic Neutral alignment, but it makes the most sense for this character. Spike is primarily interested in enjoying life and living the way he wants and will do what is necessary to maintain that life. Spike is the vampire who killed the Anointed One, went out on Halloween when all other monsters would stay in, and partnered with the Slayer to save the world because he enjoyed it more than hell. Remember to mention the Sex Pistols, how Billy Idol stole your look, and crash through signs with your DeSoto when RPing as this character. 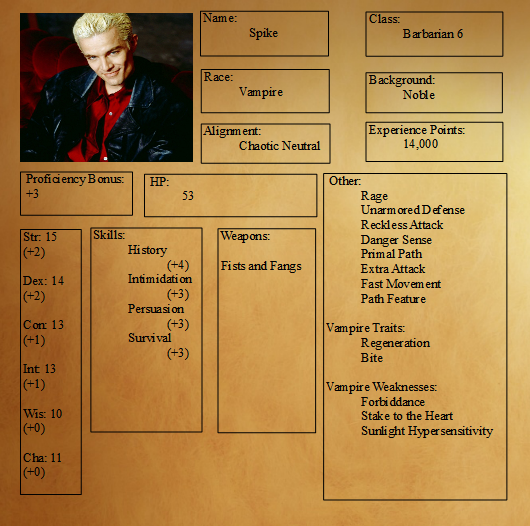 And that’s the end of round 2! Did you agree with our choices? Which fandom should we make character sheets for next?

All Images Credited To: Mutant Enemy