In June,  The Wednesday Club  chatted about the unforgettable series The Sandman by Neil Gaiman. Because we are huge fans of the series, we had to ask ourselves what alignments and classes the Endless would be if they were D&D characters. After much thought, here’s how we’d imagine them if we were to play them as D&D characters. 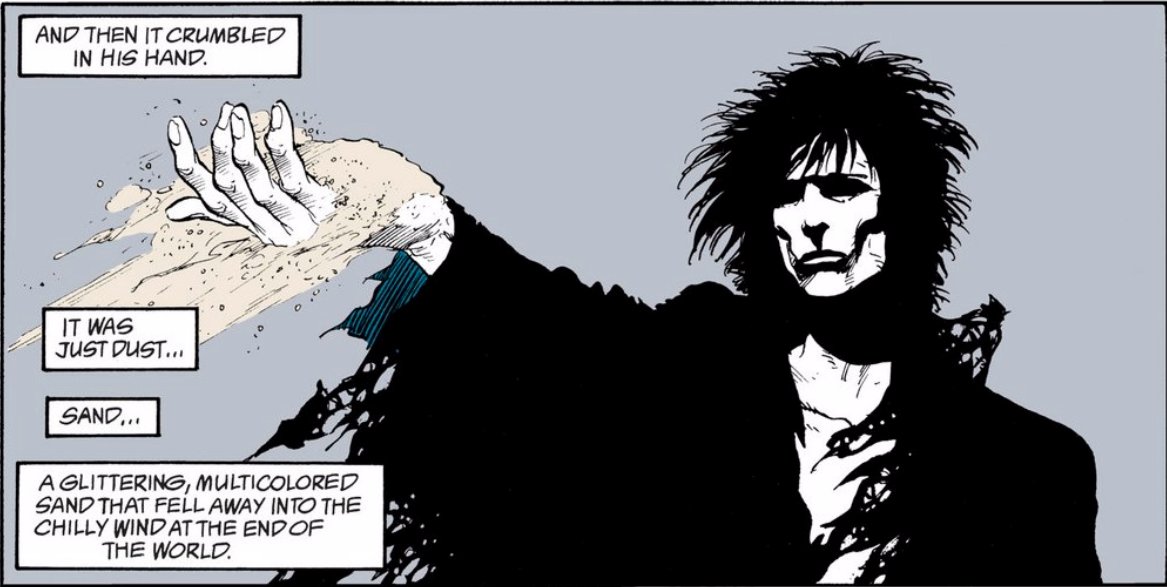 At first blush, Dream doesn’t seem to fit with Druid, but consider his connection to the waking world.  What does he grab from a dreaming guard to free himself? A handful of sand. His pouch of sand is the first of his tools that he retrieves on his way back to the Dreaming. It is earth.

He also has ravens, specifically Matthew, that he uses to be his eyes when he is unable to leave the Dreaming. That would easily be the spell Beast Bond. And let’s not forget his connection to the elements of the Dreaming. Merv Pumpkinhead points out that it only rains when Morpheus wants to be mopey and sit in the rain.

His Circle is obviously Dreams, if for nothing else than Walker in Dreams. It also fits because of his relationship to the fey courts. A Midsummer’s Night’s Dream anyone? 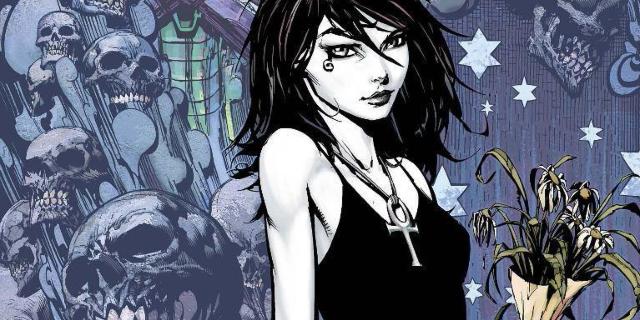 Why not the Death Domain? The interesting thing with Neil Gaiman’s version of Death is that she doesn’t kill. She is just the friend you meet after your death. Take the story Façade. Rainie begs her for death, but it’s not something she can give. Instead, she leads Rainie to the one that can gift her with the end of her life.

Death is as good as they come. From dressing down Dream for the way he treated Nada to the fact that she takes human form once a century to keep herself grounded as to why she does what she does. 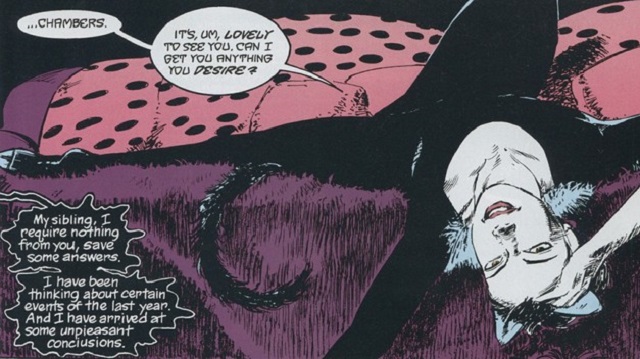 Oh yes, Desire, the sister-brother of the Endless. The selfish, meddling sibling. Chaotic Evil should come as no surprise as their machinations has caused Dream and mortals alike no end of suffering. They play with the humans in their club, making people fall madly in and out of love.

The Mantle of Majesty fits perfectly with Desire’s ability to become the person you desire most, be it male or female. As pointed out in The Doll’s House, Desire lives in the heart. 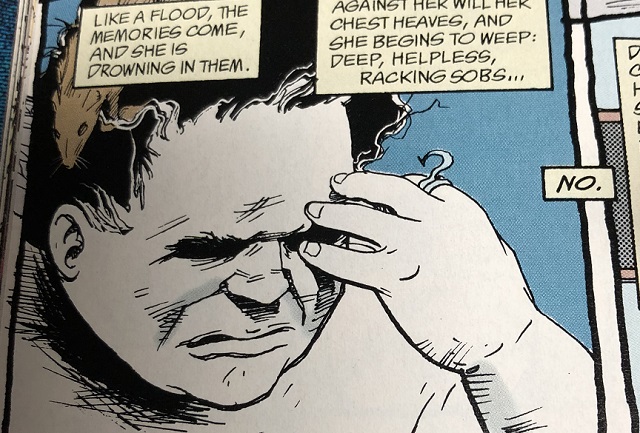 Despair was a hard one to pin down. We went True Neutral because she doesn’t really pick sides, even when her twin, Desire, is doing the asking. Hide in Plain Sight could be because she’s watching you through the mirror and you never notice. Why else would we feel worse after checking ourselves out? She also has Animal Friendship going on all of her rats.

We went Gloom Stalker because of the extra spells of Fear, Disguise Self, Greater Invisibility, and Seeming -all fit with the aspect of Despair. While we don’t see much of her in the comics, she is one character that sticks with you. 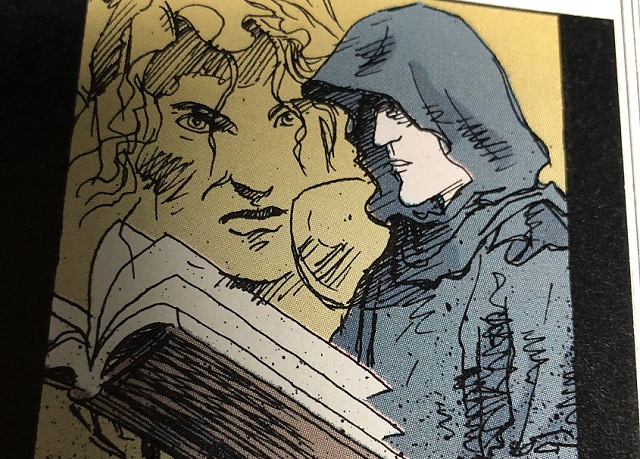 Let’s all be honest, this should come as no surprise to anyone that’s read the series. Destiny carries a book that tells him everything that will happen… Mostly, if you believe Delirium. Although he is blind, he can see all the pathways and which one will be chosen. Even when he sees himself in his garden, he’s not surprised, but it does give him a chill. 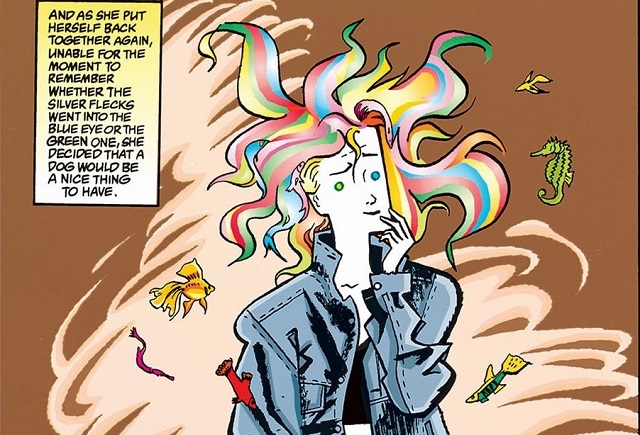 At first glance, this one seems like a stretch, but if you dig deeper into Delirium, it fits. Strength of Mind allows her to replace her Wisdom (which she rarely uses) with another attribute. She may be highly intelligent, but she doesn’t know how to use what she knows.

During her travels with Dream, she tells Destiny there are paths outside his garden and things not in his book. That could be a use of Psionic Investigation. And of course, she does pick up Animal Handling when given Barnabas the dog. 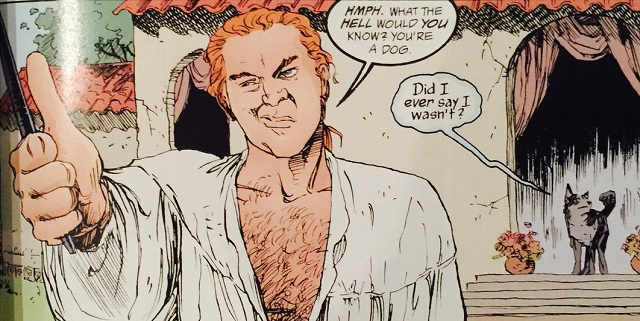 Last but not least, the member of the Endless that has turned his back on his duties. Destruction is a fun conundrum because he has taken to creating. We went with Artificer to showcase his… talent? He’s not very good at creating things. Sculptures left half-chiseled, poems scribbled out. But for him, it’s clearly the effort that counts.

We wanted to showcase both sides to the coin that is Destruction, so we went the Alchemist route for him. His satchel has the ability to bring out items that can do either. He could have easily used Alchemical Fire to create the explosion he used to send his nephew to see Death in the Song of Orpheus.

Who’s your favorite character from The Sandman? Would you choose another class or alignment for the characters? Let us know in the comments!