From video games and comics to movies and books, our hosts Damion Poitier and B. Dave Walters create a safe and open forum to ask questions and discuss topics surrounding the need for and spread of diversity in pop culture. Catch Ask Your Black Geek Friend every Monday at 8:30pm PST on Twitch and Alpha.

With Force Friday behind us and less than 100 days until The Last Jedi debuts on the big screen, we talked to Ask Your Black Geek Friend co-host B. Dave Walters about his love of Star Wars.

“I’m a proud Sith American,” Walters said. “I walked out to the Imperial March music at my wedding.”

Walters’ passion for all things Jedi and Sith isn’t limited to just special occasions, either. Every Thursday Walters wields his lightsabers as a member of the Saber Guild, a non-profit, LucasFilm-approved organization.

“We don’t just stand around, we fight with lightsabers,” he said. “We put together stunt shows and do charitable demonstrations for kids.” 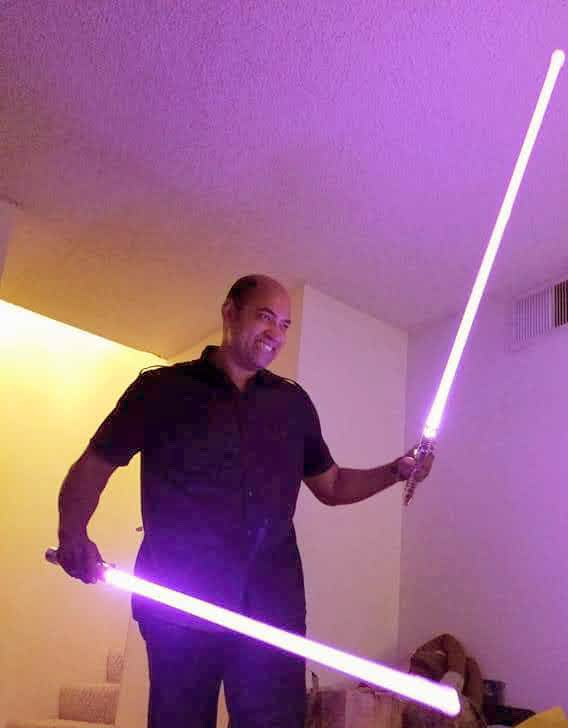 While Ask Your Black Geek Friend is a welcome space for all as it covers the entire gamut of geekdom, Walters doesn’t apologize for his stand on an age-old Star Wars debate: original or prequel trilogy?

“Even though the original trilogy are definitely the superior films, my favorite movie of the seven is actually Episode III,” he said. “It is not the best film from a filmmaking perspective by any means, but there is so much emotion and so much intensity and everything just pays off.”

He highlighted seeing the rise of the Emperor as well as the battle between Anakin and Obi-Wan.

“For me, it was perfect. It was exactly what I was hoping for,” he said. “Obi-Wan just looks at Anakin and says, ‘I have failed you.’ That’s what’s going through his mind at that moment: ‘This is my fault.’

“To me, that is incredibly powerful,” he said.

Although Walters doesn’t believe Revenge of the Sith is the best Star Wars movie, it remains his favorite.

“Also, the  Sith win unequivocally, which is important,” he laughed.

How deep is your love of Star Wars? Tell us in the comments!