In the grim, dark future of Warhammer 40,000, there is only war. And the incident in the 31st millennia that kicked off ten thousand years of warfare was called the Horus Heresy. The Horus Heresy was Warmaster Horus Lupercal’s coup and betrayal of the Emperor of Mankind and subsequent turn toward Chaos. Nicknamed 30K by the fans, this pivotal, prequel story moment has shown up in miniature game spinoffs and expansions to 40K, and now it’s the subject of a digital trading-card game from Games Workshop and developer Everguild, called The Horus Heresy: Legions. 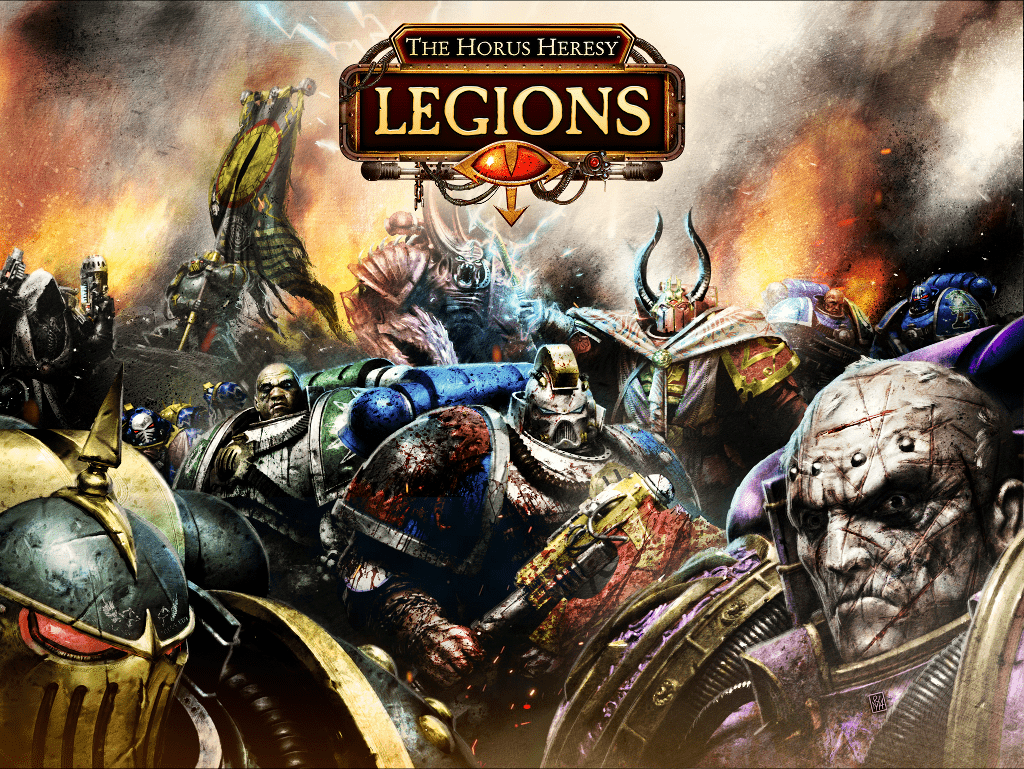 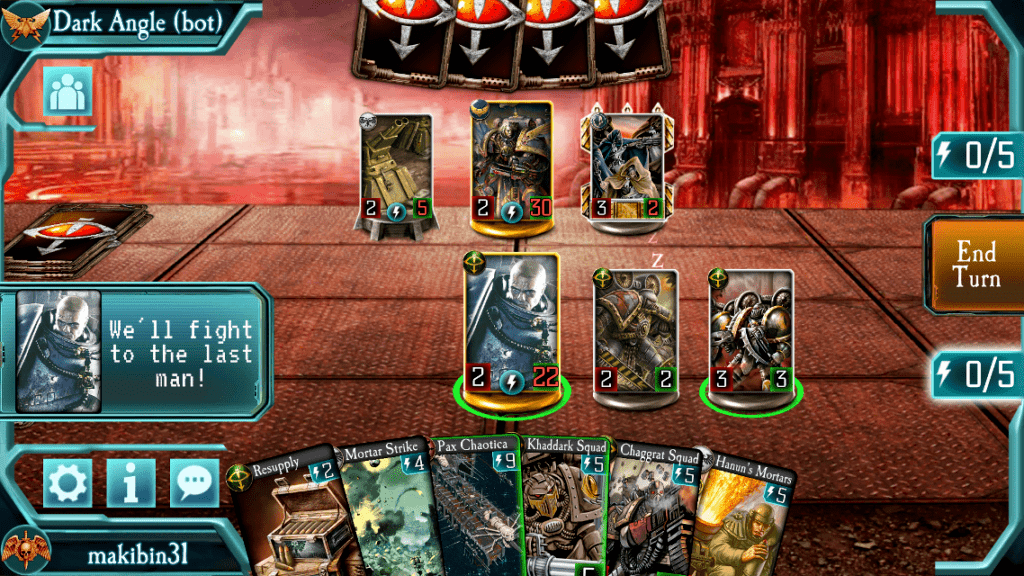 Officially launched on Android and iPhone as of July 26, The Horus Heresy: Legions is the second of two Warhammer-based card games launching at around the same time. We previously covered the other one, Warhammer Age of Sigmar: Champions, a game based on Games Workshop’s other flagship game, Age of Sigmar, with a digital and physical game launching at the same time. The Horus Heresy: Legions, however, is a digital-only release.

The Horus Heresy: Legions features tried-and-true gameplay similar to Hearthstone, Shadowverse and The Elder Scrolls: Legends: players play troops, vehicles and other units on either side of their warlord; each can attack an opposing unit or the opposing warlord directly, with the goal to reduce their health to zero. Warlords and other characters are taken directly from the massive Horus Heresy expanded universe. Tactics can also be played to alter the course of battle. Energy starts at 2 for each player and increases by 1 each turn.

Significant differences abound between this and other Hearthstone-like games. Warlords have their own attack damage (usually 2) and can attack themselves; they also return that damage to troops and warlords that attack it. This means that troops die frequently. Warlords also have a special, activated ability they can perform instead of attacking; these range from dealing damage to making troops or tactics cost less. 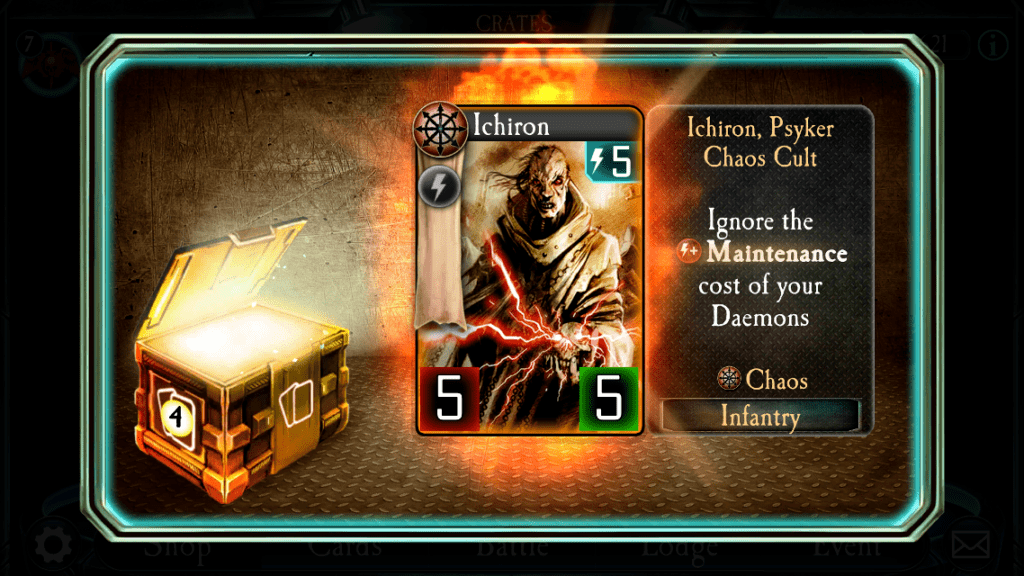 The Horus Heresy: Legions is also significantly generous with in-game rewards. The game throws loot chests at you frequently, which are filled with cards, in-game currency and fully-voiced emotes for each warlord. Joining a lodge (a kind of guild) will gain you even more rewards as your guild wins matches.

Deckbuilding is freeform; a player is only restricted by building from the Order card pool (Space Marines and their allies) or the Chaos card pool (Chaos Space Marines, demons and other bad guys), depending on whether the warlord is Order or Chaos. However, sticking to the same specific faction as the chosen warlord, or building a deck toward that faction, is often a good call because of card synergies. 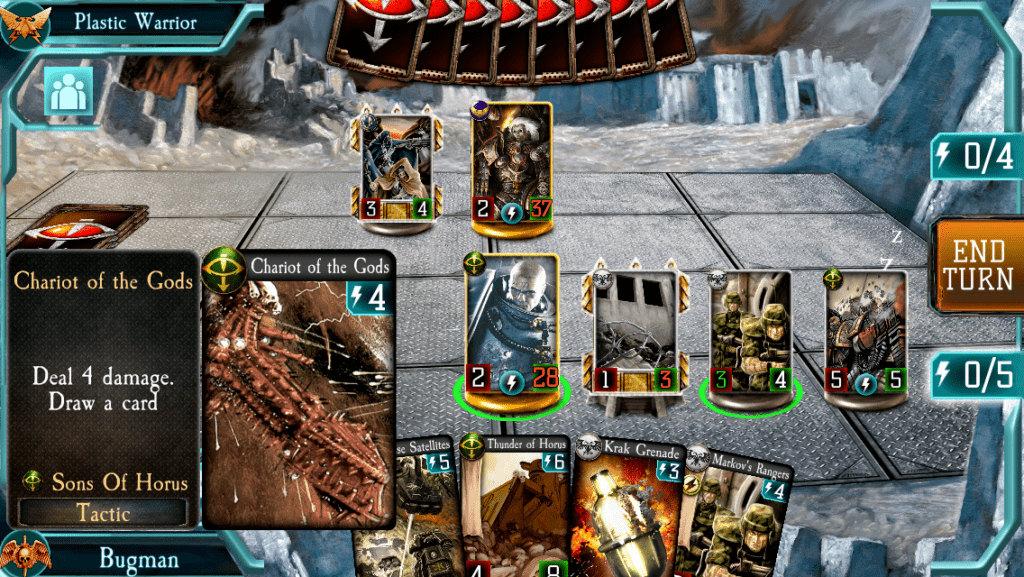 Other than one-versus-one gameplay (which matches you up with bots if there’s nobody around), there’s a sealed-deck mode that requires a ticket to enter; luckily, tickets are frequent in-game rewards. You don’t get to keep the contents of the sealed deck, but you can choose factions not available out of standard chests, and win cards from those factions through event rewards.

The Horus Heresy: Legions is a fun, casual game to pick up and play, and since it’s just getting off the ground, there’s a lot of room to experiment with decks as your card collection grows without worrying about the player population having the best deck en masse. Though there’s a short tutorial campaign when you launch the game for the first time, it could really use an extended, robust campaign mode that explained the Horus Heresy story in detail for casual fans. Despite this omission, this game is worth a free download.

Magic: The Gathering’s Kaladesh Preview Card: What did You...