Warhammer Underworlds: Shadespire's New Warbands are Here and They're Shaking Things Up - Nerdist

If you love boardgames as much as we do, you’ll want to check out our shows How to Play and Game the Game both hosted by Becca Scott. She breaks out the best of the board gaming world, explaining the games and playing them with guests every week here on GeekandSundry.com.

Shadespire was one of our favorite games of 2017 for good reason. It’s a fast-paced tactical skirmish battle you can play in under an hour and features the highly detailed Citadel miniatures we expect from a Games Workshop product. It initially released with two warbands – Stormcast and Blood Reavers – and we quickly saw additional releases. The Orruks brought a hard-hitting aggressive playstyle, while the undead Sepulchral Guard moved slowly but in overwhelming numbers. The next two warbands are now here and they have similarly distinct styles. More importantly, the universal cards have shaken up the competitive scene and are worth picking up before your next tournament.

The Fyreslayers of Age of Sigmar are a stout and powerful faction, with a fascination with all things gold and shiny. These Chosen Axes are no different. Descended from the ancient god Grimnir, Fyreslayers embody stoicism, resolution, and a desire to smack someone upside the head with an axe. Or a hammer. Anything handy, really. They’ve come to the Mirrored City seeking glory and gold, and aren’t going to let anything get in their way.

This faction’s initial stats don’t seem like anything special, but once inspired and upgraded they are quite fearsome. Inspiring them however, is a little tricky. Objectives have always been important in this game of tactics but to the Fyreslayers they’re critical. In order to inspire – that is, flip over their card and reveal extremely powerful upgrades – they have to have control of one of those objectives at the end of the round. They’re pretty slow while uninspired which makes this hard enough; it’s even harder when your opponent knows what you’re doing and can focus on knocking you off those objectives. 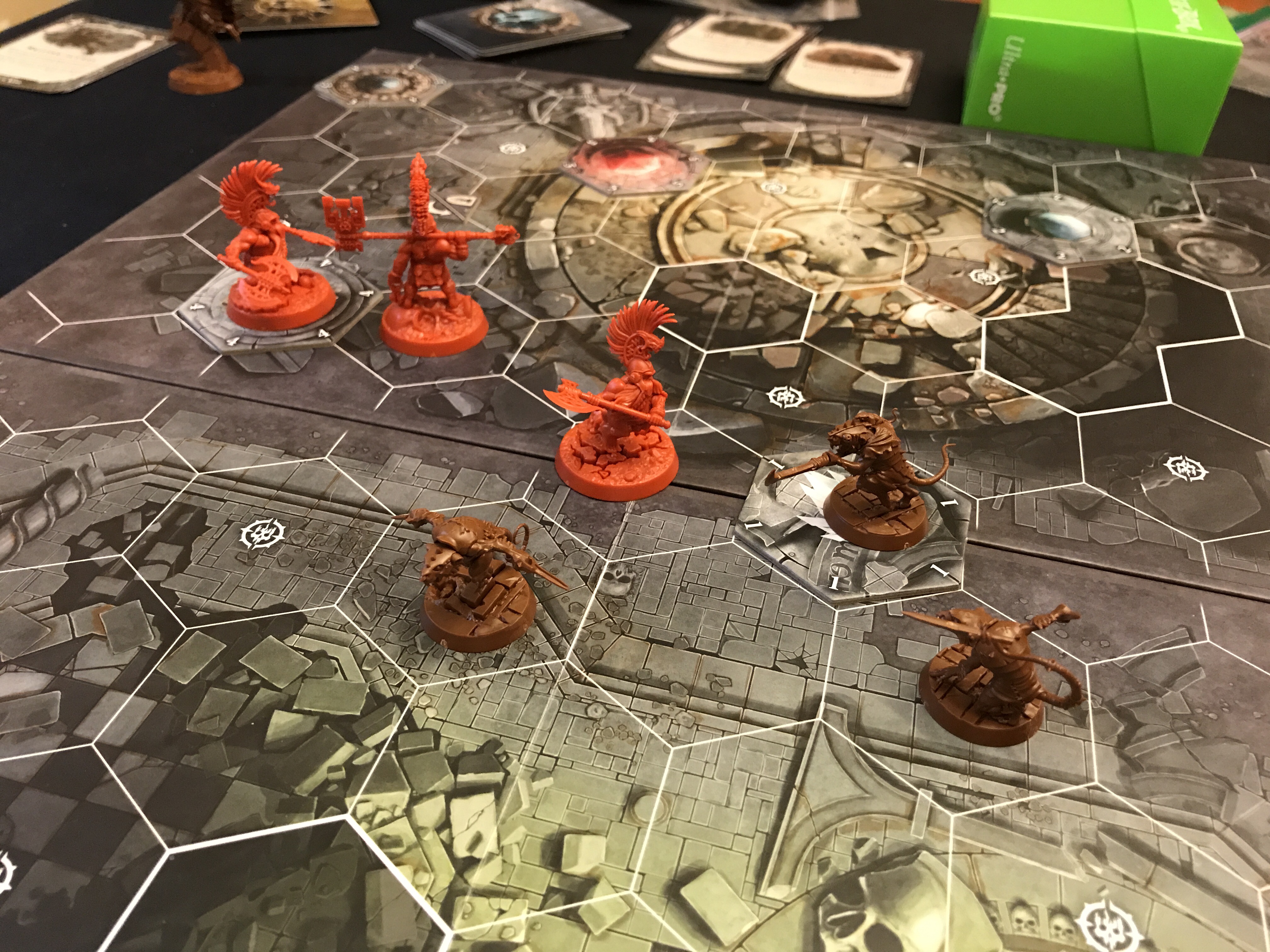 Luckily these ur-gold rune encrusted fellows have a few tricks up their sleeves. Included in the cards they bring with them are Ploys that prevent your opponent from charging or attacking, cards that prevent them from pushing you off an objective, and more. One of my favorites gives your slow-moving fighters take a burst of speed, so long as they end on an objective. Nothing like being given a bonus for something you already wanted to do.

Once you’ve landed on those objectives – likely scoring the points you’ve stuffed in your objective deck for again doing something you already wanted to do – you’ll have the opportunity to take a few different paths with your upgrades. All of these sturdy combatants are decent fighters, and with a few weapon and defensive upgrades they can be difficult to face down. If you’re facing a force with a high number of fighters – like the Skaven –  you may want to spread the love. Or, you can give all these boons to their leader. Fjul-Grimnir is an absolute monster, boasting an attack that can kill almost every other figure in the game with a single swing. That’s without upgrades. Load him up with offensive and defense upgrades, include a few tricks to squeeze some extra attacks, and watch your enemies fall to the floor like the shattered walls of the city itself.

The mirrored city is a frightening place. Phantom shadows flicker through the shards of shadeglass that are everywhere, the ghosts of fallen heroes whisper in your ear. Or maybe those aren’t in your imagination; they could be the forces of Skritch Spiteclaw’s Skaven swarm, a band of vicious rat-creatures that fight for gold or blood. The second expansion in this release is Spiteclaw’s Swarm; it features 5 miniatures and another block of cards you’ll want to flesh out your collection. 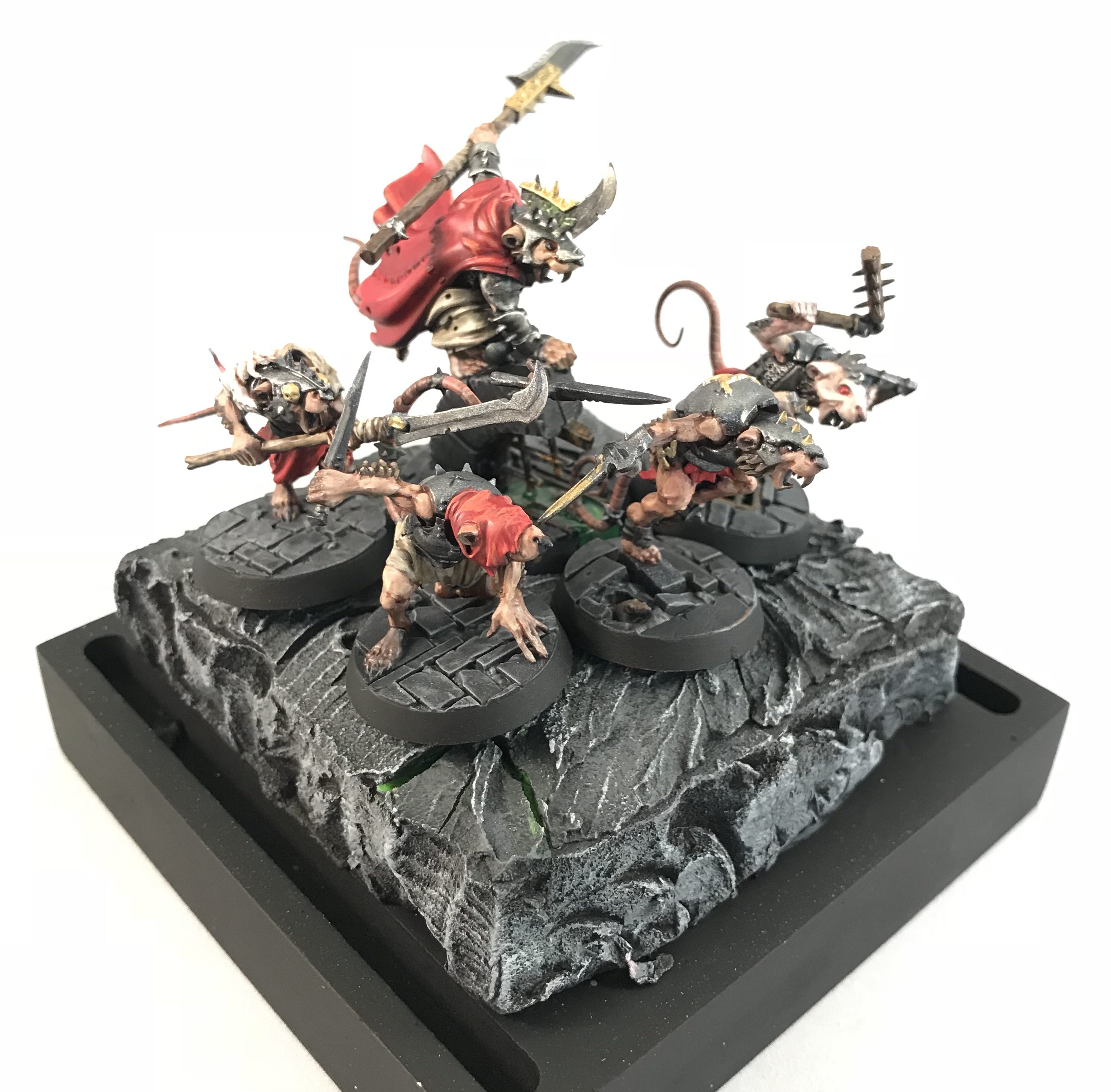 Where Fjul-Grimnir’s Fyreslayers advance across the board like an unstoppable tide of muscle and melee weapons, Skritch’s swarm of Skaven take a different approach. Skaven are the Warhammer universe’s rat-men and their battle tactics fall right in line. Skritch and his band are numerous, mobile, and feel like they’re coming at you from all sides. Boasting numbers and an ability to resurrect expendable units directly onto your opponent’s side of the board, this is a warband for players who like being adaptable and keeping their opponents guessing.

The Spiteclaw’s swarm is all about pressure. With the fastest movement in the game, almost all objectives and enemy figures are within their threat range at all time. They inspire if chosen by a ploy – yours or your opponent’s -which can make players reconsider their ploys. It’s often a no brainer to push a figure a hex as needed, but pushing one of these Skaven may mean inspiring them. That’ll put a pause into most plans.

Most of Skritch’s crew don’t deal a lot of damage in combat, but they’re sneaky and tough to kill. The cards they bring offer plenty of opportunities to move yourself or opponents around to leverage their numbers, and the ability to bring back fallen rats directly into opponents territory means that it can be hard to pin them down. That being said, it’s possible to upgrade these sneaky gits into giant killers. Skritch himself is a formidable combatant who can even attack at range. The Hungering Skaven has a great upgrade that boosts his damage and targets all adjacent opponents – even allies. 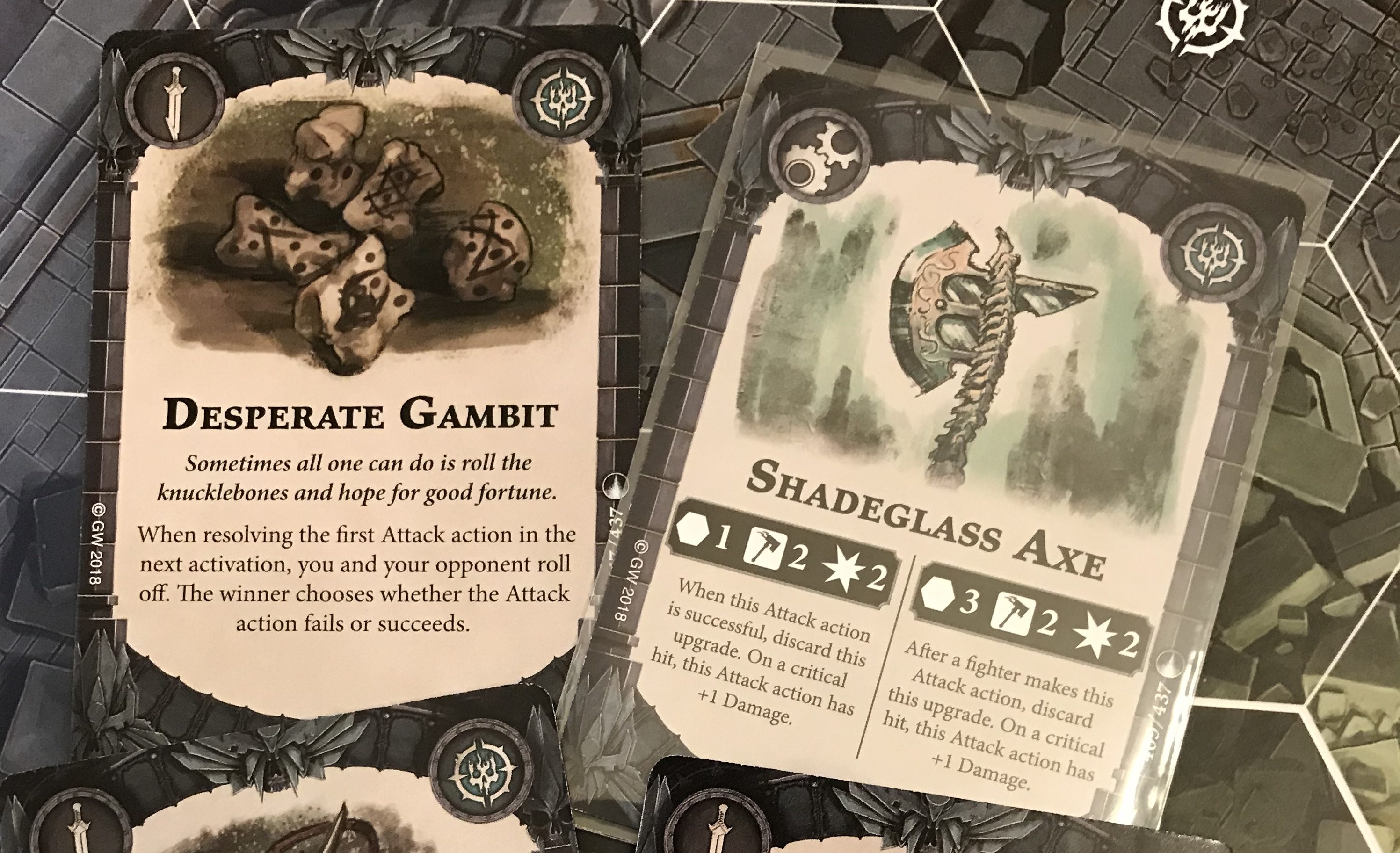 Warhammer Underworlds: Shadespire continues to impress. Spiteclaw’s Swarm threatens to unseat the Ironjawz as my favorite warband. Equally impressive is how these releases aren’t dominating the competitive scene. At a recent tournament I went to, victory went to the core set Stormcast who have kept pace with the new releases thanks to the universal cards included in every expansion. With the final two warbands on the horizon, we’re excited for Shadespire’s future.