Warhammer Quest Heads to the 41st Millennium in BLACKSTONE FORTRESS

It’s difficult to write about Warhammer Quest and not billow reverence towards the 1995 OG release. But we’re not going to do that here. Warhammer Quest: Blackstone Fortress stands alone. This is the best iteration of the system and it arrives wielding boltgun and power claw.

While I’m not going to talk about that initial release, I would be remiss not mentioning the two previous iterations of the rebooted series. This is because Blackstone Fortress is a confluence of both The Silver Tower and Shadows Over Hammerhal.

The concept is lifted straight out of the former. A coalition of thrown together pirates and commandos are entering an intrepid cavern (here, in the gullet of a massive interstellar ship). They’re a dirty dozen woven into momentary alliance in pursuit of fortune. This requires gathering clues to unlock progress and eventually storm the vault containing the wondrous archeotech murmured with tongue and dreamed about in mind. 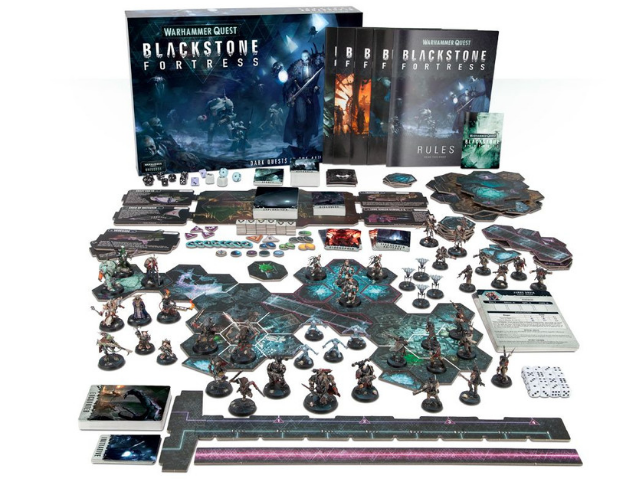 The casting is top-notch. By moving from Fantasy to the 41st millennium it’s taken on a new kaleidoscope of individuals. We have a Kroot scout with a long rifle, a rogue trader captain mouthing a cigar, and a female zealot wielding a flamethrower with a chainsaw bayonet. There’s even bizarre inclusions such a never before seen Imperial robot and the return of squats (in our hearts anyway, because they officially ratlings)  in a pair of fellas that combine to the functional equivalent of a single character.

These protagonists are beset on all sides by the a suite of new villains. You have creepy spindle drones scuttling across the floor, some oddball techno-bondage dudes called Negavolts, and a fabulous new selection of Imperial Guardsman devoted to Chaos. This means lots of spikes, gas masks, and raiding the costume set of Fury Road. All of these models are fully realized in push-fit minis that are simply superb.

But enough celebrating plastic, let’s get to the meat of this thing.

Calling Blackstone Fortress a dungeon crawl is a bit of a misnomer. It still feels crawl-ish but there’s a substantial shift in the format. Instead of pushing room to room and claiming each of grid with bullet and blood, you’re moving through a set of encounter cards and small skirmishes.

These encounters prominently feature combats that consist of setting up and then tearing down a set of rooms and hallways. They’re set battles that present tactical challenges and have you going up against multiple groups of foes. It feels more Final Fantasy Tactics than Diablo.

The goal in each fight is to search a scattered set of discovery tokens. This allows you to draw from a deck of cards that includes valuable artifacts as well as precious clue cards. These clues point towards the hidden archeotech vault at the core of the derelict ship.

Don’t fret, we still have interesting challenges such as those wonderful mini-dexterity games of stacking dice under time pressure. These crop up in exploration cards that feature grid-less tests of chance and fortitude. So after clearing out a hive of Beastmen you’ll move on to a card that has everyone in the group rolling dice and making a test to overcome an abstracted obstacle. Or maybe someone gets separated and has to fight a small isolated encounter. There’s strong diversity here and quite a bit of atmosphere.

All of this takes place in what the game dubs an ‘expedition’. These are sojourns into the Fortress where the group must work their way through eight randomized encounters, four of which are skirmishes and four of which are narrative challenges. In between each encounter you have the option to return to a nearby port city and lick your wounds. This is also where you turn in those valuable artifacts and then purchase equipment and upgrades.

This structure of bouncing between respite and procedurally generated challenges forms the identity of the game. It has a roguelike nature where you’re pushing against an oncoming storm and trying to hang on as long as possible. This is primarily accomplished via the legacy system.

Legacies are these bastard cards that must be drawn when you return to port. They permanently alter the game by introducing more difficult rules or causing you to shuffle a new enemy type into the deck. This is genius as a way to scale play over time and keep things small initially. As the adversary deck grows you will encounter new foes and face new difficulties.

Balance is unusually strong for this type of design as well. The scope of power is constricted somewhat due to the surprising decision to nix character growth nearly completely. Items you gain are mostly disposable and the only improvement you see is through an inspiration mechanic cribbed from Shadespire. Here, you flip your character sheet once you’ve accomplished a certain goal or gained enough inspiration through defeating foes. Your stats will improve and abilities grow stronger, but it will all reset once you end the expedition and catch some R&R.

This works incredibly well as a carrot to fuel your progress. It contrasts sharply with the wound system. Your characters will become battered over time and will accrue grievous injuries which can only be healed upon returning to your temporary home. This push and pull creates a level of rising tension that fuels dramatic action and agonizing die rolls. It’s simply wonderful.

While Blackstone Fortress maintains the slick core dice activation system of its progenitors, much of the surrounding circus is wholly unique. As you push through encounters and amass clues, you will eventually assault the bastions protecting the inner vault. Each of these fortresses includes a pre-defined layout and special rules. Only once you defeat all four can you launch your final siege upon the heart of the beast. Taunting your progress is a special sealed envelope that may only be cracked upon securing your victory. Fortune favors the bold.

Blackstone Fortress gets so many things right. The AI that controls each enemy is unpredictable and exciting. Player actions are swift yet full of color and identity. Skirmishes are vibrant and prove a dynamic tactical grinder.

The only faults I’d pin on this beauty are primarily centered around that commitment to balance. By stifling long-term character growth, the game loses a bit of its appeal over the long haul. It will take a half-dozen or so sessions to complete this sucker, and fatigue may set in if you push too hard too fast. That lack of growth and the reoccurring structure of bespoke skirmishes can prove monotonous when play is condensed over a short period of time. This is one you want to let burn slowly, returning to the fortress every few weeks or so until its eventual fall and your ensuing triumph.

That statement of this being the strongest iteration of Warhammer Quest is not made lightly. This is a series full of nostalgia and majesty. Most of my emotions are tied to a vision of fantasy and the Old World, and I’m utterly shocked that the shift to the 40k universe resulted in a production that achieves such excellence.

Are you excited for Blackstone Fortress? Let us know in the comments!