Want to Learn How to Swordfight? Here Are Some Groups That Are Ready To Teach You - Nerdist

Want to Learn How to Swordfight? Here Are Some Groups That Are Ready To Teach You 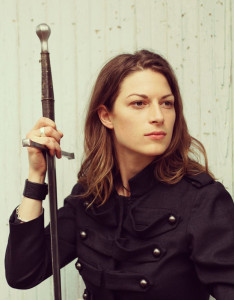 Fantasy worlds like like the ones found in Game of Thrones, World of Warcraft, Legend of Zelda, and Lord of the Rings have inspired role players and cosplayers for years. The image of our hero facing off against seemingly insurmountable odds armed with nothing more than their trusty sword is a powerful symbol of strength and courage. If you’ve ever wanted to learn how to fight with a sword, we’ve got good news: now is a great time to try it out! Not only are there a variety of organizations and levels of involvement, but there are also some great role models out there.

Samantha Swords is a well known sword-fighter who has worked with Weta Workshop since 2008 and has been a part of film productions like The Hobbit, The Chronicles of Narnia, and Warcraft. She has also run educational programs for children, acted in short films, and done work with the Vancouver Tactical Training Centre. How did she start her career of badass sword fighting? Just like you; with an interest in fantasy.

Samantha says “I was always passionate about swords from as young as I can remember. Mum encouraged it and actually made me my first sword when I was four! My passion didn’t go away as I got older and was certainly fueled by me being a fantasy/adventure geek–into Narnia, Tolkien, Baldur’s Gate, and anything to do with knights, dragons, or pirates. ”

“When I was 19, I was doing some research on the Internet and somehow came across the term ‘Western martial arts’ which really blew my mind. It was the first proof for me that medieval swordsmanship was sophisticated and nothing like what’s depicted in film or games. I discovered that it was artful and complex, and I was hooked.”

So how does someone get started? In Samantha’s case, she sought out any instructors she could find. “It took me a while of trying different groups, but eventually I found very good teachers that fit my needs,” Samantha says. She believes that anyone can learn and that you can get a lot more out of the training that just self-defense. “I barely recognize myself from the scrawny, socially awkward, artistic kid I used to be. I really relate to people and different levels of training and feel that I wouldn’t of grown this way if I hadn’t been completely dedicated to improving as a swords-person. When I’m talking about swords to people, it’s very important to me that I make it approachable because I was not always athletic, or interested in surviving violent confrontation! I want to swords to be accessible and fun for people, not threatening in anyway. I think that there are so many ways to grow and everyone’s journey is different.”

It’s easier than ever to get involved in any one of the many groups that instruct in sword fighting, since they can now be found online and have grown from small clubs into large international organizations. Here are some amazing groups to get you started:

The Society for Creative Anachronism (SCA) does reenactments set in the European middle ages and renaissance period. Not only do they teach sword fighting and other European martial skills, but costuming, arts, horseback riding, and heraldry as well. The SCA has chapters throughout the United States and all over the world. You can locate your closest chapter on their website.

Historical European Martial Arts Alliance is focused mainly on styles of fighting recovered from historical combat manuals circa 1300 to 1800. This style is much more about technique and offers classes by certified instructors. You can learn more by checking out their website or Facebook page.

The Armored Combat League is probably the most intense of these four group and offers full contact steel fighting as a sport.

It’s obvious that Samantha is passionate about sword-fighting and it’s great to see that the art is becoming more popular and welcoming. So, don’t be shy! If you are interested in learning more reach out to your local groups and see what feels like a good fit. Many of these groups will become more than just your training crew; they become your family and friends.

Which fantasty weapons would you love to learn how to fight with? What groups do you know of in your area? Share with us in the comments below!