Vanquish Steelheart and Save Newcago in THE RECKONERS - Nerdist

Vanquish Steelheart and Save Newcago in THE RECKONERS

Imagine if tomorrow a bright red light appeared in the sky, and people started developing superpowers. Pretty cool. right? Something similar is the beginning of many superhero stories or worlds; that’s exactly how it works in The Reckoners, a novel series by Brandon Sanderson. However, the world of The Reckoners has a catch. Those who gain superpowers fall to evil. All of them. It’s a world of supervillains, not superheroes. City by city these supervillains – known as Epics – take over the world and subjugate the ordinary citizens. It’s up to those citizens to fight back.

How do you fight supervillains without powers? That’s the tricky part. Sanderson’s novels tell the story of a group of regular humans known as The Reckoners. They’ve banded together to fight the Epics. Along with superpowers, each Epic gained a critical weakness. Exploiting that weakness gives The Reckoners a way to fight back. This is captured in The Reckoners board game, a Kickstarted game from Nauvoo Games that is now hitting retail shelves. You and your friends band together to defeat Epics and take down Steelheart, the evil ruler of Newcago. 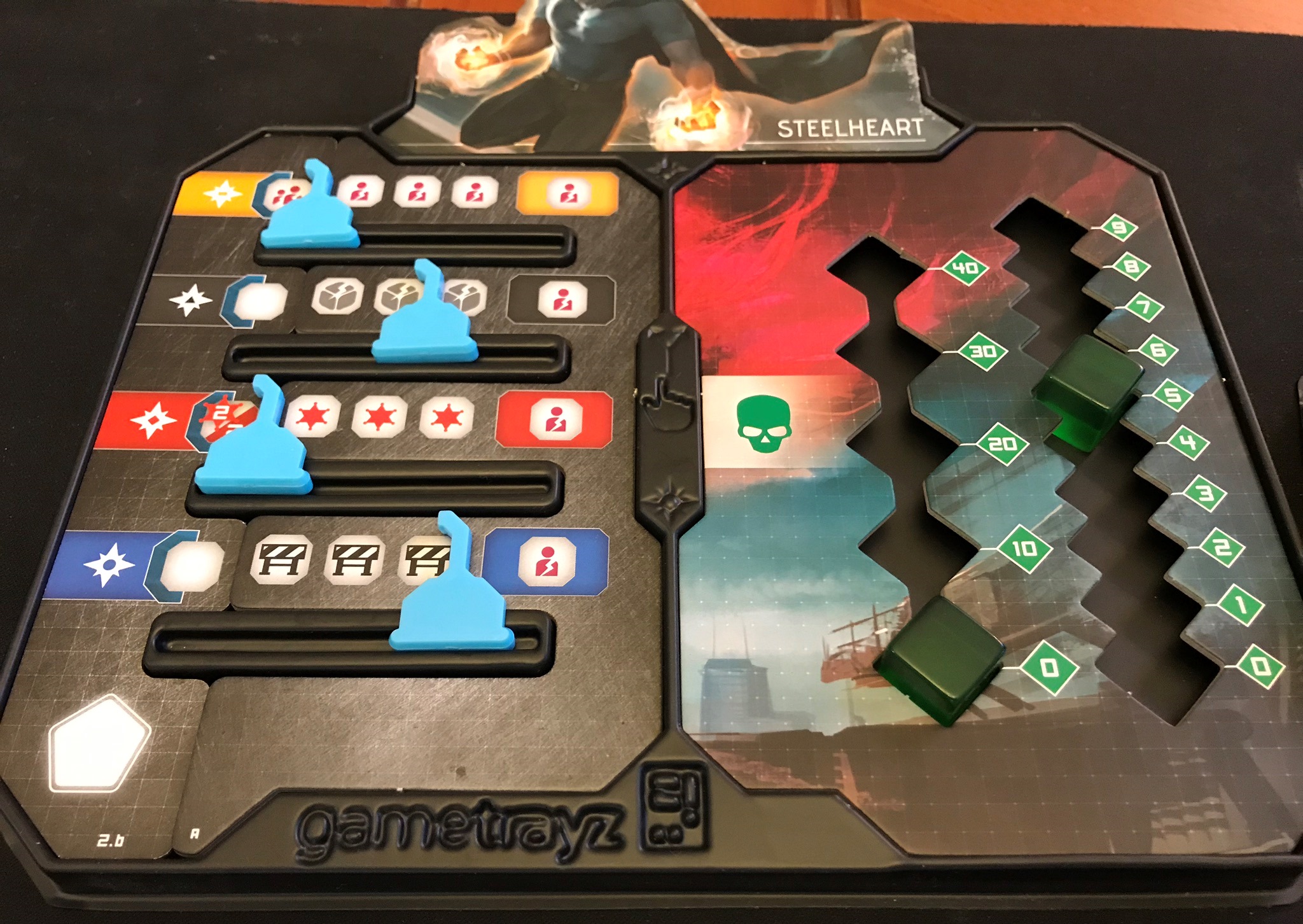 The Reckoners is fully cooperative. No traitors or independent win conditions here. You’ll all win together by first researching Steelheart’s weakness and then launching an attack to take him out. If you can take him out before he and his Epic minions kill too many civilians, you’ll win. That isn’t as easy as it might sound. The city of Newcago is full of Epics and it’s impossible to focus your attention only on Steelheart. It’s a delicate balance. Vanquishing the other Epics will help you in your fight against Steelheart, but focusing on them too much will let Steelheart gain an unstoppable level of power.

All Epics, including Steelheart, have both a Research and a Health track. Many of the Epics, also including Steelheart, must have their weakness successfully researched before they can be damaged at all. The core gameplay of The Reckoners involves a lot of dice rolling. Each Reckoner has 3 colored dice that have faces unique to their strength. Some do extra research, others are better at containing Epic’s power level, and a few other things. They also have an additional 3 generic dice that feature all possible symbols.

Players all take their turns simultaneously. You’ll roll all of your dice, decide whether or not to keep some, roll the remaining, and repeat for up to 3 rolls. The goal is to acquire the symbols you need to accomplish your short-term goals. Research symbols help uncover Epic weaknesses, combat symbols deal damage, and money can be hoarded to purchase powerful upgrades. Any dice can be used to move around the city, which is important because you can only engage with the Epics at your location. Newcago is full of villains, each impacting the game in different ways. 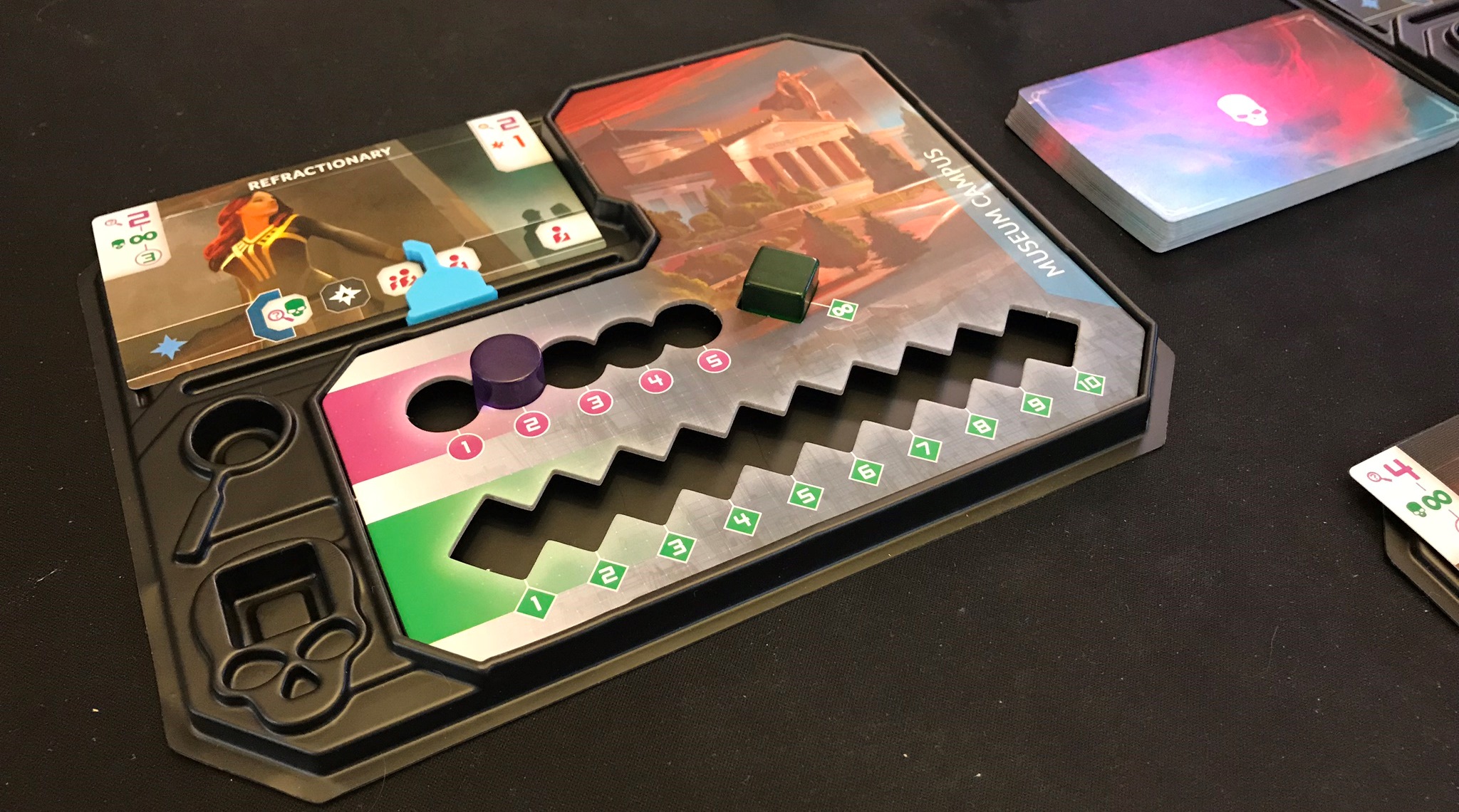 This system of rolling dice and using symbols isn’t new, but what’s fresh in The Reckoners is how open this phase of the game is. All players act simultaneously, but you don’t have to do your rolls at the same time. You can pause at any moment to let your allies finish their entire rolling sequence before deciding what to keep. Perhaps the player controlling Megan rolls a handful of Combat symbols and knows she can put a hurting on the Epic at Navy Pier if someone else can finish researching their weakness. In another game, she may have to decide then and there to bank those symbols and hope someone else rolls well. In The Reckoners she can wait to see how everyone else finishes their rolling before deciding how many of her combat symbols need to be rerolled.

Similarly, there is no strict turn order for activating your dice. You can alternate back and forth across all players, moving around and splitting your turn as necessary. This openness does come with the potential to get bogged down in plotting out the communal turn like a giant puzzle, but it brings with it a flexibility that I really enjoyed. Given how difficult The Reckoners is, it’s also nice to have this tactical flexibility.

It’s also worth noting the high production value of this game. Nauvoo Games partnered with Game Trayz and they lavished their attention on every last ounce of The Reckoners. Each location has its own plastic insert tray to hold cards and bits. Each Reckoner also has their own, with spaces for dice and an organizational system to help with your rolls. Once you unpack your copy and load everything into its proper place, game set up and break down become a breeze as you just lay the trays out on the table and get to rolling.

The Reckoners plays out like a giant puzzled-based fight against super villains. The Epics keep on coming, and Steelheart is always moving around the board wreaking havoc and fighting back. Each round requires dealing with the immediate threat of Epics, while investing in your own equipment and abilities so you can take down Steelheart. With expansions already in the works, it’s safe to say that The Reckoners will follow the path of the novels and continue telling a great American Supervillain story.