Trench coats and sunglasses-at-night become fashionable again throughout the nation this summer. The organization known as the Mind’s Eye Society (formerly known as The Camarilla), the LARP community of White Wolf begins it’s new 2017 chronicle this summer. If you are looking to get your night-time kicks of being a vampire, werewolf, or changeling… now is a good time to poke your head in and see what’s new. Don’t worry, killing the Prince is always in season.

So what the hell is it?

Society has been around since 1992 in one form or another. It’s the official fan organization for White Wolf studios and did its fair share to help build the undead larping community throughout the ‘90’s. In 2010, it underwent a name change to the MES and became an official non-profit organization, but still maintains close ties to its parent organization as one of their sponsored clubs.


Every four years, this organization with membership in the thousands, all agree to reset the chronicle and start anew. Allowing the organization to evolve and adapt based on the merits and flaws of the past chronicle. In addition to finally retiring those long-beloved experience hog characters. It has now grown to an organization that helps put both large-scale events (like this year’s Tampa by Night (in Florida) and smaller local games right in your backyard. But no matter which you attend, your characters exist in the larger world. An action you take in Chicago, could very well impact people in Texas—for better or worse.

Reset you say? But our XP!

The focus of this new 2017 MES chronicle is about inclusion and recruitment. It has markedly different rules—the entire chronicle is based off the newer By Night Studios line of products. For either Vampire: The Masquerade or Werewolf: The Apocalypse, and the entire World of Darkness cannon setting, has lurched forward out of the old gehenna days we’ve played in for decades. The new rules set are simpler, faster, and designed for social live action play. For the MES; they’ve trimmed their cannon down to only a handful of documents for each group. This way, new players won’t have to feel drowned by twenty years of lore.

“This upcoming chronicle represents a first for our club—it will be a chronicle based entirely upon the Jyhad (the eternal struggle for power between vampires) instead of a Gehenna Chronicle (wherein the game is about stopping the end of the world). Clan rivalries, sect rivalries, and interpersonal rivalries are all going to be the focus of the game, so there will be way more social/political RP and less ‘Vampire Dungeoneering’ as we’ve seen in chronicles past…” -Jennifer Brazas, Domain Coordinator of Chicago.

To help create this feeling of “being connected” and create more social and political plots, a new concept is being rolled out within the MES. Using its national player base and to foster ties for new players, they’ve created the Lineage Project.

“The Lineage Project is designed to provide the players of the 6th Generation PCs and the players who portray their descendants with a direct tie to the back story of the Chronicle while connecting them to the National Plot. But the goal is essentially to create a mini game within the game, to give players goals and tasks, to promote the themes of the setting, etc” – Stacey C., aNST Chief of Staff for the Mind’s Eye Society.

This translates into you and your friends, coming up with a lineage of descendants, and submitting it for approval. Or, you browsing the list of lineages looking for players to join them! Either way, if you are an old veteran, or new blood—you’ll have a gateway into the chronicle and an in-character team of people to help you. Since they will be scattered over the country, you’ll instantly have a “larger than my backyard” feel.

“… From a personal point of view, I feel like it helps players getting ties and involved outside of their local domain’s easier. It helps people like me (who finds the task of filling out a timeline grueling) because you have a whole family of people—from other player Sire’s to Childer’s bouncing ideas off of.” -Erin DeMoulin-Stratton, aRC of Communications. 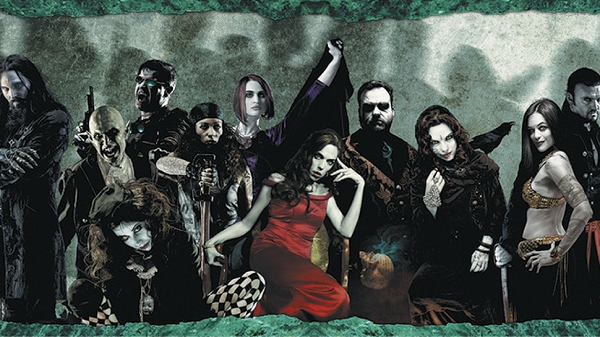 There are many organizations out there to get your local LARP on with and friends to make. From One World By Night, Underground Theater, and even the crazy immersive Nordic LARPs; each offers it’s own unique style. But a Chronicle reset is the perfect time to hop for new players. You can find all the information you would ever need on their official website.

Have you played in MES before? Tell us some of your stories! Or if you have a local venue starting up this summer to launch the new campaign, post in the comments below!