Vampire Hunter D Paving the Way For the Future - Nerdist

Vampire Hunter D Paving the Way For the Future

Recently, we posted an article on the Vampire Hunter D (VHD) Kickstarter which is helping create an American comic book based on the series as well as an RPG supplement for Pathfinder. VHD, created by Hideyuki Kikuchi, is a rich and fascinating sci-fi vampire tale told in Japanese books and anime.

The Kickstarter is focused on creating a series of comics based on a short, unpublished story called Message from Cecily. Kurt Rauer and Scott McLean, of Unified Pictures, were kind enough to sit down and explain in more depth, how this simple project may help open some doors for roleplaying, television, movies, and more.

The kickstarter is releasing a Pathfinder supplement with the help of Paizo, the company that produces the RPG series. This is the first time VHD will be officially represented in a roleplaying supplement and depending on how the fans respond, it may be the only time. According to Kurt, “The game tie-in (Pathfinder supplement) is something that has taken us a little bit of time to explain to the Japanese. They don’t do the same kinds of gaming that we do here. The universe that Kikuchi has created is so deep, it lends itself incredibly well for this. But they’re not used to the idea of pencil and paper based RPGs.”

“One of the things of why we want to do this kickstarter with the Pathfinder supplement,” says Scott, “is that if you’ve got somebody who doesn’t understand something, that’s not in their county in their language, that you see a lot of, but it’s a way to show ‘hey this is something that your fans in other countries are really interested in. We wanna help supply this.’  So doing this helps us show in numbers, that this is something that your fans do want and will be enjoyable for them to get to bring into their hobbies.

This project is a major step in the right direction for anime and manga to begin being represented in roleplaying games. Kurt said, “As we produce the rest of the comic series and into the television series, I think that we’ll help open some doors for us and for them. It’s a two way street. The digital frontier relationship is very good. … Having them grow outside of those boundaries is where the excitement comes in both for us and for them. Mori, one of our sequence directors in Japan, grew up on it; has read all of the novels. I think he’s looking at it as a way to tell a broader audience the stories that he loved.” 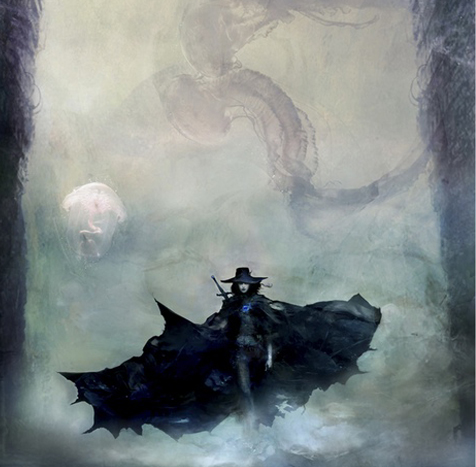 With the conclusion of the campaign, Unified Pictures and Stranger Comics will be able to not only finish one comic book, but create a series which will help tell the story of Vampire Hunter D to a new audience. The number of backers and future readers will go a long way in convincing companies like Amazon and Netflix that the VHD tv show is a worthwhile investment and Unified is hoping to be able to produce around 8-10 episodes a year of a one hour animated drama.

According to Kurt, “The comic allows for us to build a substantial audience in an authentic way and give them a sense of what the stories will be later on in either additional comics or into the television show.”

The Kickstarter will be shipping out to backers sometime in the end of September by the beginning of October. Although Kurt stated “Certain tiers will be seeing it sooner than others simply because the printing come back to us very quickly. Things that have to go to Japan and back, that’s a whole other matter, seeing as how some of the 3D prints will have to go very carefully wrapped.”

We’re really looking forward to how it all turns out in October! Thanks again Kurt and Scott for taking the time to give us a peek behind the curtain of creation. Will the VHD Kickstarter change the face of roleplaying by showing Japanese companies that we want anime and manga based RPGs? We will have to watch the results to find out, but in the meantime the project is providing us with an awesome comic series while laying the groundwork for the television show and perhaps a movie in the future.

You can lean more about the project and contribute on the Vampire Hunter D: Message from Mars Kickstarter or check it out at Stranger Comics and the Unified Pictures.

What animes would you like to see turned into RPGs? Let us know in the comments below!