Imagine a board game with Dungeons & Dragons’ role-playing, the hexagonal grid customary to tabletop wargames, and the capability to accommodate sixteen players. I know, I cried too. It’s the gaming version of the ideal romantic partner, and it really exists. Well, it existed, anyway.

Magic Realm was first published by Avalon Hill in 1979, just a few years after D&D co-creator Gary Gygax developed the medieval miniatures wargame, and precursor to D&D, Chainmail. Avalon Hill has since become a subsidiary of D&D publisher Wizards of the Coast, itself a subsidiary of Hasbro. Its name is now associated with such strategy games as Risk, Diplomacy, and Axis & Allies, as well as the horror-filled Betrayal at House on the Hill. In hindsight, Magic Realm sounds like a marriage between D&D and the elements of Chainmail that made it such a complex wargame.

A second edition of the game, which altered the rules and gameplay somewhat, was published in 1986. Due to Avalon Hill’s absorption into Hasbro’s multi-headed conglomerate, however, Magic Realm has been out of print since 1998.

Why am I writing about this, then? Why should you care? Because chances are you’ll love the idea of this game, and chances are you’ve been playing some version of it in many of your tabletop gaming staples. Plus, the Sorcerer on the cover looks uncannily like Saruman, complete with spooky talon-fingers. 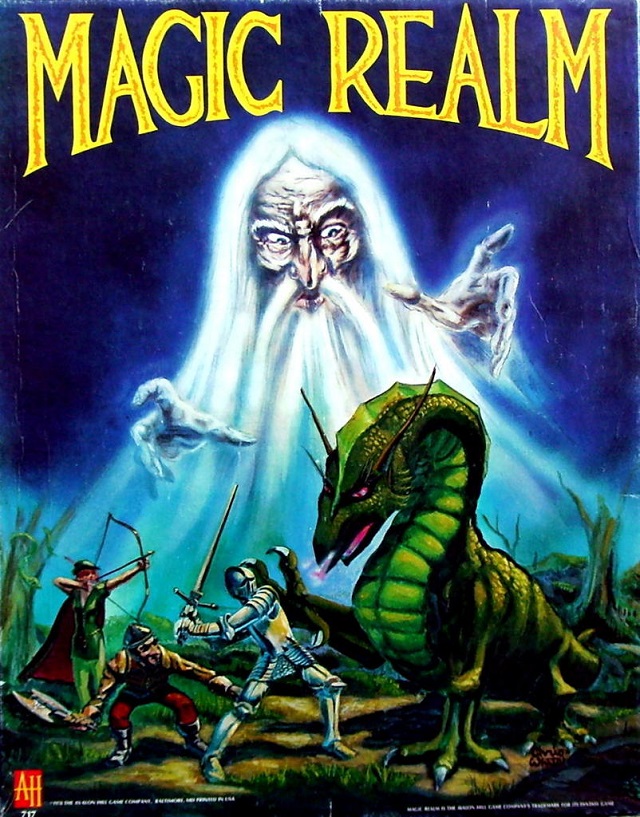 Magic Realm transported the player to exactly that: a magical fantasy kingdom, now laid to waste and crumbling in ruin, overrun with monsters and inhabited by precious few native to the land. The players insert themselves into the narrative as ONE OF SIXTEEN adventurers hoping to take advantage of such a blank canvas. One key difference between Magic Realm and Dungeons & Dragons, aside from the existence of an actual board, is that Magic Realm has no game master. There are simply the adventurers and the world provided in the game.

Even though the game supports sixteen players, those familiar with the mechanics recommend no more than eight, with three to four being the optimal range. If you can gather sixteen of your closest friends together, that might alter the game’s playtime from four hours to something more akin to a weekend. 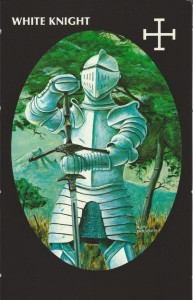 The playable characters are genuinely unique, too, among the sixteen being adventurers such as Amazon, Black Knight, Pilgrim, Swordsman, White Knight, Witch, and Woods Girl. Each character has his or her own strengths and weaknesses, of course, as well as his or her own allies and enemies whom the party may encounter in game.

The general aim of the game is to reach your personal chosen victory condition, achieved through battling monsters, exploring the land, and finding treasures. Magic Realm has treasures that act as combat boons or character boosts, as well as treasures that hold a purely monetary value.

The physical board is created by assembling a variation of double-sided hexagonal tiles, thus leaving the game open to nigh endless gameplay possibilities. The tiles are placed such that the paths connect, much like in Carcassonne, but every game features a completely different terrain layout. Taking the time to set up the board can be a grueling task for a newcomer, and assembling the treasures randomly, face-down, and hidden can also add a bit of time to setup.

On any given tile is a random assortment of monsters, spells, or treasures that the players can encounter. If you’ve ever played Fantasy Flight’s Mansions of Madness, Magic Realm‘s treasure setup is somewhat similar to Mansions‘ except with a randomized distribution of items and tiles instead of a distribution preordained by the story. 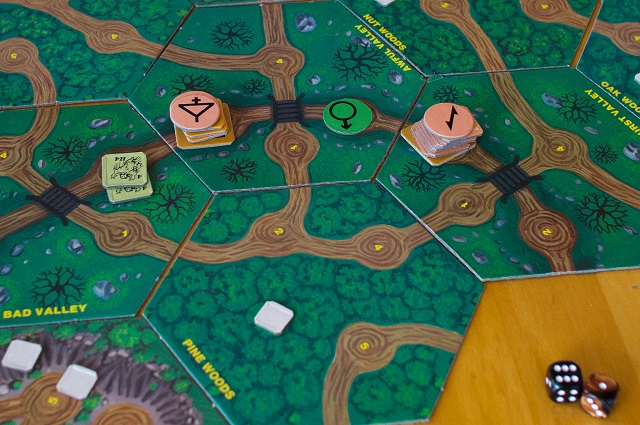 Despite the attractive concept of the game, Magic Realm inspired and continues to inspire some trepidation due to its rather incomprehensible first edition rulebook, made only slightly more comprehensible in the second edition. But once you can master the rules (or maybe have a wavering grasp of them), the actual gameplay is not as daunting as it may initially seem to be.

If you have confidence in your ability to decipher novel-length rulebooks, have a gander at this long list of Magic Realm resources and jump waist deep into the twenty-odd steps and sub-steps for combat. I’ll give you a little taste now: there are specific rules for inflicting harm based on an attack’s time and length, and any bystanders in the area must either have their loyalties snatched up by players or be randomly assigned a target to attack before combat can begin.

Due to the game’s cult status and its gaining traction over the years, many fans have made efforts to unearth the ruins of this lost Magic Realm. While some have taken the initiative to reformat the second edition into an unofficial “Third Edition” of the game, attempting to clear up the ambiguous rules, others have created websites and applications to make the game available to anyone interested in playing now.

RealmSpeak is one such application that enables the user to host a live, online game of Magic Realm with up to sixteen people. Of course, the complexities of Magic Realm make it necessary to own a copy of the game and familiarize oneself with the rules before stampeding into an online forum.

Would you want to join a campaign to bring back Magic Realm, or should it remain hidden? What other gaming gems are no longer in print? Let’s talk about it in the comments.