Travel Ancient Lands in the MAGIC: THE GATHERING Board Game HEROES OF DOMINARIA

Magic: The Gathering is a big deal. You know this, I know this; it’s a truism plain and simple. Thus, by extension, Magic getting a board game is likewise a significant event. This isn’t the first time Magic leapt from cards to board: Arena of the Planeswalkers, a spiritual successor to Heroscape set in the Magic universe, received praise from critics before excess stock was shoved into presumably another plane.

Wizkids’ Heroes of Dominaria is an entirely different entry into the tabletop market, however. This a proper board game with cards, chunky wooden components, and of course a board. Players take on the role of a familiar hero in a Euro-style adventure game of travel and discovery. It’s a blend of genres that features resource management as you gather and spend mana turn to turn.

This is a competitive game which makes it a bit of a race. You push into different regions of Dominaria with the intent to amass specific mixtures of resources so that you may complete quests and construct Manaliths. There’s some engine building going on as you remove components from your playmat and place them on the board. You are rewarded for doing so with an escalating set of point values and boons. 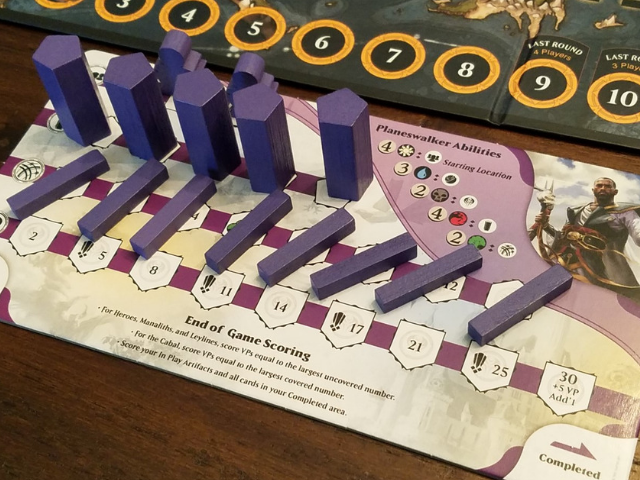 Much of what you build will aid in the gathering of mana. Elongated wooden planks can be placed to connect locations, allowing you to build routes of sorts that you may reap from. Manaliths generate the precious power on their own, acting as massive energy sinks to gather your strength. Both of these minimize your reliance on moving your adventurers about the board and instead allows you a strategic vector framed around infrastructure.

All of this is performed in service of quests. There are straightforward and steady ways to earn points–such as throwing out leylines–but the quests offer the big swings. They take the form of cards held privately in your hand. When you attain new ones you will draw two and choose one to keep, allowing you to tailor your objectives around strategic choices you’ve already committed to. Occasionally you can even luck into two of the same quest, which can feel a little dirty as you scoop up big pointage due to sheer luck. 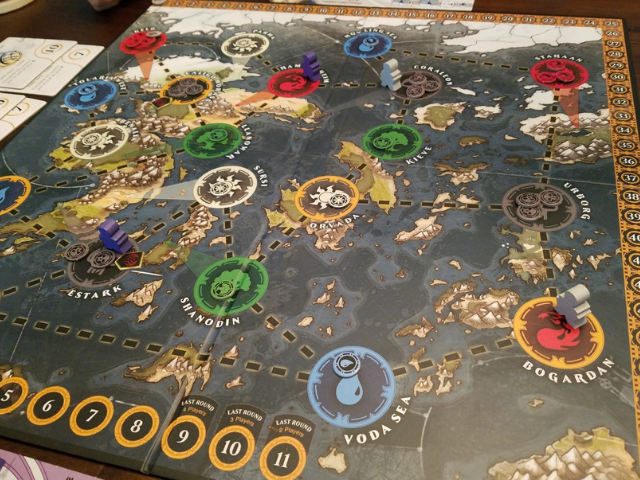 The experience sums up to a light efficiency game about maximizing actions and securing points as fast as possible. Pressure is applied from fellow players racing the clock. There is very little interaction in the game, solely existing through scooping up the randomly placed mana before an opponent can grab it.

Heroes of Dominaria as a whole lacks teeth. This may be a disappointment for those seeking conflict or negotiation, but it’s a boon for the crowd that desires a pleasant adventure of gathering power and executing an unobstructed strategic plan.

It also clocks in at a strong 90 minutes. It doesn’t overstay its welcome or become repetitive too quickly. At a count of two you may even be lucky enough to finish within an hour, offering a brisk calculated exercise of cognitive challenge. 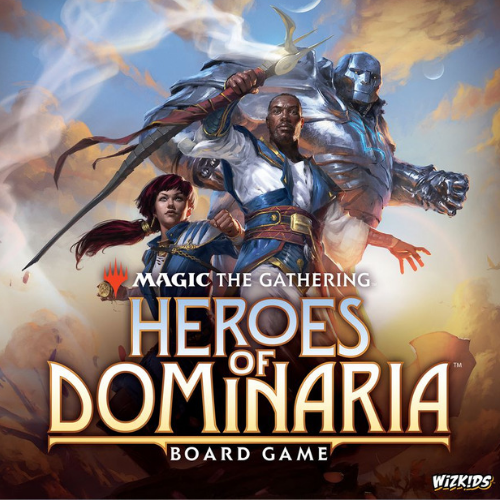 The game as a whole feels a bit like a less dramatic Catan with a dash of Euro-style adventure bolted on. As such a blend it’s pretty smooth and is easy to grok immediately upon explanation. There’s a heavy sense of streamlining as the heroes are symmetrical and all of the actions revolve around the mechanic of very basic spending of different resource types. This dedication to straightforward gameplay results in any sharp edge of personality sanded off, but it also is responsible for the ease of use and rapidity of the affair.

It’s about time is all I can say in terms of Magic: The Gathering finally receiving a suitable board game. Heroes of Dominaria succeeds in presenting a streamlined offering that would appeal to a wide range of gamers. It’s not overly complicated or bogged down in excess, and it’s sure to appeal to the Magic die-hards looking for another glimpse into this magical world.

Are you excited for Magic The Gathering: Heroes of Dominaria? Let us know in the comments!