It was only a few years ago that Czech Games Edition (CGE) released Codenames. To say Codenames was a smash-hit is an understatement. It’s a fantastic game and requested at every one of my family gatherings. However, this holiday season, CGE has Trapwords for us and it’s already cementing its own place on the table.

Trapwords has taken the core of the classic game Taboo and improved the formula. If you’re not familiar with Taboo, here’s the basic rundown: teams are competing to guess the most clues. Cluegivers must describe a word without using any of the “taboo” words. For example, you need to describe “bacon” without saying pig, eat, breakfast, sausage, or eggs. If you mess up and use one of those words, the opposing team gets to hit the obnoxious buzzer and your turn ends. 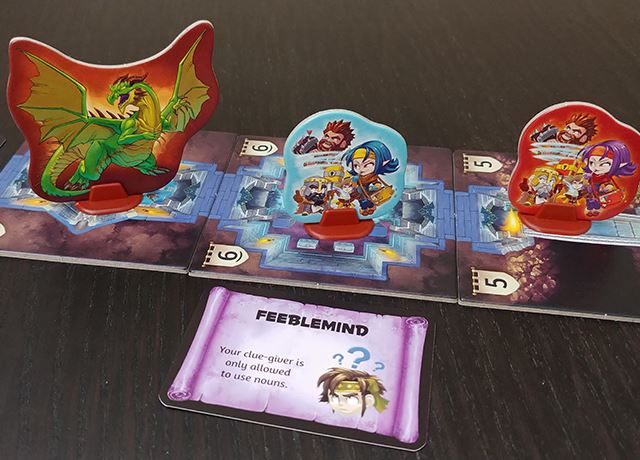 Other than the dungeon-crawl theme, the tweaks that Trapwords makes to this formula are few in number, but big in impact. First and foremost, the opposing team gets to create the list of “taboo” words. Though teams can write up to 10 “traps,” they must winnow it down to the number indicated by the other team’s position in the dungeon. Thus, the further you progress in the game, the more traps there are. However, being that they are called traps, the cluegiver isn’t aware of what words have been chosen. Giving clues becomes a cautious tip-toeing around words as you aren’t quite sure what you can and can’t say. It’s a minefield and you’ve got to talk your way through it in a very limited amount of time. It sounds like an impossible task, but you quickly adapt, learning to talk about things in some bizarrely effective ways. It turns out that the clue “blowing on a stick to make pretty” will actually get your teammates to call out the correct answer of “flute”. My teammates got the enthusiastic high five they deserved after that one.

While talking around a clue is an important part of the game, you soon realize that there’s more to it than just using round-about terms. Thinking about how someone might describe a word, outside of the obvious descriptors, adds a second layer of game to Trapwords. It only takes a short time before everyone realizes that the game is less about free-associating words and more about the double-think mind game that emerges. This is only improved when players know each other. My mom adorably makes a point to make sure she knows who is giving the clues, so she can tailor the list of trapwords. After catching on that I was saying “creature” in lieu of “animal,” I was immediately (and obnoxiously) buzzed in a subsequent round for using that exact word. 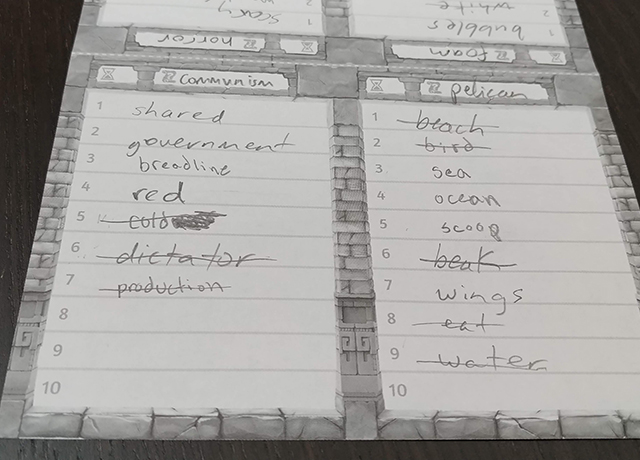 With each correct guess, teams move forward in the dungeon, increasing the number of trapwords the opposing team writes for them. Instead of keeping track of points, Trapwords opts to make the goal of the game to defeat the monster at the end of the dungeon. Once you move into the same room as the monster, a condition indicated by the monster’s card is in effect. For example, the Troll makes it so the cluegiver cannot say more than 10 words. While a bit gimmicky, the added challenge ends up being an entertaining culmination to the game. And if you’re getting extra good at the art of subtle communication, each of the five monsters come with a more difficult version of their effect.

There is also the option to play with curses, which trigger only the first time you enter the room. Like monsters, they cause some kind of effect like the “Phantasmal Snake” which does not allow the cluegiver to say any words that begin with “S” or the “Flood” which forces the cluegiver to give the whole clue in just one breath. Curses add some silliness to the game, which I’m not always in the mood for, but thankfully they’re entirely optional.

I tend to pick and choose my monster and curses based on the group I’m playing with. Similarly, you have the option to play with normal or fantasy words. You can also choose the room tiles in your dungeon, giving yourself fewer or more traps to dance through. No matter what you decide, the great thing is that none of this ever affects the overall enjoyment of the game. A maximum of eight rounds guarantees Trapwords never outstays its welcomed, but if your family is anything like mine, I doubt just one game will be enough.

What are your family-favorite games? Tell us in the comments!

DICE THRONE Is What You Get When You Mix MAGIC: THE GATHERING and YAHTZEE