Throw Dynamite in a Box in 'Boom, Bang, Gold' - Nerdist

Throw Dynamite in a Box in ‘Boom, Bang, Gold’

This was my initial reaction to HABA’s Boom, Bang, Gold, and it was for good reason. This game has rules – ones simple enough for a seven-year-old to grasp – but more importantly, it has a genuine gimmick.

The idea is that we’re miners heading into the dark aorta of the mountainside to excavate gold. We count to three and then each of us tosses a little wooden stick of TNT (complete with cloth wick) forcibly into the box. The false bottom inside ensures the surface is lively and full of bounce.

This box is full of face-down tokens. Many have images of gold nuggets on the backside, many show nothing, and a few more offer annoying critters such as bats and rats. The force behind our lobbed explosives should cause a number of these tokens to flip and reveal themselves in the pile of chaffe. Immediately after tossing the dynamite we can start rooting around in the box, grabbing a single token at a time with only one of our hands. Golden nugs are scavenged and placed on our personal player mat as we hurriedly attempt to outrace the opposing miners and locate the wealth.

This occurs over several rounds until we tally the final scores and declare a top miner. At this point, we can ice our throwing arms and let the smiles on our faces relax a tad.

Boom, Bang, Gold is simple. Everyone gets it. While there is a bit of a grey area and some adjudication needed when two players grab the same token or a piece of gold is propped up on its side, this is not the type of game you’re going to haggle over rules interpretations or strictly enforce edge cases. It’s a mad grab where you’re less concerned about structure and organization and more worried about beating that other stiff to the treasure. 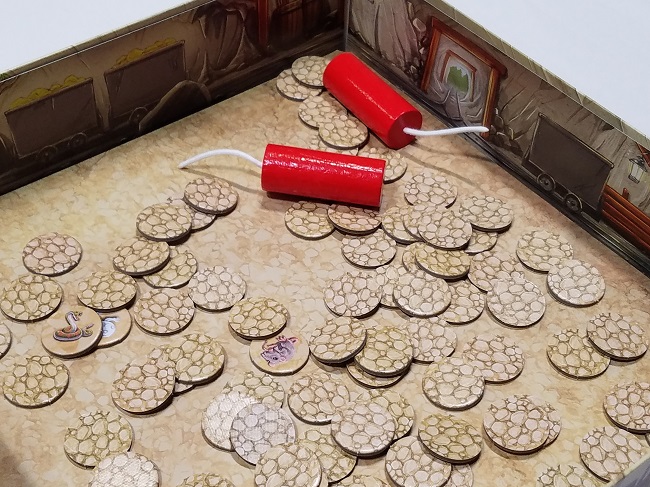 Despite the overall simplicity, there is a bit of spice found within special ability tokens you can dig out of the shaft. These can give you a second throw of the TNT or even cause opponents to discard their fool’s gold – a second type of valuable with a different coloration.

The final type of token are the vermin kind. Each character is immune to one type of critter and they are able to root them out and chastise them for their filthy existence. If you spot a token bearing your anti-spirit animal, you can shout out to the group and let them know.

Then the others at the table must immediately stop their digging and perform a special routine. The snake for instance makes others clap twice and then hiss, because that’s what snakes do.

There’s nothing quite like wandering by a table and seeing three grown adults waving their hands above their heads like Johnny Depp to shoo away invisible bats. It’s downright hilarious and not just for those on the sidelines.

This is one of those games that people can spot across a room and it will leave their head tilted sideways. You can’t really ignore it and the presentation coupled with performance is enough to bring anyone to the table. 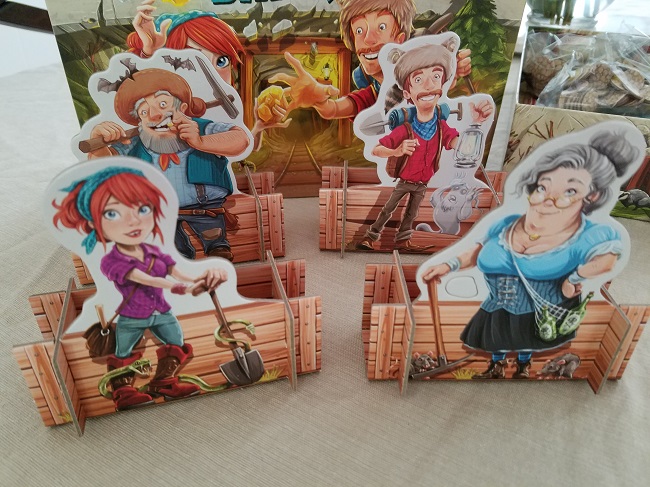 That’s basically it. This is a design that rides its gimmick into the ground and it manages to do so successfully. It hits its stride with a group of mixed age participants as the adults can’t help but smile and the children can’t help but ask to play again and again.

The central act of physically throwing game pieces paired with no downtime is infectious for youthful minds – regardless of the actual age of your organs. It nails many of the joys of contemporary gaming and pushes the boundaries when compared to what a typical family is likely familiar with.

This is the type of game that you can even pull out for some alcohol-fueled nonsense with a group of gamers. You won’t want to do this too often, however, as you can risk rubbing off some of the magic by normalizing the nonsense with repeated play in a short period of time. That nonsense is really the driving force and you want to retain that sense of lunacy as long as possible.

German standout publisher HABA games and designer Alexandre Emerit are onto something. While Boom, Bang, Gold won’t revolutionize the family game, it certainly will provide hours of joy and infectious play.

What are your favorite family games? Let us know in the comments!  And be sure to join host Becca Scott on Game the Game every Thursday here on Geek & Sundry to watch the best boardgames played with fantastic guests!