After a short but successful Kickstarter campaign, Game Salute‘s three new games based on The Princess Bride book and movie are now available at your friendly local game store! These card games are quite the treat for any fan of the movie, with each playable in 15-30 minutes and chock-full of movie references! 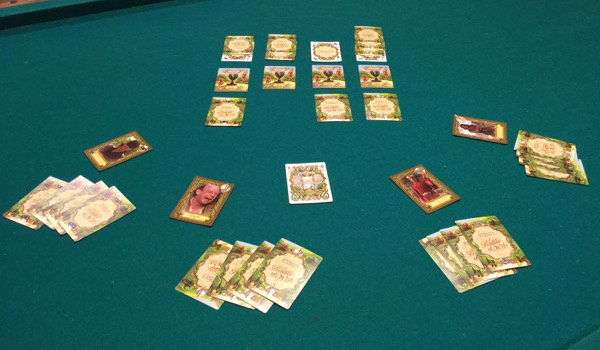 A Battle of Wits

In this game, 2-10 players relive the scene in which the Dread Pirate Roberts and Vizzini drink to the death in A Battle of Wits!

Players start the game with similar hands of cards, each labeled as wine or poison and numbered to represent the strength of the wine, poison, or bid to drink. Each card also has a symbol printed on it so you know who played it. This opens the game up to all sorts of devious banter to goad your enemies into revealing their strategies.

On each player’s turn, a wine or poison card is secretly placed in a goblet. Alternatively, a player may bid on which goblet they wish to drink from at the end of the game by placing a card below the goblet of their choice.

At the end of the game, goblets with more poison than wine will kill whoever drinks from them. Everyone must drink, and only those who successfully bid on the unpoisoned goblets will live to battle again!

My favorite part of this game is the slow reveal of the contents of each goblet. Every other time the dealer plays, the oldest wine or poison card on each goblet is flipped up, revealing a little bit about players’ strategies. This can incite very real desperation in the game because it forces strategies to change and throws everyone off their game! 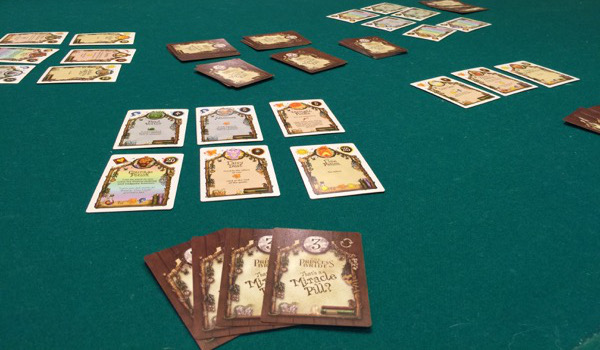 Players take on the role of Miracle Max in this drafting game for 2-6 players. Collect ingredients to create the most potent Miracle Pill as possible so that you can revive the “mostly dead” Man in Black.

The game is played in three rounds. Every round, each player receives a hand of four cards. These cards represent the ingredients available. On each turn, the players choose the best ingredient from their hand. The selected cards are then revealed simultaneously and any effects on the cards are resolved. The remaining cards are then passed on and another turn is played. When there is only one card in each player’s hand, the unplayed cards are discarded and the round ends.

There are seven different types of cards in the game, each represented by a different color. Each card type has a different effect that can do anything from multiply the score of your other cards to decreasing your opponent’s score. There are also potions–ingredients that are powerful but require you to sacrifice cards you have already played in order to use them.

Miracle Pill is by far the easiest of the three games to learn and has the fewest references to the book and movie (don’t worry, it still has plenty to go around). It’s an excellent gateway game for bringing your movie buff friends into the wide world of tabletop gaming. 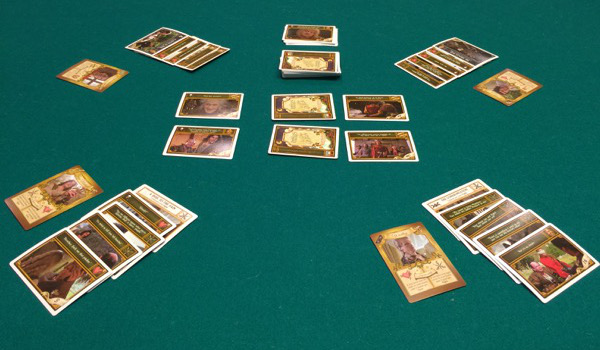 No, As You Wish is not a kissing game. It’s a drafting game and it is very different from Miracle Pill. The goal of this 2-6 player game is to complete the quest of the movie character you are assigned at the beginning of the game.

Each character has two attributes that are important to them in their quest: fighting, glory, love, might, or wit. Players must draft cards with the correct attributes in order to maximize their score at the end of the game. Drafting is not as simple as taking the best available card, though. It is a perilous business that can get you poisoned, lose points, or even help your opponents in their own quests. 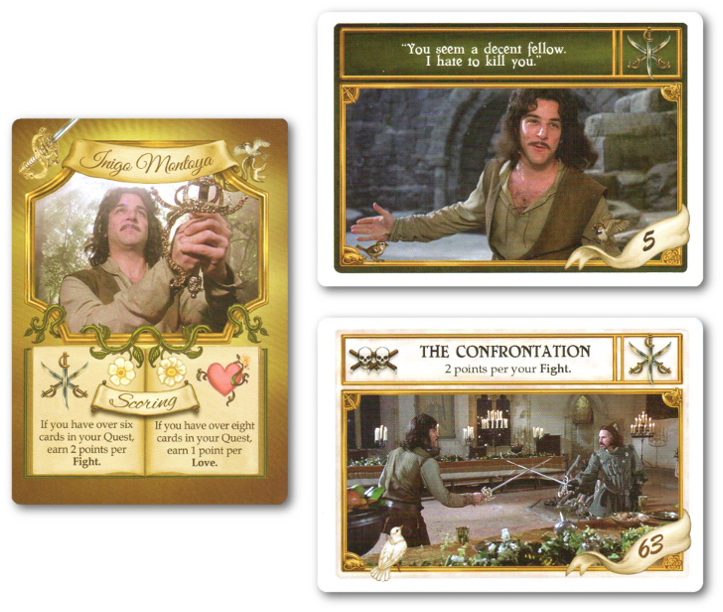 Drafting is risky because the dealer places some cards for the draft face-up and some face-down. You never know whether the dealer is laying a trap by hiding poisoned cards or if they are trying to keep powerful cards from the other players. You can go the safe route and choose a card that may have little benefit to your quest or you can take a risk and draw a face-down card. Fortunately, the dealer changes each round so you can make up for your blunders when it is your turn to lay the traps!

Besides having interesting gameplay which does a great job following the desires of various characters from the movie, this game is an amazing source for The Princess Bride movie quotes! All 75 of the quest cards show a different scene from the film and the scene’s corresponding movie quote.

If you’re like me and love reminiscing over movies by way of quotes, you will get a huge kick out of playing this game!