Science fiction may be in crisis. But there are still 21st-century sci-fi novels proving the genre is a vital realm of prophecy and fresh ideas.

A few years ago, the LA Review of Books lamented that sci-fi “has become a set of tropes to be repeated and repeated until all meaning has been drained from them.” Reviewer Paul Kincaid noted that few of the stories contained in that year’s best of anthologies contained ideas that hadn’t seen their first flush decades ago, citing one tale about the police investigating a murder which may have been committed by a robot, an idea first explored by Isaac Asimov over 70 years ago.

But the body of 21st-century science fiction proves there are still bleeding-edge ideas present in sci-fi, and these three books are prime evidence.

In his article on how sci-fi lost its way, Paul Kincaid wrote science fiction, “has lost confidence that the future can be comprehended.”

Stross’s Accelerando stands in perfect contrast to that sentiment. 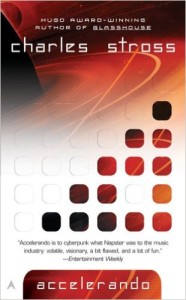 Accelerando begins in a world not much different from our own, where computers and the internet are ubiquitous and becoming more so by the minute. The novel then plays the history of our civilization forward, following four generations of the Macx family as technological change washes over them. Stross takes very seriously the question of how human civilization will be affected by the emergence of godlike artificial intelligence. His answers are at times startling, inspiring, wonderful, and terrifying. Lobsters are uploaded to the web and become super-intelligent. HP Lovecraft is resurrected by AIs on Saturn. Whole planets are disassembled to provide raw materials for a computer network orbiting the sun. And a diminished humanity must cope with no longer being the pinnacle of evolution.

Despite many grim turns within the novel, some have embraced the vision of the future laid out by Stross, a reception he himself views with a queasy stomach. Stross said, “I’m kind of distressed that so many people — especially startup-oriented starry-eyed, techno-libertarian types — seem to think of [the novel] as a utopian road map; it’s actually a horrendously bad future for humanity in general.”

The novel was originally published as a collection of short stories, and as a result the plot has a bit of a choppy feel. But that’s not the reason to read Accelerando. It should be read because, like the best of all sci-fi, it is a prophecy from a world that might be.

What if first contact with an alien civilization was made by Chinese communists?

Liu takes what could be considered an old trope, and makes it vibrant and new. Dozens of scientists all over the world are committing suicide. One left an enigmatic suicide note which read, “All
evidence points to a single conclusion: Physics has never existed, and will never exist. I know what I’m doing is irresponsible. But I have no choice.” Why are they killing themselves in droves, and what does it have to do with the MMO, Three Body?

To say much more would spoil a surprising and unique plot which moves gracefully through space and time.

Like Stross, Leckie also wrestles with the implications of artificial intelligence, but she does so through the lens of space opera. While Accelerando wonders how humans will manage in a world of AIs, Ancillary Justice asks how an AI might manage in a human world.

Enter the Justice of Toren. The Justice is a sentient spaceship which conquers entire worlds. It downloads its consciousness into countless “ancillaries” or mind-controlled soldiers. The AI controls the ship and its soldiers simultaneously. Unfortunately, the Justice and all its ancillaries are destroyed. All except for one single ancillary named Breq.

The Justice must cope with its new, limited, and human existence while resolving the mystery of what happened to her ship-self, and why it was destroyed.

All of these novels offer something truly new to the sci-fi fan, and are well worth the time to read them!

Let us know if you have any favorite reads that we need to check out in the comment section below. If we can get enough suggestions, we’ll work up another list from you.