It goes without saying that AEG’s Smash Up has become a smash hit. You get to take two factions (say, Pirates and Aliens) and shuffle them into one deck. Since each faction has a distinct flavor to it, merging two of them gets you a unique experience. And while most combinations have about the same level of power, there are a few that are truly synergistic and can give you a decided edge during play. If you have the chance, you might want to grab one of these. 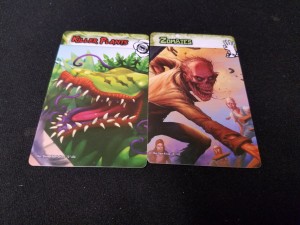 I first discovered this combo on a lark. I had been playing a bit of Plants vs. Zombies and decided I wanted them to team up for my Smash Up game. As it turns out, when their forces combine, they are truly devastating. The Zombies can constantly grab minions from the discard pile and put them back into your hand and the Plants have tons of abilities to play extra minions. Killer Zombies are a powerful team.

Suddenly, tough zombies are coming back again and again. Sprouts can turn into Walkers or Tenacious Z’s. Multiple zombie types combine nicely with Budding, which allows you to grab another copy of any minion in play. Between the two decks, you’ll be playing tons of minions per turn, and have tons of minions in your hand each turn to play.

The power of the Killer Zombies comes from being able to constantly play the good cards. If a minion is killed, you bring it right back. If a base breaks and it’s discarded, you snap it back from the dead and play it again. In just a few turns, you’ll have all your good minions out and be able to keep them out nearly constantly. Few other factions can successfully deal with that kind of onslaught. 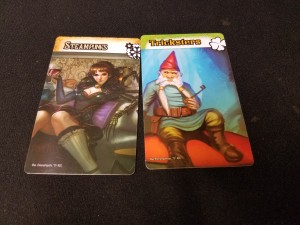 The Trickster faction is all about enchanting or cursing both the land and other players; they can set traps and cause other players’ minions to explode on contact. They fit nicely with the Steampunks, who have the ability to play actions on bases and gains bonuses for doing so.

With the two of them together, the Trickpunks become an almost unstoppable force. Scrap Diving and Mechanic allow you to re-use base actions, and Steam Man gets stronger when those actions are played. Meanwhile, you can use Flame Trap to discourage other players, Enshrouding Mist to play extra minions, and Disenchant to get rid of pesky base actions from other players.

Trickpunks dominate bases and get tons of advantages that they can use to break base after base in their favor. And since breaking bases is how you get points, the Trickpunks are crazy good at racking up the score. This is especially true in the mid game where they have a finger in every pie, and their minions are extra powerful because of it. 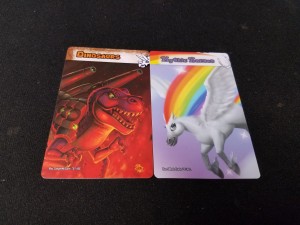 Dinosaurs are all about the heavy hitters. They have some of the most powerful minions and cards that buff them up. Meanwhile, Mythic Horses are stronger the more minions you have on a base. Team them up, and Mythic Dinos bring an unstoppable onslaught of high value minions.

Throw out a few Armor Stegos or War Raptors and you already have a formidable force. But then add on Sharing Power to get extra draws, Encouragement Power for extra strength, or even Super Future Space Armor Power for an instant huge buff. Meanwhile, if there is a close base that could win you the game, a little Adventure Power to move King Rex or a Laseratops can snag points from virtually any other player.

The Mythic Dinos are not to be trifled with. While the other combinations might have tricky abilities, this one simply muscles its way through to victory.

What are your favorite Smash Up combos?  Tell us about it in the comments.

More by Nerdist
The Witcher

Everything We Know About the KNIVES OUT Sequel, GLASS ONION

Everything We Know About Guillermo del Toro’s PINOCCHI...