Board games are great for traveling. One of the great attributes of board games is that they are (generally) analog. You can take them with you and have a great experience even if there’s no power or battery supply. But that doesn’t always mean they travel well. Some games can gobble up a lot of real estate and may not work on the road. But there are some absolutely fantastic games that are fully portable.  In fact, some have a slim enough footprint that you can play them during travel, not just at your destination. Here are three titles that you can play on the plane or in the back seat of the car on the family road trip.

Roll Through the Ages 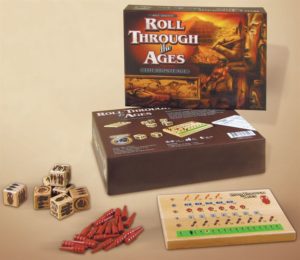 Through the Ages is perhaps the best, epic civilization building game out there. But it won’t fit in the back seat. Enter Roll through the Ages. Designed by Matt Leacock of Pandemic fame, Roll is an attempt to combine the ease and accessibility of die rolling with the planning and purpose behind civilization builders. And it succeeds.

Each turn, a player rolls several chunky wooden dice. If your back seat is cushy, the box lid makes an excellent container. You might get workers which can build particular monuments, commodities that can give you special abilities, and food to keep your civilization going. But, you might also roll disasters. Depending on how many your roll, it can get pretty ugly for your settlements. Which also creates a great push-your-luck element among the other strategies.

Roll is a perfect back seat game. Each player gets a small peg board to mark their resources and a score pad to mark which monuments or developments they’ve created. And, despite its small physical footprint, it provides a solid experience. You’ll have to decide whether to stock up on food or push through on a major accomplishment. Those choices and the fate of the dice will keep you entertained throughout the trip. 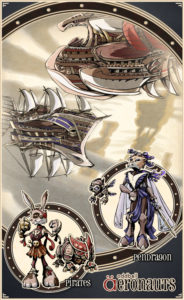 Oddball Aeronauts is almost unique in that it can be played entirely within your hand. There’s no playing surface needed. Each player will have a deck of cards and will be able to play them off against each other. Discarded or lost cards simply go to the bottom of the deck upside down.

Each player has their deck face up to begin. They can look at the top three cards. On their turn, a player decides which of three skills will be used and then each player can use up to the top three cards competing on that skill. The winner will recover discards or make the opponent discard. And when someone discards all their cards, they lose.

It may sound like a spruced up version of War, and there are certainly parallels. But there’s much more strategy to it than that implies. You can decide on which skills to compete and use bonus abilities from underlying cards. Sometimes it may be better to recover a card or two, and other times it may be all about making the other guy discard. Plus, it comes with extra cards for some mild deck-construction. Which is yet more activity that can take place on your road trip. 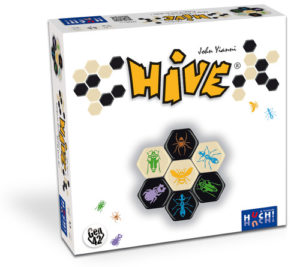 By far the most abstract game on the list, Hive is a two-player tile laying game. There are no boards and no cards, just tiles for each player that display a type of bug. Each bug can move differently. The grasshopper moves from end to end while the ant can move all around the outside. The goal is to completely surround the opponent’s queen.

Hive is borderline brilliant in the way it plays. Like many great abstract games, it has just a few simple rules. This makes it easy to teach and players can get into the game quickly. But the strategy from that simple rule set is rather enormous. The first time you play, you’ll think you’ve got a hold of the game only to see your queen surrounded unexpectedly. And that often leads to another play. And another after that.

Hive’s tiles are extremely portable and are large plastic. This makes them relatively immune to water damage, soda spills, or other hazards of road food. Its small footprint makes it easy to play anywhere. But most importantly, it has a surprising amount of depth for such a physically small title and it’ll keep you entertained for a long, long time.

What small board games do you travel with? Tell us about it in the comments.

TAGGED: roll through the ages, Hive, oddball aeronauts, Board Games