While the majority of board games still use wooden tokens or cardboard bits, more than a few are starting to get delve into the wonderful world of minis. In fact, there are some wonderful titles out there with high quality miniatures nestled snugly among the other components.  And that means exciting opportunities to practice our painting skills and make those miniatures even more amazing.

Perhaps the most interesting and imaginative minis are from Kingdom Death: Monster. Of course, that box of goodies costs several hundred dollars. For those of us without that kind of disposable cash, here are three great games that provide tons of minis for your painting pleasure. 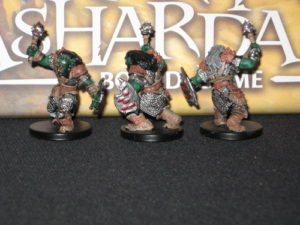 So far, Wizards of the Coast has published four titles in the Adventure series: Castle Ravenloft, Wrath of Ashardalon, Legend of Drizz’t, and Temple of Elemental Evil. All run on a similar system and the final title in the series even creates a sort of campaign system which chains the various scenarios together. But all of them come with minis.

The miniatures are very good, and more importantly, any lack of detail is more than made up for by size and variety. Many board game miniatures are on the small side – requiring a more steady hand and exponentially more patience. The Adventure series minis are nice and chunky. Not only does it make them easier to paint, but they look fantastic on the table. The trolls and Flesh Golems tower over the heroes. Even the kobolds have enough room to give them good details.

And the variety is nothing to sneeze at. In any of the games, you’ll get a bunch of different kinds of monsters; little goblins, larger orcs, even a dragon, or efrit. One of the things that can make painting a chore is when you are painting the same sculpt over and over again. A whole army of same-posed rat men. Ugh. But the Adventure series really allows you to explore a wide variety of figures and let you work on that creative itch. 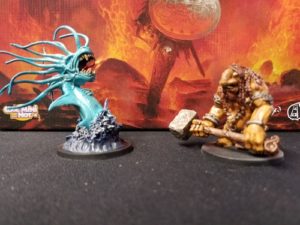 Published by CMON, Blood Rage delivers on the high quality minatures you’ve come to expect. As with many of their games, you get as much effort in the detail and sculpt of the minis as you do with the underlying gameplay. And that’s true even with Blood Rage, where the gameplay is phenomenal.

Blood Rage comes with four tribes for the players to choose from. Those factions each embody a different motif. So the Bear faction has large skins on its back while the Raven tribe is adorned with feathers. Each tribe also has a unique leader figure as well as two different sculpts for its warriors. This is ample variety to keep your paintbrush moving and motivated.

But it isn’t just the player factions. There are nine neutral monsters that, during the course of the game, can be recruited by any player. Each is a unique sculpt and can provide great opportunities to practice your skills. You have a basic troll with a lot of bare skin, a sea serpent with surrounding water, and even an ice giant hurling a huge boulder. While not every monster will be used in each play, the added paint makes them look that much more intimidating and will make the board look far more exciting.

War of the Ring 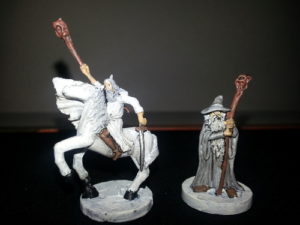 If you’re looking for a game with a lot of minis – like way more than you can hold in your arms – then War of the Ring is the one to choose. The base game comes with nearly 200 miniatures in a wide variety of forms. Plus, these figures are just begging to be painted. Although the pieces are arrayed in seven different armies, they all cry out for some level of paint just to make them easier to see on the map.

The models also let you be creative in how you want to represent them. Some players will carefully base each model, so it looks like they are standing in dirt or grass. Others will paint the bases to match the nation colors of the armies. That way, it’ll make playing easier. You can use a color scheme from the movies, or stay true to the books. You can paint each individual model to a high quality, or you can quickly use a base coat and dry brush to get a little definition and move on.

Better yet, if you aren’t satisfied after painting regulars, elites, and leaders for each army, as well as the Fellowship Companions and the Minions of Mordor, the expansions offer even more. Lords of Middle Earth gives you new figures for Aragorn, Gandalf the White, and the Mouth of Sauron while also adding Galadriel, Eldrond, and the Balrog. Meanwhile, Warriors of Middle Earth introduces six new factions, with eight figures each, for your painting pleasure.

What board games have you loved (or longed) to paint?  Tell us about it in the comments.