Three Games That Show How Great Dice Can Be - Nerdist

Three Games That Show How Great Dice Can Be

Rolling cubes is fun, and dice games have come quite a long way since Yahtzee. Here are three of the best out there right now.

Roll for the Galaxy 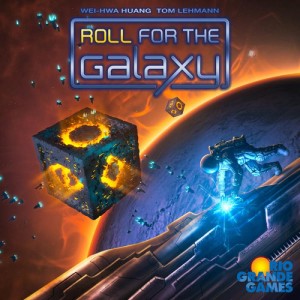 Players each begin with randomly distributed unique faction powers and starting worlds. They also get five dice featuring the five actions available. On a turn, the players secretly roll and assign their dice.

In Roll for the Galaxy, you aren’t at the mercy of a given roll. First, you can take any die, no matter the face, and force it onto one task. So if you really wanted to Produce, then you could take any die and place it there. Boom. Also, if you want to change the facing of a die, you could discard one of your dice to change the face of another. This game gives you the tools to turn the die roll from a deterministic event into a starting puzzle.

From there, everyone reveals their dice. But the catch is that the actions only get taken if someone forced that action. So, if I rolled a bunch of Explore dice, but decided to force Ship, and then no one else forced Explore, then none of those Explore dice would be used. So the game is also about seeing what other people have, trying to anticipate what they might play, and then riding that wave to the best of your ability.

And it’s so much more than dice. You have to run an economy where you produce money, since used dice cost money to get back. The end result is a dice game that feels like players are firmly in control of their fate.

Maybe you want something simpler. Zombie Dice may just be the answer. Here, the players are zombies trying to grab tasty, tasty brains before they get shotgunned by the survivors they are chasing.

The game comes with thirteen dice. Green dice have three brains and one shotgun face. Yellow dice have two of each. And red dice have three shotguns and only one brain. All dice also have two “runaway” sides. On their turn, a player randomly draws three die from the cup and rolls them. Any brains or shotguns are set to the side. If a player rolls brains, he can either decide to bank them, and pass the dice to the next player, or keep rolling. But if he accumulates three shotgun blasts, he loses all accumulated brains on that turn. The first player to 13 banked brains wins.

The concept is simple, but there is an undeniably enjoyable element in the press-your-luck mechanic. It can be played with any number of players, and it always provides a quick and enjoyable time.

Escape: Curse of the Temple 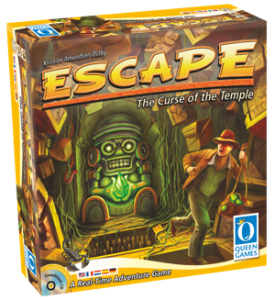 In Escape, the players are explorers who have made it into an ancient temple. The doors are closing and they need to get the gems and get out before they are locked in forever. In this cooperative, real-time title, the players roll their dice furiously in an effort to collect the needed symbols and get out before the game ends. Players can only achieve victory if everyone escapes.

Mechanically, the game is pretty simple. You roll dice, pick up ones you don’t like, and roll them again. You roll until you get the combination of dice you are looking for. Maybe you need a person and a torch to move to another room. Or five keys to unlock some gems. Roll until you get it.

But there are two big barriers. First, the game uses a sound track approximately 10 minutes long. If you take longer than that to make your way through the temple, you lose. Second, the dice also have black masks. Black masks cannot be rerolled and basically just make you have a dead die. So instead of rolling five dice, you start rolling four. That is, until you roll a gold mask, which can be used to unlock up to two of your black masks.


What dice games do you enjoy the most? Tell us about it in the comments.

TAGGED: roll for the galaxy, escape curse of the temple, zombie dice, Board Games