Three Games that Got Even Better with a New Version - Nerdist

Three Games that Got Even Better with a New Version

Often, a second edition of a board game will clean things up, correct a few wonky rules or errata from the prior version, or make some cosmetic improvements. Which are all good things. But sometimes, the second edition is so much more. It dramatically changes gameplay, reinvents the title entirely, or otherwise makes it a completely positive experience. Here are three of the games that came out with the best version 2.0. 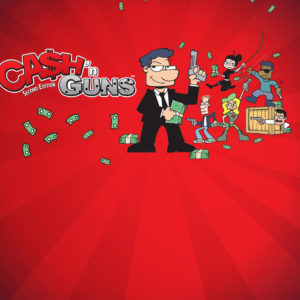 The first edition of Cash n’ Guns came from a simple premise. You’ve just returned from a heist and now you’re trying to divide the loot. And you do so in the most equitable way possible – you put some loot on the table and then threaten to shoot someone if they don’t back off. Of course, most of the time, your gun is filled with blanks. So it’s a fun experience filled with bluffing and pointing foam guns at one another.

Enter Cash n’ Guns (Second Edition). The new version keeps the same core as the original. But it includes some awesome changes. In some ways, it streamlined the game. No more “Bang, Bang, Bang!” cards that function similar to Magic’s Interrupts. Like Magic, it became clear that they were simply more trouble than they were worth and removed. This allows the fun part of the game to flow much more smoothly.

But it also added to the game by changing the kind of loot involved. Sure, there are still paper bills backed by the full faith and credit of the government. But now there are works of art. Get one or two and they aren’t worth much. Get five or six, though, and you can blow away those greedy players snatching at bills. There are also diamonds, health, and the right to handle the next round. It means players will view the pot differently and allows far more opportunities to bluff and double bluff. 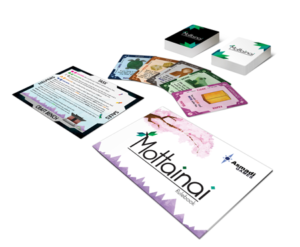 There once was a game called Glory to Rome. And it was beautiful. Like many Chudyk designs, it allowed players to build massively powerful combinations of cards that nearly broke the game. In fact, the only way it could be called balanced is because typically all players were working some sort of “broken” combo. Unfortunately, an ill-fated kickstarter and legal disputes mean that it is unlikely every to be printed again.

But the title has a spiritual successor, Mottainai. Rather than rebuilding the capital of an ancient empire, the players are now Buddhist monks maintaining a temple. And while the thematic content is entirely new, the gameplay is highly reminiscent of its predecessor. You still place cards into a pool, have clients that allow you to take more actions, and build items for powerful abilities.

Mottainai, though, comes with several improvements. The way the pool is handled is much, much better. If you play a good card, it doesn’t go to the pool immediately, instead it will only arrive at the beginning of your next turn. Which means, you’ll be the first to try to snatch it up. This is far better than Glory to Rome where the player to your left had the first opportunity to grab a good card. It means a lot more card play and a faster paced game.

Key to the City: London 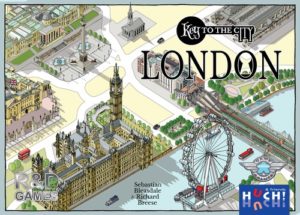 One of the best games in the Key series is the recent Keyflower. This game is every auction-philic, euro-lover’s dream. Each round, you bid on tiles by using three different currencies. Once you bid in a currency, it’s locked in with that type. So there’s a great tension between bidding early – thus allowing opponents to strategize and outbid you at inopportune moments – or bidding late – thus risking an opponent bidding with a currency you don’t have.

Keyflower is an amazing, solid game. But it also has some downsides. It’s a little on the long side, especially as players grab more currency mid round. And the end game scoring can sometimes be a little surprising. Enter Key to the City: London. This new version retains the multi-currency bidding that made Keyflower so fantastic. But it streamlines the resources so instead of chasing after gold and wood, you simply grab and add connectors to your board. Further, there is no way to get currency mid-round and that makes the game clip along more smoothly. Plus, it lets you know what bonus tiles there will be by end game – allowing much more strategic planning.

Key to the City provides 85% of the Keyflower experience and does so in a shorter play time with a less involved ruleset. This may not be as straight an upgrade as the others. I do miss the green meeples and the resource movement that was stripped out of Keyflower.  But for many gamers, it’s a price worth paying in order to get the other benefits.

What second edition or new version games have impressed you the most?  Tell us about them in the comments.