Three Exciting Titles and the Designer Behind them All - Nerdist

Three Exciting Titles and the Designer Behind them All

Many designers have their own style and their games tend to have a common flavor. But some are so unique and interesting that their name alone piques interest in an upcoming title. Solidly among that group is Carl Chudyk. A Chudyk game typically has cards that are used in a variety of ways and often leads to near game-breaking combinations. For many Chudyk designs, it’s not about exploiting a particular setup, but instead about obtaining one of numerous powerful synergies and being the first to bring yours crashing on top of your opponents. 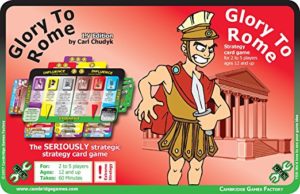 Perhaps the most well-known Chudyk game is Glory to Rome, and not because of the horror-story kickstarter. In this wonderful title, the players seek to rebuild Rome. There are six types of cards, each of which allows you to perform a particular action. But if you perform it, then all players can discard the same kind of card to also do it. But cards are more than just actions. They can also become construction material, clients who aid you, and buildings which, when built, provide all sorts of special benefits – even automatic win conditions.

Glory to Rome is highly interactive and requires you to constantly be on guard against your opponents. There isn’t just one or two “overpowered” strategies. There are numerous. As a result, the game finds a strange balance where each player is rushing to accomplish their own super powerful combo and smash everyone else. While it does make the game swingy at times, if you can get past that it will deliver an amazing experience every time.

Because of publisher and litigation issues, Glory to Rome is out of print and hard to find. But the core concepts were reimplemented in Chudyk’s 2015 design, Mottainai. 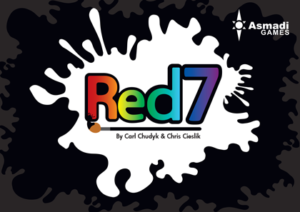 While Glory to Rome is a fairly beefy game that certainly caters to gamers, Chudyk has dipped his toes into lighter titles as well. Red7 is a perfect example. At the start, the player who plays the highest card in front of him is the winner. And, at the end of each turn, you have to be winning. So if you play a 3, I have to play a 4. Then it’s your turn and you have to play a 5 or better. And so on.

The trick is that it isn’t just about playing the highest card. Each card comes in one of seven suits. And each suit can be played to change the rules. Maybe you can’t win by playing the highest card because you don’t have one. But if the rules were changed to most-of-the-same color, you would be winning. So you do that. If you can’t win on your turn (including because your hand is empty), you’re out.

The Chudyk staple of having cards with multiple uses is present once again and it really allows players to be clever. Red7 is about manipulating both your own hand and what you think your opponents might be doing. You want to ensure that you can change the win condition to your favor when needed. But the game is still light enough to play with non-gamers or over a brief lunch break. 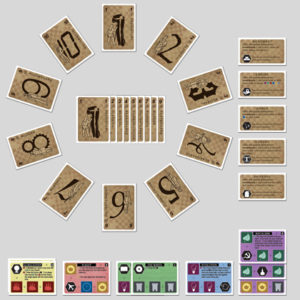 Innovation is a Chudyk design through and through. Players play cards to their tableau which have special abilities. But those abilities impact other players based on symbols showing on all cards in the tableau. Which means I might be immune to your attack because I have too many parapet symbols. But if I cover some up by playing another card (with a better ability), I may suddenly become vulnerable.

The goal is to get a certain number of achievements. They can often be obtained by getting enough points or by accomplishing specific tasks. And there are tons of ways to get points. You can add cards directly to your point pile, steal them from other players, or even redistribute points in your favor. It all depends on what cards and symbols you are sporting.

Innovation is a great game, even though it too can feel a little swingy. There might be times when someone who is behind suddenly gets the right card or symbols and starts dominating. This is not the kind of game that has a linear progression from beginning to end. Instead, there is a lot of back and forth with multiple players having the upper hand throughout the game.

Have you played any Chudyk games?  Tell us about your favorites in the comments.