Three Deep Tabletop Board Games that Play In About an Hour

Nothing beats diving into a really meaty, deep board game. You can see empires rise and fall, carefully laid plans that slowly build to fruition, and can craft a fine balance between long term goals and more immediate gains. The only bad part is that such games can also take far too much time. Longer even than you or your group might have available.

But there’s no reason shorter games can’t come packed with similar levels of depth and engagement. In fact, there are some crazy interesting games that can be completed in only about 60 minutes (or so). Here are three fantastic and wonderfully deep titles that you can get through quickly. 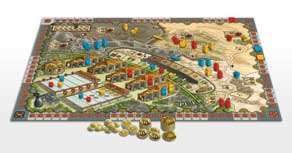 Thematically, Yunnan is all about traveling the tea road out into China and delivering your goods. You’ll start with just a handful of men, and a rickety horse that barely gets you to the next province. But as you increase in influence and power, you’ll build bridges, stymie your opponents, and race to erect teahouses. And it will complete in an hour or less.

Partly that’s because Yunnan is a race to 80 points. While there are some end-game bonuses that get tallied thereafter, it is almost everyone’s goal to hit 80 first. After all, if you let it pass by and give the game another round, that’s one more round for all of your opponents to try and catch up with you.

The main thrust of the game comes from the auctions each round. Players bid to get more border passes which allow you to go farther, a better horse to carry you down the trail, or more workers to sell your tea. You can even amass influence that lets you bump opponents backward.

Depth is immediately present as every decision can be critical. Even something as simple as turn order can bestow huge benefits or penalties. But Yunnan is utterly devoid of random elements. Everything is under the players’ control – which means you have to rely entirely on strategy and reading your opponents rather than on a lucky roll. Yunnan will end quickly, but leave you very satisfied. 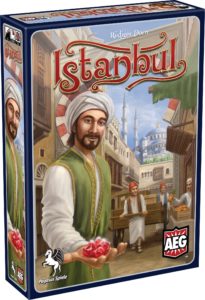 Grab your wheelbarrow and your apprentices, because it’s time to gather rubies. In Istanbul, you run from stall to stall in the Turkish market trying to buy and trade until you can grab the precious rubies. Like Yunnan, the game is a race – this time to five (or six) rubies. The first one there wins, so there are few wasted actions and the game feels increasingly tense as your opponents start gaining ground.

Istanbul has an interesting mechanism where you have a stack with several discs. You can travel up to two spaces, but you can only interact at that market stall if you drop off a disc or pick one up. So you can’t just make a bee-line toward your favorite spots – you’ll run out of discs. Instead, you have to ensure that when you stop somewhere, you have at least a medium-term plan of coming back there. Careful planning will win out over tactical whimsy.

While the base game of Istanbul is good, the real depth comes after you add in the first expansion, Mocha and Baksheesh, and is helped further by it’s most recent addition, Seals and Letters. They not only add the coffee and seals – which greatly open the decision space by creating new ways to get gems – but they also expand the size of the board. That increased size dramatically impacts how quickly you can move around, and makes investment in special abilities very worthwhile.

But no matter how much is added on, it’s still a race for rubies. And the shorter turns mean that the game never really slows down. Buy and sell to snap up those rubies before your opponents do. 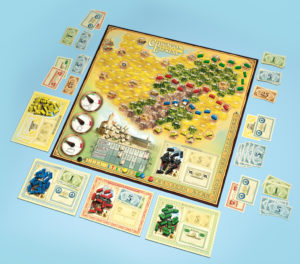 When I think of games that are particularly involved, I tend to think of the 18XX series. Unlike more familiar train games, here you don’t really play as a particular company or color. Instead, you can invest in one of several companies, along with the other players, and you make money only as an investor. While intriguing, heavy train games can last several hours. Chicago Express takes many of those concepts and squishes them into a much more manageable time commitment.

Chicago Express keeps the investor element. Which makes the game provocative. Playing the stock market creates organic alliances. If I own a share of red and you own a share of red, maybe we both work to make the red company profitable. After all, we both make money as against the other players. But then if I buy a second share – so now I get double the benefit that you do – maybe you turn your attention elsewhere. Or, more dastardly, intentionally sink the red company so that I don’t benefit any longer.

Managing these subtle alliances, based only on self-interest, is a huge part of the game. Companies will rise and fall. Sometimes an investor will go hard in a few companies and really make them profitable. Others will try to spread the risk across all of the lines and try to win that way. The one constant is that the game ends before you are ready for it – and that helps to keep it short and sweet. And brutal.

What are your favorite deep games that only last about an hour?  Tell us about it in the comments.