You may not have been there on the day Horus slew the Emperor, but through the eyes of some of Warhammer 40,000’s most famous heroes you can experience it. Known as the Horus Heresy, the events of the 31st millennium pit loyalist against traitor and brother against brother. The details of the final conflict have yet to be revealed but we know what happened and how it shaped the grimdark future of the Warhammer 40,000 universe: a chaos-tainted Horus was slain by his father the Emperor, but not before dealing a near-fatal blow that resonates to this day.

The story of the Horus Heresy is told through an epic series of books. The series currently features 54 titles! It begins with the novel Horus Rising, a look at the powerful Primarch Horus that sets the stage for his treason and turn to chaos. Horus Rising, along with its two direct sequels False Gods and Galaxy in Flames, is included in the latest Black Library Humble Bundle. 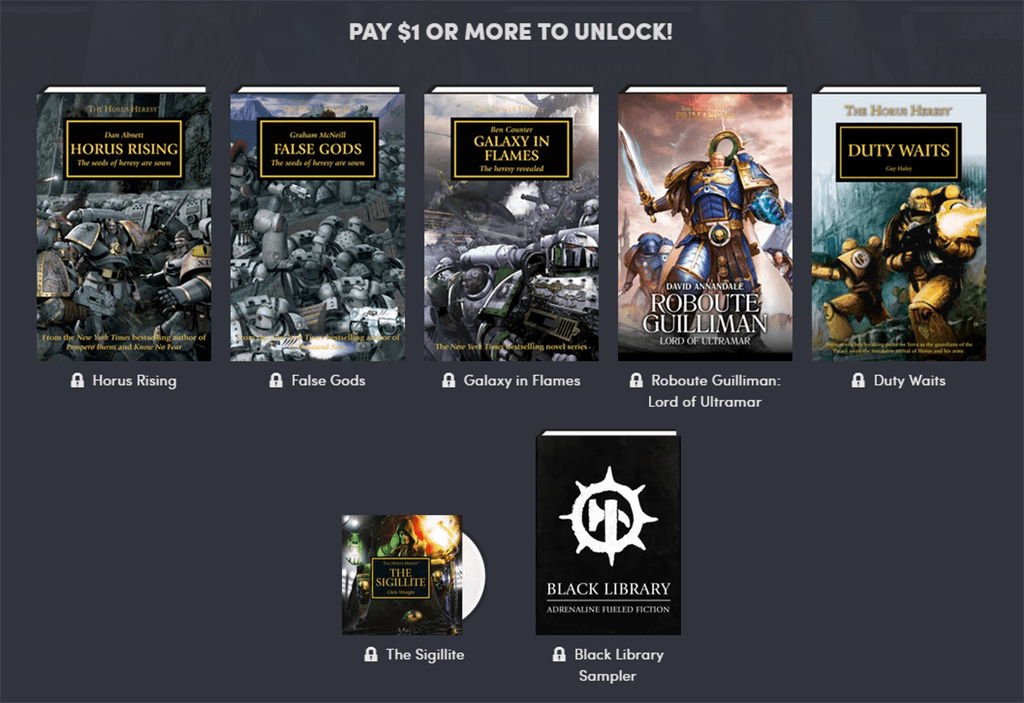 For the uninitiated, Humble Bundle allows you to purchase a collection of digital good – ebooks and audiobooks in this case – for as little as a dollar.At the $1 level, this bundle will get you 5 ebooks and an audiobook. $8 will add another audio book and 6 ebooks, and paying at least $15 gets you a total of 21 books and 4 audiobooks! A portion of what you pay will also be donated to a charity you can choose from an extensive list.

In addition to the novels setting the stage of the Heresy itself, there are also a few stories about the great Primarchs. Sons of the Emperor, it is the Primarchs themselves who either chose to remain loyal or turned themselves and their legions against their own father. The latest Horus Heresy novel, The Buried Dagger, was just recently published and is the last in the series set prior to the Seige of Terra. It’s the perfect time to jump back into the dark history of Warhammer 40,000 and this bundle is a great way to do it.

What are your favorite Black Library books? Tell us in the comments!

In addition to Geek & Sundry, Raf Cordero co-hosts the gaming podcast Ding & Dent. Chat with him on twitter @captainraffi.