We love showcasing fantastic community stories from gamers all over the world! From the mother and daugther who bake boardgame-inspired cakes to the woman who uses gaming as medical therapy, there’s so many inspiring stories out there. Here’s one of them.

Ethan Schoonover is the Technical Director at the Lake Washington Girls Middle School (LWGMS) in Seattle. He’s also the Dungeon Master of a very special after-school club we all wish we could have belonged in—the official D&D Club at LWGMS.

Originally inspired by Stranger Things and the Dungeon Master prowess of Matthew Mercer, D&D Club has expanded into a D&D elective class and an upcoming summer camp for these passionate girls, all thanks to the hard work of Mr. E. 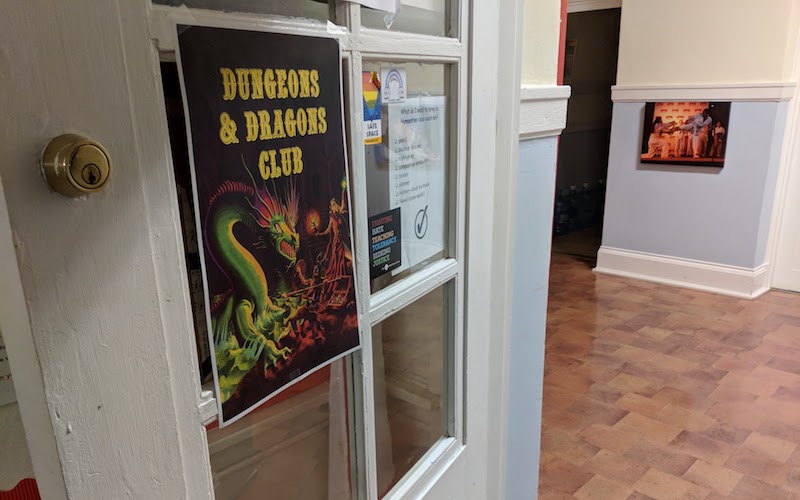 Ethan is a lifelong Dungeons & Dragons fan, starting during a childhood straight out of Stranger Things, he says, with dirt bikes and walkie talkies and D&D games with his friends. Life got in the way for a while, and he didn’t begin playing regularly again until 2016.

He decided to DM for his own kids, but thought he could use a little help before getting started. “In that search I came across the GM Tips video series with Matt Mercer and later Satine Phoenix,” Ethan says, “and just consumed them in quantity. Matt and Satine prove that nice people can DM and still be funny and witty.” 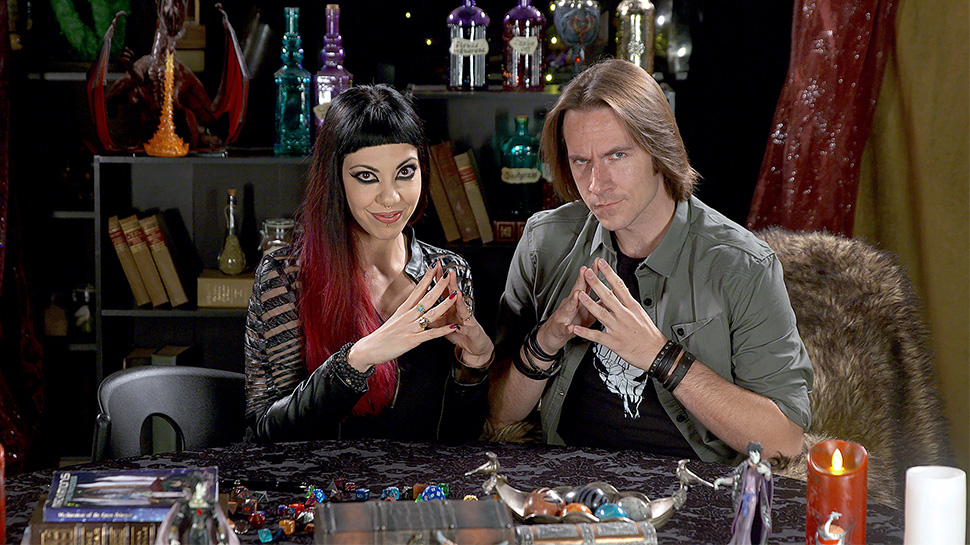 His busy schedule doesn’t allow for regular viewing, but he does catch an episode of Critical Role here and there when he can. “The cast is great, but let’s be honest, I’m watching Matt like a hawk and picking up ideas for my own games,” Ethan says. “Pure gold.”

Now in his second year at LWGMS, Ethan had floated the idea of a D&D Club after a student fell in love with the idea of playing the game, thanks to watching Stranger Things. “For the next three weeks,” he recalls, “there was a daily check in from her: ‘Mr. E, have you started the D&D club yet?’ So when we rolled over our club roster I made sure we had a Friday night slot set aside for D&D, and we’ve been going strong ever since.” 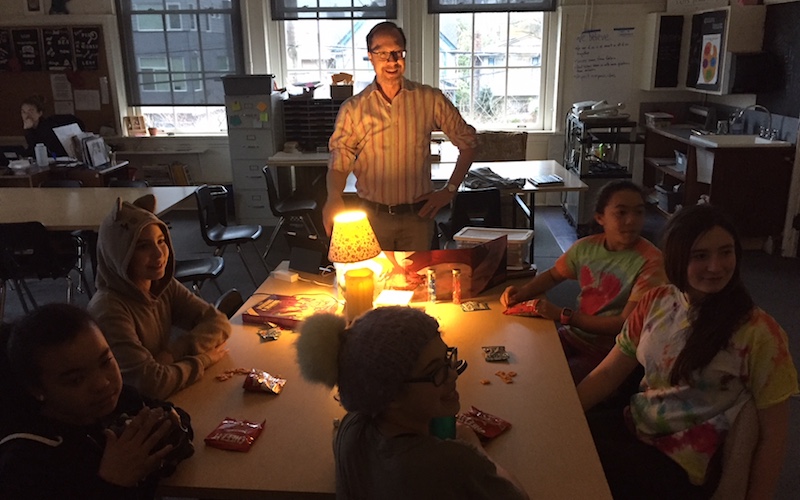 With not a lot of time to prepare—Ethan is also in charge of tech and programming classes, AV Club, and Photo Club—the first session was more than a little nervewracking. “I. Was. Super. Nervous,” he says. “I don’t rattle easily, but I was SO concerned that they have an awesome first experience with D&D that I was really anxious.”

Rather than focus on classes and character sheets, Ethan had another plan. “I started the girls as level zero villagers (so: pick a race, no class, roll stats, let’s play), and I introduced immediate peril in the game–an invasion of ‘wolf riders’ which aren’t what you think,” he says. “This immediately plunged the girls into high action and didn’t burden us with much of the class related details, so I could get them comfortable rolling dice, role playing, thinking about how to interact with the world, etc.” 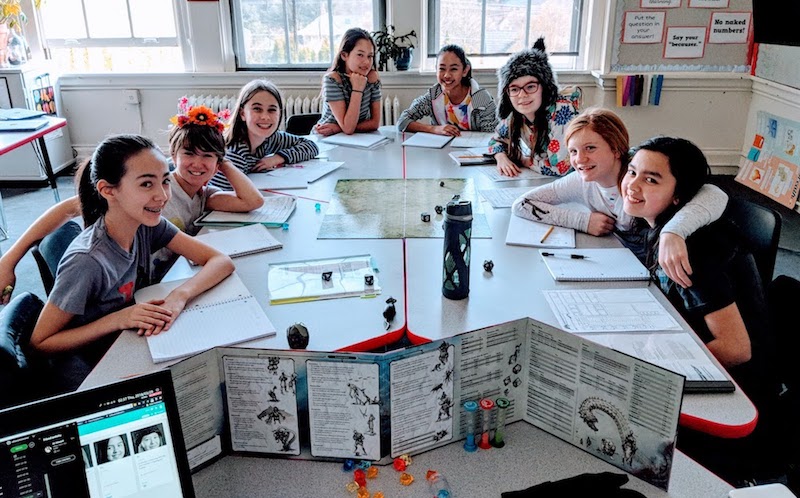 He had a couple of rules from the get-go, including no evil characters and trust between the group already established so that everyone felt included. “Additionally, middle school is a time of identity exploration, so I avoid asking for gender of characters, and instead just ask for a pronoun (he, she, or they), and let the girls provide any other details that they wish to.”

The club is still going strong, and when an elective period opened up during the year, a dean approached Ethan with the idea of making it a Dungeons & Dragons class. There are now two groups of adventurers exploring the game at LWGMS.

“Initially, I focused on getting the girls comfortable playing, which has its own inherent social-emotional benefits,” he says. “I’ve been building in more math and other subjects that can hang off the engagement that D&D provides.”

Other than the social benefits, Ethan also focuses on math as supplemental learning to the creative aspects of the game. “One math example is that we don’t use the modifier table, and instead the students have to learn the equation m=(a-10)/2 and calculate it in their head when they roll a check,” Ethan says. 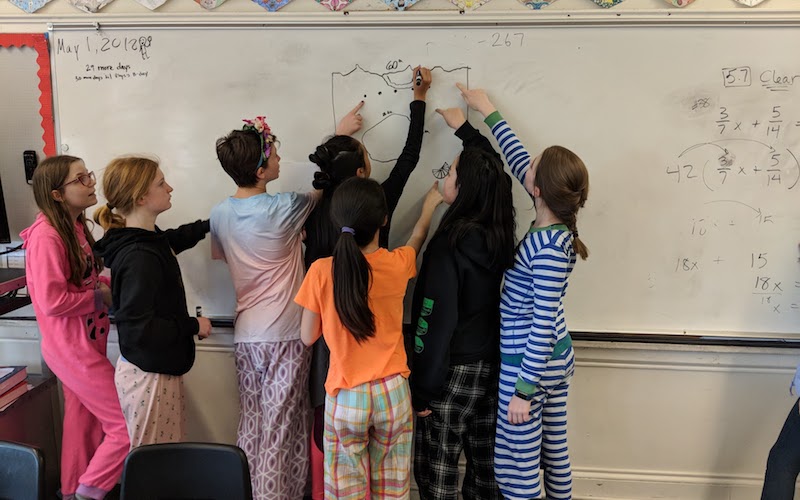 “Another example is that I have them calculate area of chambers based on size, and even had them work out the volume of mist in a chamber based on size and depth of the fog itself. I awarded inspiration points based on who calculated it correctly.”

(Inspiration awarded for math skills is rather brilliant. Scanlan would approve.)

Ethan also sees the potential in tying other subjects to a D&D game, like history, ecology, creative writing, art, political science. The girls have also learned how to organize not only their game materials, but their group and its interactions, he says.

“They problem solve in game and problem solve ‘meta-game’ interpersonal conflicts when they arise. The tabletop game skills translate directly to interpersonal skills. Many of the girls are fast friends now, and this crosses grade levels, which is unusual in middle school. Girls that were quiet and shy are now leaders at the gaming table, and I can’t be more proud.”

A Visit From Some Wizards

The D&D Club’s efforts and enthusiasm haven’t gone unnoticed. Thanks to the delightful pictures he’s shared on social media, it’s obvious the genuine joy the game brings to everyone involved. Wizards of the Coast designers Jeremy Crawford and Kate Welch even stopped by recently for a “D&D Café” to answer questions about game design. 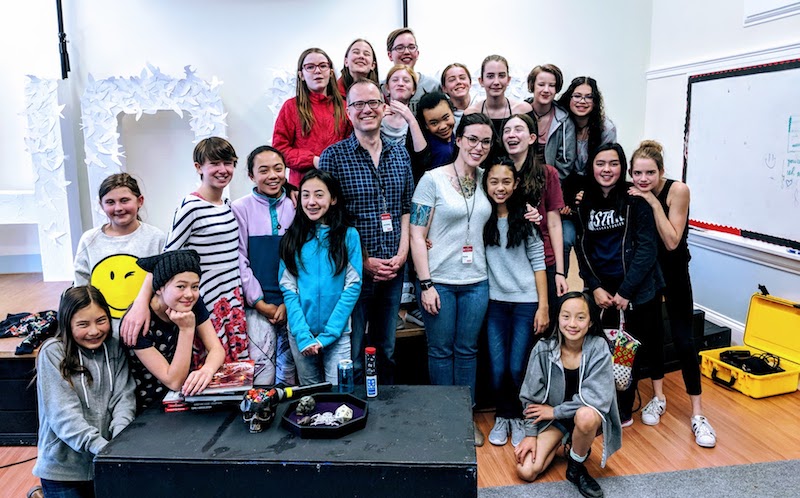 “When I saw Ethan Schoonover’s tweets and photos about his D&D club and elective class, I had to meet these amazing girls,” says Kate. “They blew me away–they’re brilliant and funny, and I hope we get to visit them again and maybe play some D&D!”

Start Your Own D&D Club

If you’re inspired to help start a club at a local middle or high school, or just running a game for tweens and teens, Ethan suggests keeping it simple to start. “Keep the first games with new students a little bit ‘on rails,'” he advises. “It’s okay to not fill out the whole character sheet right away! Consider starting as villagers and build up to level 1.” 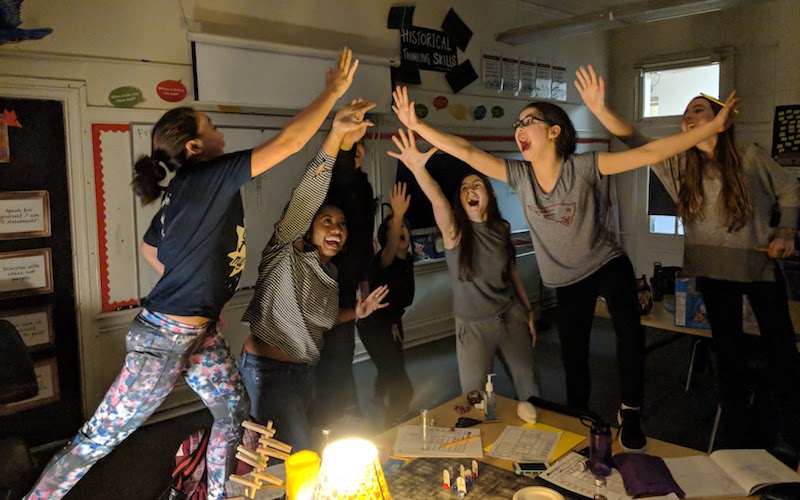 He also encourages using the old school standby of raising a hand to speak when someone really wants the group’s full attention; this helps players who might be feeling lost in the group chitchat.

“My overriding principle is that I want these girls to have a sense of ownership of the game,” Ethan says. “D&D is theirs now. It’s up to me to make that happen.”

What inspiring community gaming story should we showcase next? Tell us about it on social media via Twitter or Facebook, or leave it in the comments below!