Gamer’s Gambit in Danbury, CT features bright green walls inside their store, and bright, happy smiles on their customers’ faces. Owner Stephen Carpenter has been playing games his whole life, with warm memories of playing board games with his father as a child and Magic: The Gathering as a teenager. “I really fell in love with gaming, and it carried into my adulthood,” says Carpenter.

When life led Carpenter from his career at IBM to a crossroads, he took a chance on being a small business owner. “I pooled together some money with my business partner, who has owned the Dragon’s Den in Poughkeepsie, NY since 2006,” he says. “I wanted to be my own boss. As it turns out, I traded my cushy office job working 39 hours per week at IBM with one boss, for a job working 80+ hours per week for 8000 bosses – my customers.” 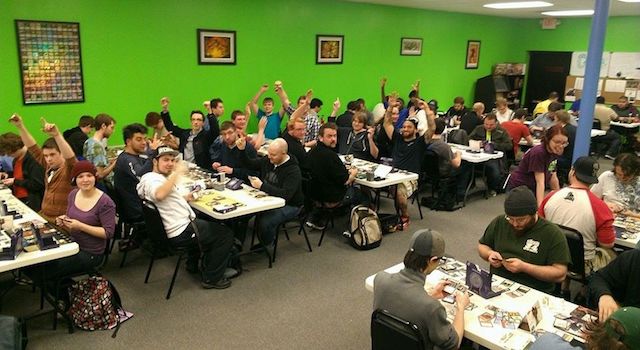 Carpenter describes Gamer’s Gambit as a “community hub,” bringing together players of all ages and backgrounds with a common love of gaming. The staff is enthusiastic, knowledgeable, and friendly, he says, and together they work hard to help forge lasting friendships of their store patrons.

“I take pride in creating relationships between people that never existed before I opened my store,” Carpenter says. “I collect pictures of people who became friends after meeting each other at Gamer’s Gambit to play games.”

Last year he saw the power of the friendship between gamers firsthand. “We had a player named Blake leave us and move to Kentucky,” Carpenter recalls. “Blake was very special to the store. He was 18, but is autistic and has learning disabilities where he operates at a much younger age.

“On his last night playing in the store, the Yu-Gi-Oh! players colluded to throw their matches against Blake and let him win the tournament. It was the happiest day of his life, and the first time he ever won an event.

“The staff had no input on this other than the cultivation of the community we have grown here at Gamer’s Gambit. It was a proud moment for me, my staff, and our gamers.”

Tell us about your friendships forged at the FLGS in the comments.