You couldn’t find a pair of friends more different than Caleb Widogast and Mollymauk Tealeaf. One is the quiet and studious one, the other has all the flair and panache of a peacock. One remembers everything, one remembers nothing. But they’re both firebrands–in their own ways. A trio of Critters (and some new friends they picked up along the way!) paid tribute to the two strong-willed members of the Mighty Nein in that time-honored tradition of an EPIC AF RAP BATTLE.

The trio of friends behind the fan video are Danny Dourado (Caleb Widogast),  Gemma Murcott (Mollymauk Tealeaf/Nott the Brave), and Kieran Burling (composer/audio editing). Danny wrote the lyrics and performed the rap, and Gemma created the incredible costumes. They chatted with us about making the video and what it’s been like seeing the reactions from the Critical Role cast and community. (Spoiler alert: Wunderbar!)

Danny has been a fan of the show since the first campaign. In fact, a certain gnome inspired his own D&D character (pun intended). Danny tells us that while he’s unable to sing, he played a bard his own way while paying homage to Scanlan Shorthalt. “Inspired by Sam Riegel, my first PC was a tone-deaf halfling bard,” Danny says. “I can’t sing, so I wrote inspiring raps for six months.”

Gemma started watching Critical Role as the second campaign began after hearing Danny relay all the highs and lows of Vox Machina. “I was dying to get into it, so when Campaign 2 began it felt like a great place to jump in, so I did and was instantly obsessed!” she says.

Gemma and Danny are friends who live in different countries, so when the opportunity came for Danny to travel to Australia for PAX Australia and Supanova, they decided to make the most of it and film a video together. Gemma had already decided to cosplay Mollymauk.

“Molly was love at first sight for me, I was fascinated by his carnival aesthetic, the whole blood hunter class, the idea of tieflings – everything!” she says. “He’s a cosplayer’s dream/nightmare at the same time with all that colour and plumage (cheers Taliesin!).”

With Mollymauk set, it was time for Danny to choose his opponent.  “The decision ultimately was just who we could pull off. I actually started writing Mollymauk vs. Fjord thinking he was easier to dress me up as. Until Gemma pointed out the leather armour and body paint…”

The video began with Danny and Kieron putting together the music before leaving on his trip. “Kieran and I recorded my vocals over three evenings. He would come home from teaching Beethoven and Mozart on violin to record a D&D rap in his bedroom,” Danny says. He wasn’t happy with his first version of Molly’s accent, but with Gemma’s encouragement he tried again until both Caleb and Molly’s voices sounded perfect.

“Kieran mixed the song back in England over a couple of weeks,” Danny recalls. “It was his first attempt at rap/hip-hop and he NAILED it. Every sound, the pauses for a good burn, the major key for Molly and the minor key for Caleb. That grungy 90s feel. He is a gift.” 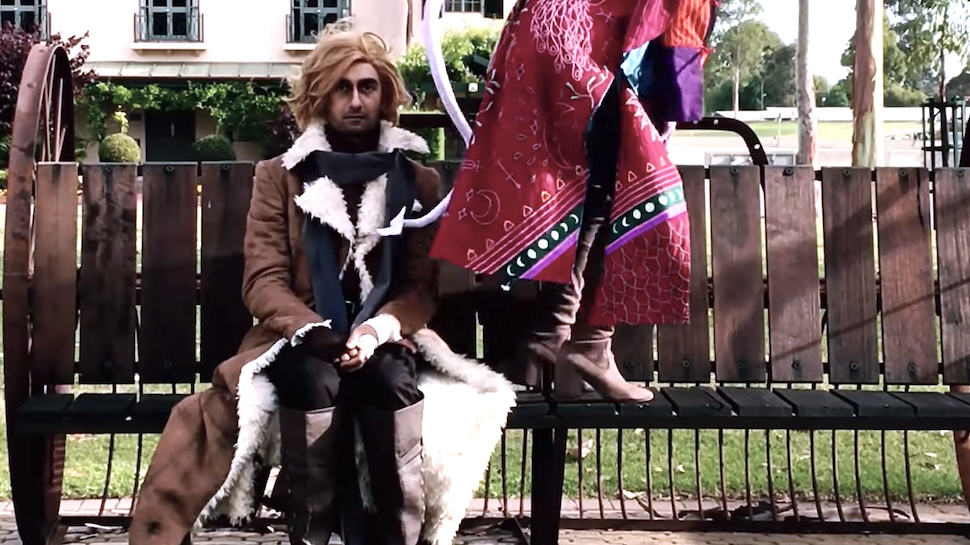 Gemma and Danny originally expected it would be a quick video shoot, but the chaos of two major conventions had a bigger effect than they anticipated. But out of the craziness, they found new friends and unexpected help with the video.

“The amazing cosplayers you see, Caduceus, Beau and the two Jesters, we met for the first time at the conventions,” says Danny. “They all agreed to be in the video on spur of the moment!”

The rap battle debuted shortly after, and a wave of cheers and laughs greeted the surprised Danny and Gemma, not just from the Critical Role community–but from the cast as well.

This is one of the greatest things this community has ever created for us. Pure fire. ? @nerdbynight2 @Rapping_Bard, you guys are basically gods. https://t.co/AyrH34NiYk #CriticalRole

Everything was worth it for this. https://t.co/DsxvnVFy16

Sincerely…I have been non-stop laughing at this for 30 minutes. SO GOOD. https://t.co/alWUtYSF93

“Every day we are treated to a flurry of compliments from amazing Critters,” Danny says. “It’s especially fun seeing Kieran, someone outside Critical Role, in constant awe at the appreciation storm that has taken over from this community! Critters are the best fans in the world.”

“I don’t think we ever could’ve predicted such an overwhelmingly positive response,” says Gemma. “It’s wonderful. The cast have given us all so much entertainment and inspiration, it’s the least we can do to try to give a little back!”