Everything You Need to Remember Before BLACK LIGHTNING Returns - Nerdist

Everything You Need to Remember Before BLACK LIGHTNING Returns

Black Lightning season three is just around the corner and there’s a lot going on in Freeland—and beyond. So far, the series has solely focused on the mostly meta-human Pierce family as they deal with the social and economic issues in their community, including the A.S.A.’s shady experiments. The rise of two new heroes—Lightning and Thunder—alongside their seasoned superhero father has been an awesome journey filled with faith questions, love, heartbreak, and balancing heroic actions with their righteous anger. Now the hero trio, Lynn, and Gambi will cross over into the Arrowverse in the Crisis on Infinite Earths arc. And a recent Black Lightning trailer suggests that the journey to get there is going to be deadly, painful, and dark.

It’s only been about seven months since last season’s finale but it feels like forever because of the constant onslaught of new series, movies, and comics. What happened at the end of season two? What key points do fans probably need to remember to carry them over into this season? And, what are some of the biggest questions going into next season? Consider this post your perfect primer for Black Lightning season three.

Here’s what happened in the season two finale: Tobias stirs up his new meta minions and the pod kids, hoping to cause a mass riot so he can rule Freeland. He is a man with a plan but no team because his random rage caused Cutter to leave for parts unknown. Meanwhile, Dr. Jace disappears from police custody after the mysterious teleporting bounty hunter transports her to Markovia. Black Lightning and Thunder work to contain the metas while Jennifer makes a recovery after exerting too much energy—and nearly barbecuing Gambi.

Thankfully, Jennifer and Gambi are okay and able to restore power back to the city. Like Anissa, Jennifer is about that action so she pulls up on Tobias to get sweet deadly revenge for Khalil’s death. Black Lightning shows up, stops her kill mission, and incapacitates Tobias long enough for him to be arrested and sent to The Pit—a meta-human prison. The future of Lala remains a mystery after Tobias takes him out with some magic words so he will probably be back—and possibly on Black Lightning’s side.

The pod kids are found and returned to their previous stasis. But Odell is also holding a few unexpected people in the pods, including Issa, Wendy, and (GASP) Khalil. He’s truly the Kenny of this series.

The Pierces have some sense of accomplishment, peace, and stability but those feelings only last a moment. Agent Odell comes out of the literal shadows to ruin everything by revealing he knows about their identities. He tells them that the Markovians are coming to Freeland because the concentration of metas makes them a threat. The Pierce family will be forced to fight for the A.S.A. lest they want to be blackmailed… or worse. The end.

The trailer obviously picks up some time later based on Jefferson’s scruffy facial hair and imprisonment alongside Lynn. It remains to be seen if there will be any flashbacks about how they ended up in this holding facility for metas but now we all remember why are there and what’s coming up.

Why didn’t the A.S.A. take the entire family?

Anissa and Jennifer are both free even though they have powers. Perhaps Jefferson struck a deal for them to leave his daughters out of it (for now) or maybe Gambi was able to protect them when it was time to “round up the troops.”

It seems like Odell would know about Gambi if he has figured everything else out, but there’s no indication that Gambi is under surveillance. Also, Odell may have decided to not take the whole family at one time to quell suspicions about what’s going on.

What role will Khalil play in season three?

Khalil looked terrible and dead just a few episodes ago, so it was shocking to see his face again. The A.S.A. must have grabbed his body from the hospital shortly after his “death” and replaced it with a fake. But for what purpose? They could have easily let him die, so they must have a use for his powers. It’s likely that he will remember his life prior to being in a pod because other metas like Wendy were able to recall their moments from decades prior.

But there’s also a chance that the A.S.A. has figured out some way to contain his memories so they can use him like a weapon. If this isn’t the case, then Odell is likely controlling him with blackmail. Khalil still has a grieving mother in the world who can be used as a bargaining chip.

His involvement in the war technically puts on the same “side” as Black Lightning’s family but his relationship with the Pierces may be broken again. Actor Jordan Calloway teased at SDCC that Khalil/Painkiller—who was noticeably absent in the trailer—would be different in season three. His return sets up an interesting story line for Jennifer, who just got a bit of closure surrounding his death, and could lead to an epic rematch against the always vengeful Tobias.

Who are the Markovians, anyway?

The fictional country of Markovia became a larger part of Black Lightning‘s TV universe this season with the Markovian doctor Helga Jace. Two Markovia secret service members also attacked Anissa and Lynn in a supermarket parking lot. This incident revealed that Markovia has some sort of diplomatic immunity, which isn’t good considering the country has plans to invade Freeland.

The Markovia mentions don’t mean a lot to fans who aren’t familiar with the comics but it’s always good to have a little background history to fully understand what’s going down. In the comics, Markovia is based in Europe and ruled by the wealthy Markov family.

The country eventually works with the Outsiders—a superhero collective including Black Lightning, Thunder, and Markovia’s Prince Brion aka Geo-Force—during a meta-human arms race. The competition to have the most metas is certainly happening in Black Lightning. It remains to be seen which side the Pierce heroes will take.

Markovia may be this season’s “big bad” but they could be the lesser of two evils. Either way, there’s going to be massive conflict with a larger price to pay. 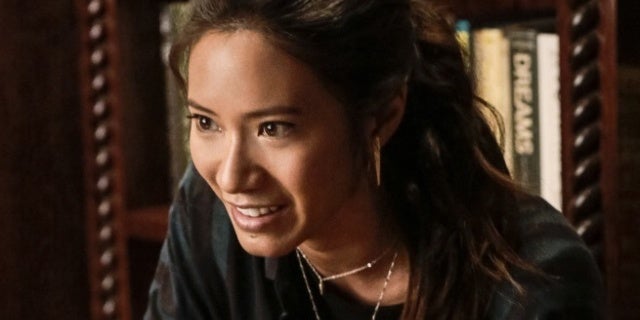 Grace Choi’s Black Lightning storyline has disappointed a lot of fans. Her mysterious powers and relationship with Anissa were finally unfolding before she abruptly ran off. Now, with the Markovian war and other issues on Anissa’s mind, her search for more answers about Grace seems to be at a standstill.

But showrunner Salim Akil’s interview with TV Insider reveals that Grace Choi will return and always remain on Anissa’s side. The question is when it will happen and if she will play a role in this war.

Black Lightning season three drops on October 7 at 9 p.m. ET so get ready for the first family of Freeland’s biggest challenge yet.