These Magic: The Gathering 'Eternal Masters' Cards are Better than Rare - Nerdist

These Magic: The Gathering ‘Eternal Masters’ Cards are Better than Rare

Hi! You may remember me from the Shadows Over Innistrad preview article right here at Geek & Sundry a few months back. I’m here to talk about two cards from June’s hot Eternal Masters premium Magic: The Gathering reprint set. Eternal Masters will contain cards from throughout Magic’s history, with a focus on cards that haven’t been reprinted in a long time and cards that have never had a premium foil version before. Each pack will have a guaranteed foil card of any rarity, as well as the usual commons, uncommons, and a rare or mythic rare.

There are two green cards in particular that I’m focusing on from Eternal Masters. Two cards that are better than rare, especially in a draft or sealed format.

What? Why is a green common and uncommon better than rare? Because they’re amazing bombs in draft play that are often picked first ahead of many rares and even mythic rares. What makes them better than rare is you might see them multiple times per draft, and each copy in your deck makes your deck’s engine hum even louder. 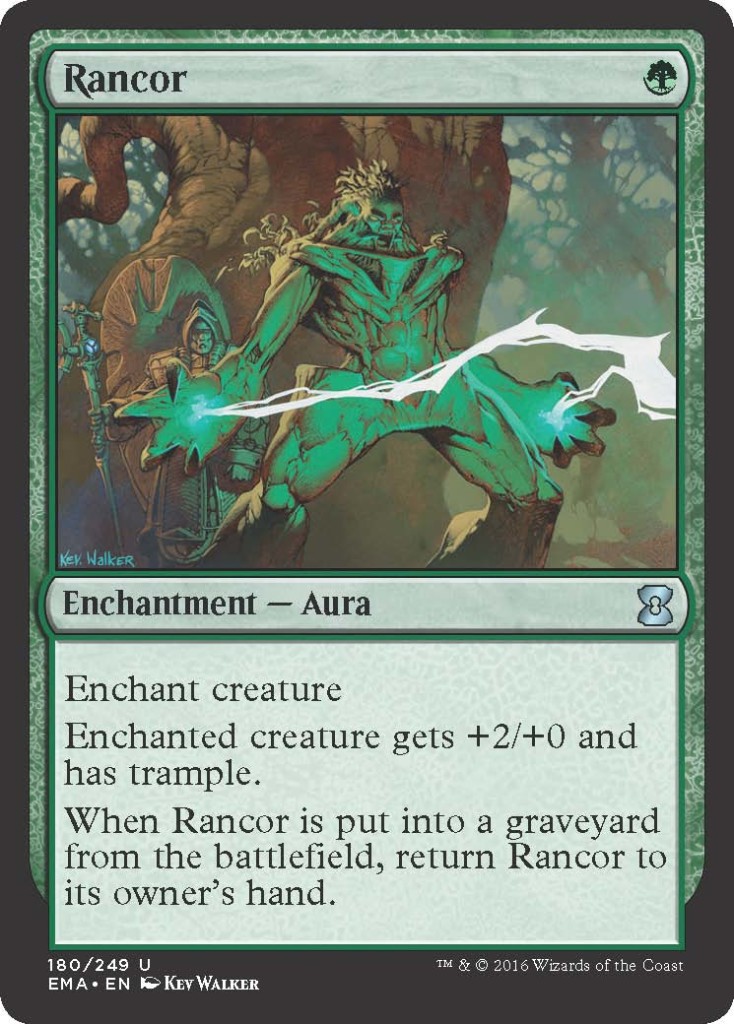 Ah, Rancor. This little Enchantment has always seen a ton of play across multiple formats. This card once cost 1 and a green (two mana altogether) in development in its original set, Urza’s Legacy, but a mishap caused it to be printed with just one green symbol and no number, and it was left that way. Rancor even came back in Magic 2013 since then. In the Modern format, where every regular expansion set from 8th Edition onward is legal, Rancor sees quite a bit of play in “Bogles,” a deck based around small creatures with many enchantments that have Hexproof, so they can’t be targeted by the opponent.

Other than the big power boost and cheap cost, Rancor is special in that it often returns to the owner’s hand after the creature or the enchantment dies. If the Rancor is countered, or the creature it’s targeting is killed while Rancor is on the stack, Rancor will still go the graveyard; otherwise, it’ll bounce back to your hand to be cast again later. A well-timed Rancor will often be seen multiple times per game, giving that boost to Power and the all-important Trample keyword to whatever creature it’s on. 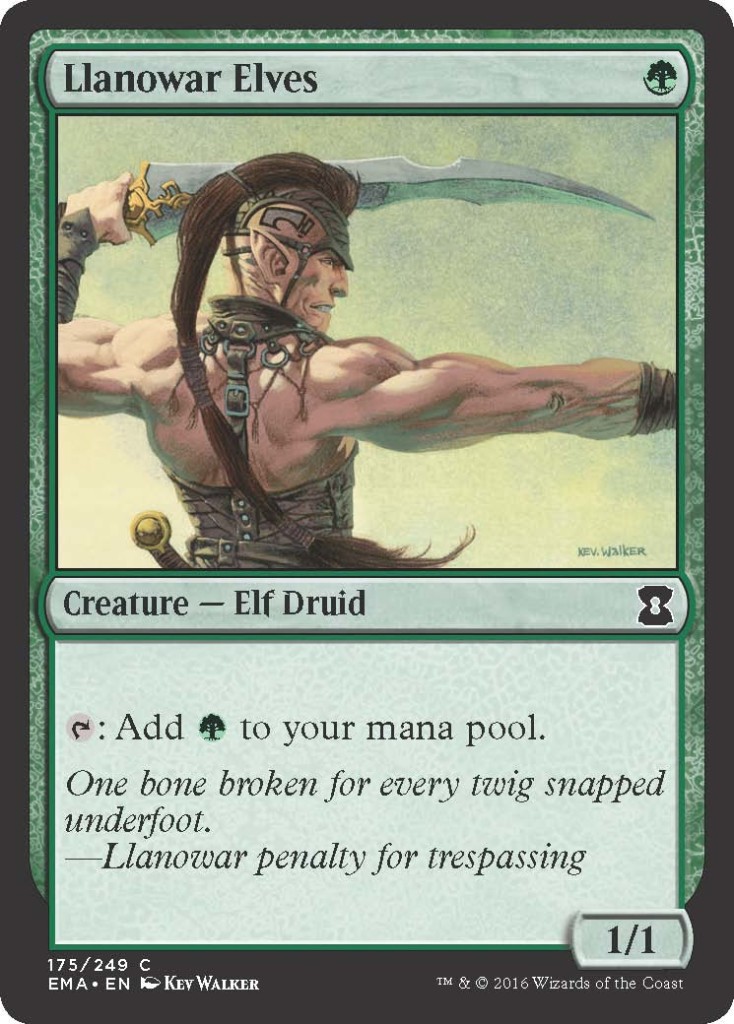 Llanowar Elves. Fyndhorn Elves. Elvish Mystic. Whatever name this card has been printed under, this unassuming 1-mana creature that taps for a green mana has been around since the beginning of Magic, and it’s always been incredibly powerful. So much so that the Magic developers have sworn off “mana dorks” that cost 1 in the Standard format, because they accelerate the player to 3 mana on turn 2 a large percentage of the time. Like Rancor above, Llanowar Elves is a first pick in limited formats. In Modern and Legacy constructed play, players will often stick to the far more versatile Noble Hierarch, but Modern Elves runs a full four copies alongside their many other inexpensive Elves.

If you’re planning to play in any Eternal Masters events (assuming your local store runs any), and you open either Rancor or Llanowar Elves, odds are you’re going to be playing green. And with two cheap, powerful spells like this one, you’ll already be accelerating well past the opponent. And isn’t that what you want to be doing as a green mage in a game of Magic: The Gathering?