The WARHAMMER: AGE OF SIGMAR Card Collecting Game is Here and it's Bold - Nerdist

The WARHAMMER: AGE OF SIGMAR Card Collecting Game is Here and it’s Bold

I don’t care who you are, opening a booster pack is simply sublime. Our brain is conditioned at a young age to release a payload of endorphins at the mere crinkle of wrapping paper. It’s pure psychology (warning: I’m not a psychologist).

I never imagined I’d return to that booster pack treadmill. Millennium Blades synthetically scratched that itch and I thought my life complete. Then PlayFusion’s Warhammer Age of Sigmar: Champions dropped. Now I’m rocking back and forth while waiting for another hit. Part of me wishes the game sucked. (Un)fortunately it doesn’t — this is a stalwart design with unique mechanisms and an addictive structure. Sigmar help us.

This 15-minute head-to-head battler has a comfortable enough pitch. You take turns performing two actions, whittling away at your opponent’s health in order to achieve victory. That yawn fades when you delve into spatial considerations of lanes and champion positioning.

Your quartet of faction specific leaders are deployed in one of four columns. This is important for different abilities and units you place on the table, their effects triggering on allies or enemies in certain lanes. 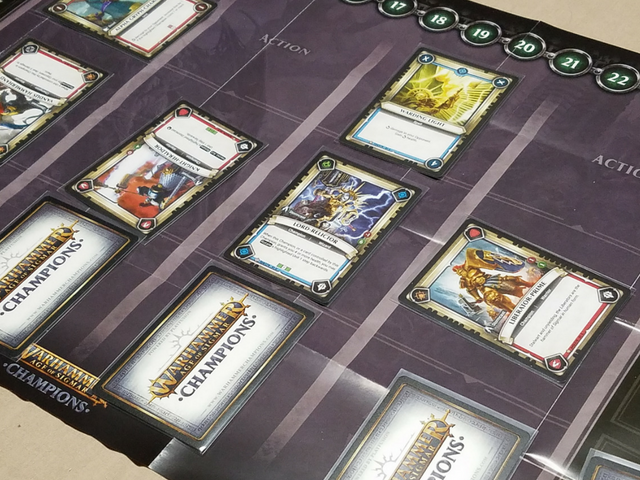 A further wrench is tossed into the muck when assessing the wild rotation mechanism. Most cards have numeric values in one or more of their corners. These relate to text abilities that range all over the place from inflicting damage to drawing cards. Each turn all of your units will rotate counter-clockwise, possibly exposing new attacks or triggering new abilities.

This suite of unique traits has been built from the publisher’s previous system Lightseekers. They’ve taken that formula and twisted it here to fit the Warhammer universe. It surprisingly feels as though the two were a perfect match. The care and knowledge of setting repeatedly rises to the surface, coloring each element of play.

It is worth taking a moment to recognize the limitations of the graphic design. This is an information-heavy game and it’s a shame that you need to read the ability text to understand the corner values. A simple attack icon behind corners that inflict damage and a shield behind those that defend would have reduced reading the compact prose. Eyeballing those sentences can be particularly painful when a card is rotated and the text tilted on its axis.

Nevertheless, the mechanisms borrowed from Lightseekers allow for a fertile creative design field. Large bulky units like a charging Chaos boar will take several rotations before it inflicts a massive amount of damage, which thematically mimics its building rush. Nearly opposite is a rippling holy bolt which immediately strikes but is removed the following round. 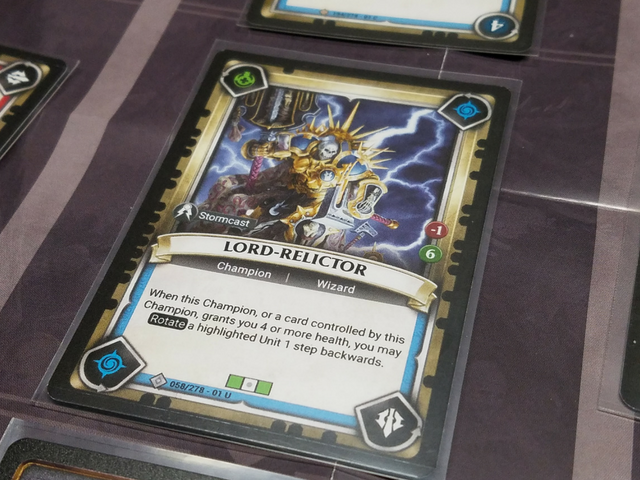 The rotation system is extended to your four representative champions, albeit with a proprietary implementation. Here they serve as mini-objectives such as deploy a unit, remove a card, or inflict damage. As soon as you accomplish one of these goals your champion rotates. Once they 360 you unlock a blessing tucked below them. Blessings have the potential to leave you gobsmacked. They function as the equivalent of those ultimate maneuvers in 2D fighting games. The result is highly explosive damage or massive healing effects.

This strategic path is wonderful. By offering you a great boon to play specific sequences of cards, it causes a tense intersection of tactical pursuits. You may really want to play that Sigmar Paladin to start winding up and inflicting some damage, but the champion on that lane will rotate if you instead play an ability to heal a couple life.

That conflicting set of priorities dovetails wonderfully with a compelling element of hand management. There’s no cost to play anything. No land, no mana, no nothing. You merely toss out a card as one of your two actions and away the Grots go.

The challenge comes in keeping a limber hand. The only way you draw additional cards is by passing your actions. This manufacturers an interesting tempo of upheaval and picking your moments. It embraces strong strategic play with engaging moments of payoff.

One of the smartest elements is in how it atomizes engagement. You’ll have turns where your actions consist entirely of passing, yet the pace never drags like that Vargheist across the table. This is accomplished due to your beginning phase of rotating cards and trigger effects. While you may not actually toss out a new unit or spell from your hand this turn, you will still snicker as you twist your previously deployed Crossbowman and nail Nagash for four points of sweat and blood.

As the layers are peeled back, the true resource at play becomes evident: Time. Cards cycling and releasing their peak effect requires a bit of spin-up. You begin to ask yourself whether you can spare the two turns before that lightning bolt triggers. Is your action better spent drawing a card? These are deceptively meaty choices that have a realized downstream effect on the game’s outcome. It’s fascinating. 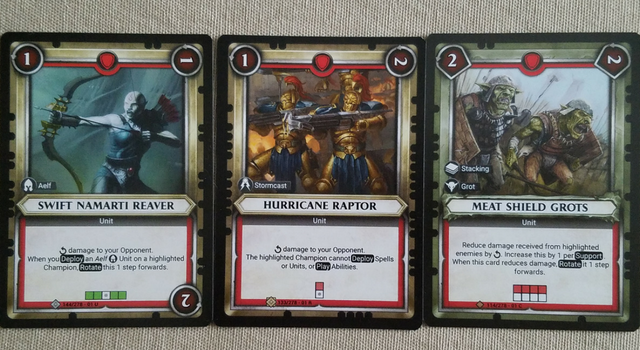 One of the worries heading into this concerned deck-building and chasing boosters. Yeah, tearing open a booster is a huge rush, but that comes paired with the ever-present risk of getting caught up on the unattainable.

Champions works to minimize the damage by presenting a card pool that feels strongly balanced. Pre-sorted starting decks are available for each alliance so you can snag a “Destruction” or “Order” card set with no worries. Additionally, boosters feel well distributed as there are very few neutral cards in the initial wave. You’ll, of course, receive cards you have little to no use for, but this effect seems minor over your first dozen or so packs.

With that being said, there are realities we have to eat. If you desire to run an Idoneth Deepkin or an all-wizard deck — you’re at the mercy of the booster draw. Trading can certainly open this up, but RNG is what it is.

I’ve also noticed that your opening card draw can have a noticeable impact. It’s not enough to topple the experience, but it can certainly create an uphill battle at times. This is sheltered slightly due to the number of decisions you make across play, however.

While card draw matters, skill is paramount to success. I’ve seen starting decks continually wreck tailored sets when players of disparate ability have clashed. Repeated play has born out this observation and proven that skill and timing are key.

Warhammer Age of Sigmar: Champions is a marvel. It offers a unique system that repeatedly pulls you into its depths through clever interlocking systems. This isn’t just a very solid card game, it’s one of the best in recent years. Praise Sigmar.

Are you excited for Warhammer AoS: Champions? Let us know in the comments!  And be sure to join host Becca Scott on  Game the Game every Thursday here on Geek & Sundry to watch the best boardgames played with fantastic guests!