How Jadis May Reveal Rick’s THE WALKING DEAD Fate

Warning: This recap contains SPOILERS for The Walking Dead.

When Pollyanna McIntosh first appeared on The Walking Dead and announced her name was Jadis, anyone familiar with the name instantly wondered what the significance was, especially since the character didn’t appear in the original comics. In genre fiction, Jadis is most notably the name of the White Witch, a primary villain in C.S. Lewis’ Chronicles of Narnia. But aside from being an antagonist, The Walking Dead‘s Jadis didn’t particularly act like the White Witch; if anything, with her broken language and junk-scavenging society, she more resembled Savannah Nix from Mad Max Beyond Thunderdome. As time went on and the Scavengers was destroyed, Jadis assimilated, reverting to her original name of Anne and normal speech patterns.Until now.Â  In “Warning Signs,” she adopts the old name once again, and we finally begin to see the parallels to the character in NarniaÂ stories.The original White Witch is introduced to Lucy Pevensie as an antagonist who brings eternal winter to Narnia in The Lion, The Witch and the Wardrobe. Lucy’s brother Edmund later meets the witch, and is thoroughly charmed by her as she gives him his favorite candy, Turkish Delight. After that, when all four siblings have arrived in the fantasy land, Edmund hears what a bad person the woman he likes is supposed to be, but he can’t believe it. He goes back to her hoping for more candy, but instead faces her wrath for not bringing his family to her. Only too late does he realize her true colors; he becomes her prisoner. 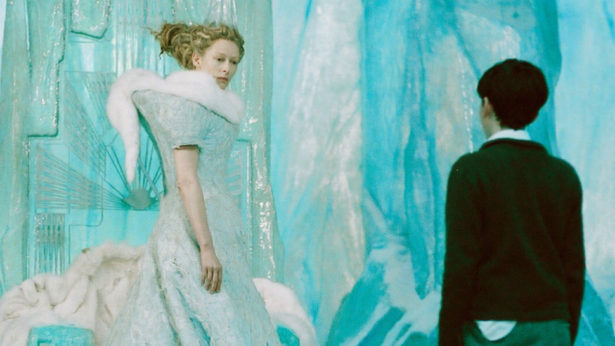 Father Gabriel is Edmund in this analogy. Instead of being drawn in by candy, Jadis captures Gabriel with seduction. Anne/Jadis is still distrusted by the community because they are certain she knows something about the murder of Justin. But Gabriel, who has been duly charmed, has faith that his initial impression was right. And so he goes to her separately, only to find her talking to mysterious benefactors about delivering captives to them. Like the White Witch, Jadis promises Gabriel a place by her side if he betrays everyone else. Like Edmund, he refuses. And as she knocks him out, she indicates he has just proven himself a more valuable prisoner than she expected.Backing up a bit: we learn the White Witch’s origin in the prequel The Magician’s Nephew, in which she is revealed to be the last survivor of a dead world called Charn, just as Anne is the last survivor of a kingdom she once had. The White Witch enters Narnia during its creation, when Aslan, God in the form of a talking lion, is breathing life into what he hopes will be a harmonious kingdom. Jadis becomes the metaphorical serpent in Eden, though in an ironic twist she fails to tempt the young boy Digory into stealing the forbidden fruit. She instead eats it herself and thereby obtains immortality with the caveat that it will only bring misery.Who’s Aslan, the one trying to build a harmonious world with no killing, in this scenario? Well, let’s just say Rick’s beard is looking mighty leonine these days. And here is where the analogy may predict how he will die… 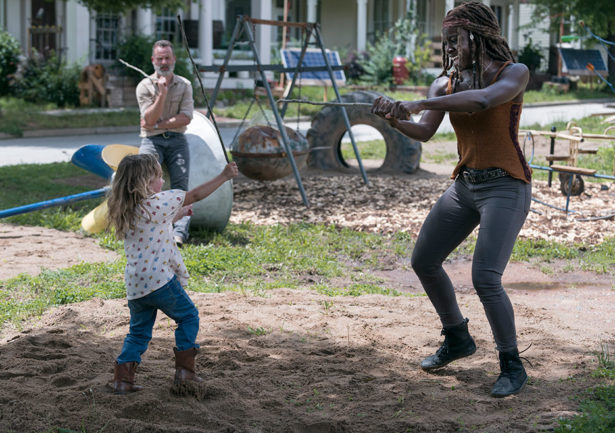 Jadis is indeed a serpent in Eden here, though possibly not the only one. But let’s get back to Edmund. The original White Witch demanded the right to kill the boy under established Narnian law (the equivalent here might be the precedent Maggie set by hanging the treacherous Gregory), to which Aslan responded, Christ-like, by offering himself as a scapegoat sacrifice for Edmund’s sins. He dies, but being a Jesus allegory, rises again.If The Walking Dead follows the Jadis theme to its conclusion, Rick will offer himself in place of Gabriel. After all, it is clear Jadis wants an “A” hostage rather than a “B,” and Rick would be the ultimate “A” (for “Aslan”?). Rick’s new “no more killing” attitude reveals a man who’d rather sacrifice himself than see anybody else die for him.But what about the resurrection? Well, the show is called The Walking Dead, after all, so perhaps Rick will return as a walker.

TAGGED: the chronicles of narnia, The Walking Dead